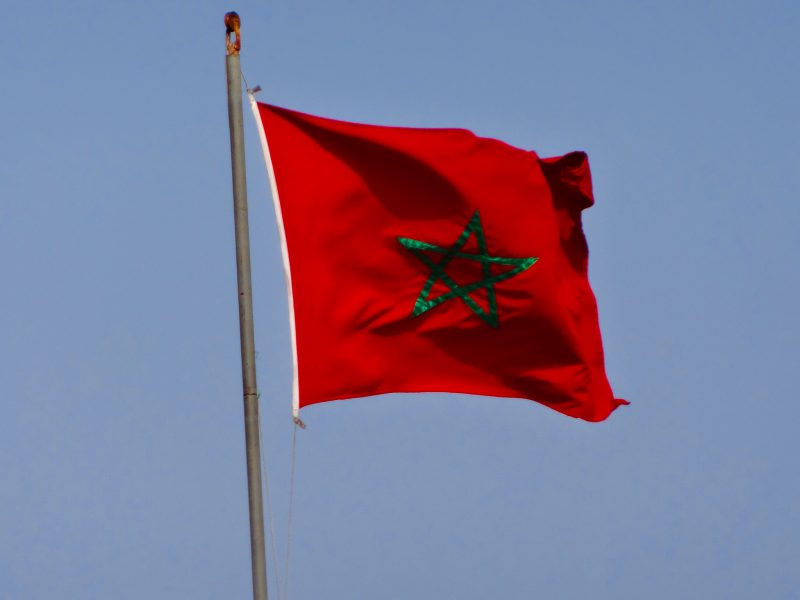 Located on the northern end of Africa surrounded by the Atlantic Ocean as well as the Mediterranean sea, Morocco is rich in heritage and exhibits exotic natural beauty. The country encapsulates Medina, the second holy city of Islam. Having Arabian and European cultural influences, the history of the country holds the many a tales of different eras. 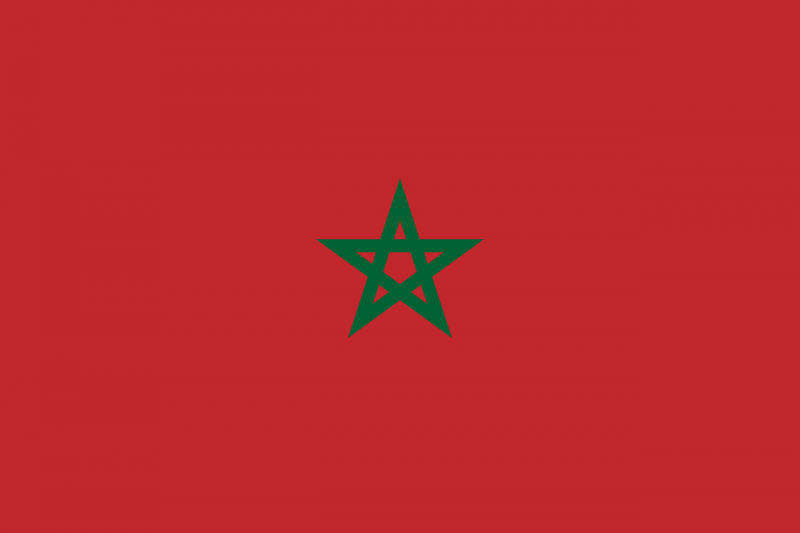 The country of morocco had different flags floating through the sands of time. At present, the flag is completely red in color with a fiver-point star or pentagram at the center. The pentagram is green in color and bordered with black. This flag has been in use since 1915 till present date. The height of the flag is two-third of its width.

2. History of the flag 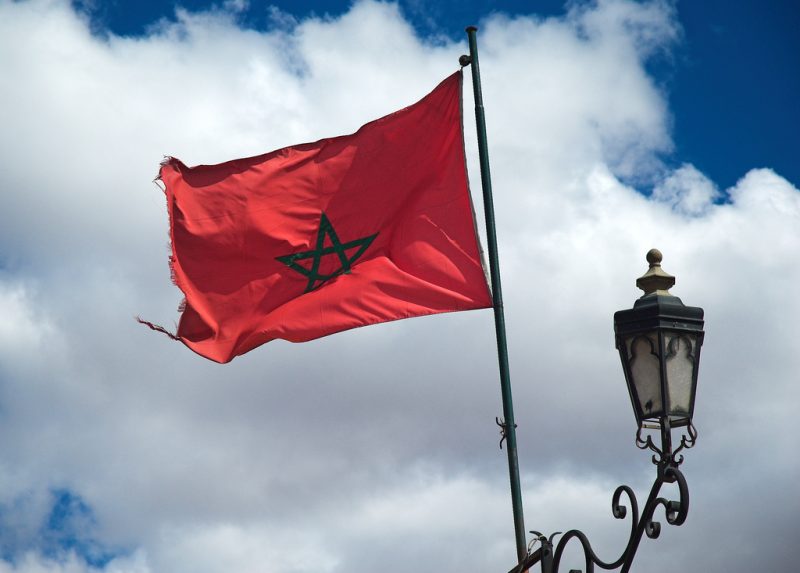 3. Colors of the flag 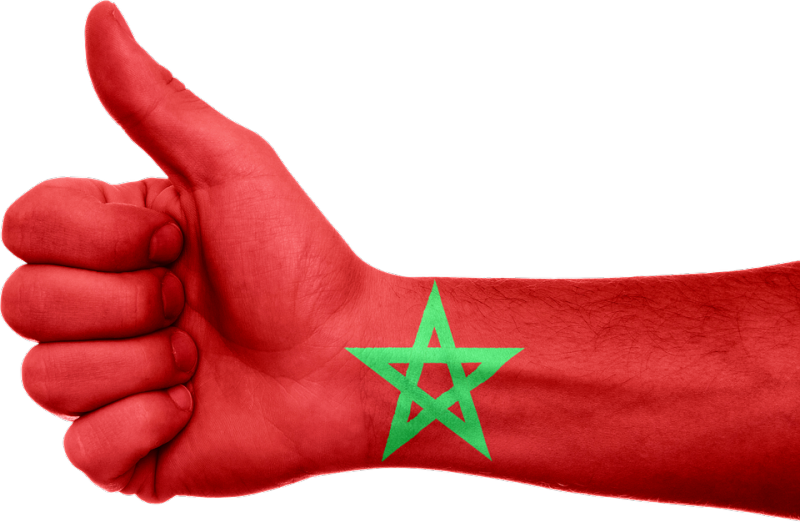 The bright red symbolizes courage, strength, determination while the green stands for love, joy, and hope. The Islamic religion is of significance in Morocco, and the red color of the map is a symbol of the Alaouite dynasty whose descendant was the prophet, Muhammad. The green pentagon is ‘the seal of Solomon’. Green is also the traditional color of Islam. 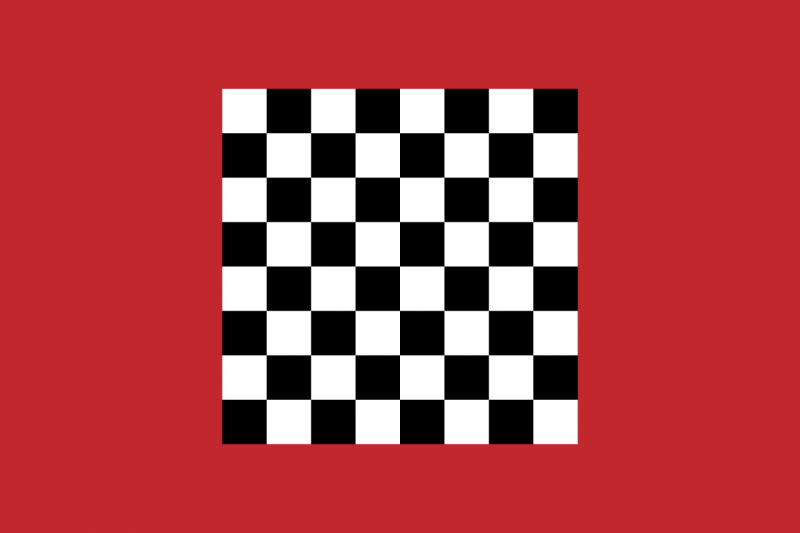 The oldest flag used in Morocco was introduced during the Almohad dynasty (1147-1269).  This flag was used by the ancient rules of  the 11th and 12th century. The flag is red in color with a chess board in the center. It is a 64-square chessboard whose the upper left corner is white. 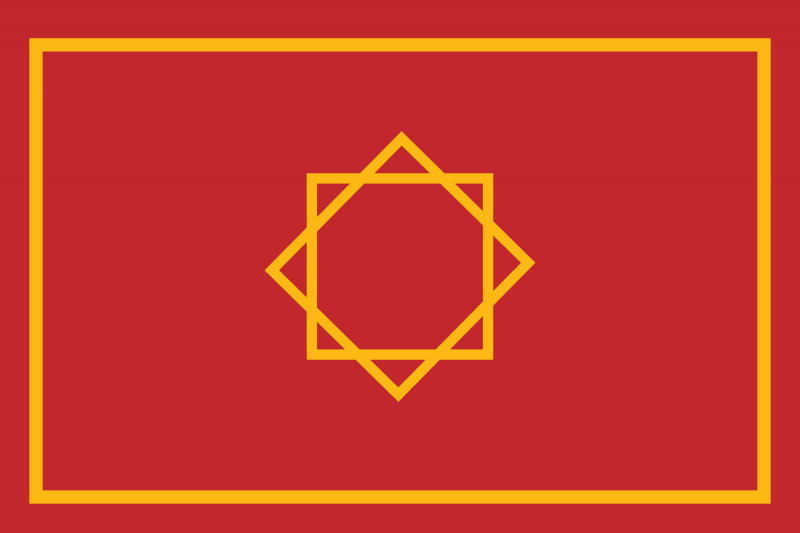 During the Marinid dynasty, this flag was used as a war banner. It is red in color with yellow octagon star in the center. There is a yellow outline along the edges. This design was also used during the Saadi dynasty from 1554-1659. It was used along with a white banner. 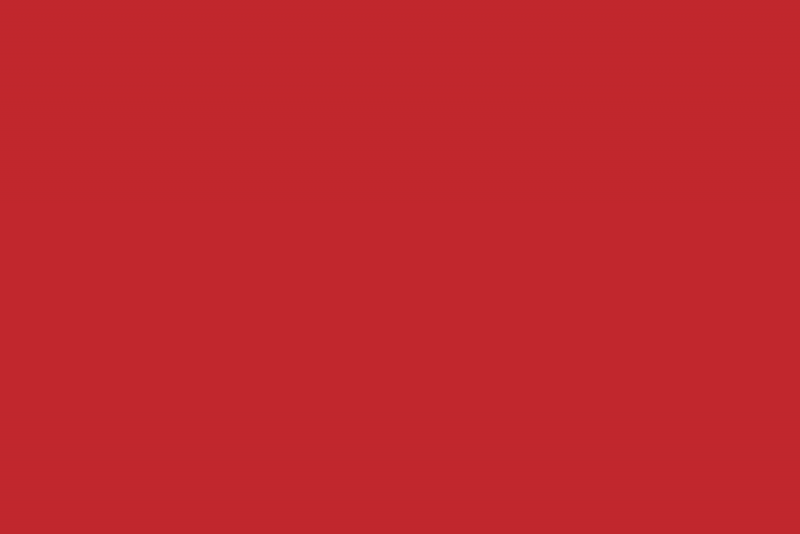 The Alaouite dynasty ruled Morocco from the 1600s and is still the royal family of Morocco. The flag introduced during their reign was completely red in color which symbolizes strength and valor. The Alouite dynasty claims to be the descendants of the Islamic prophet Muhammad.

Though the history during this period is not vividly known, but a read flag with white triangle borders was said to be used. The flag had a pair of white scissors crisscrossed in the center. The flag had appeared in many a different flag charts. Once it was obtained in the Dutch chart and was regarded as the ‘Moorish Flag’ which was later concluded as ‘Moroccan flag’. 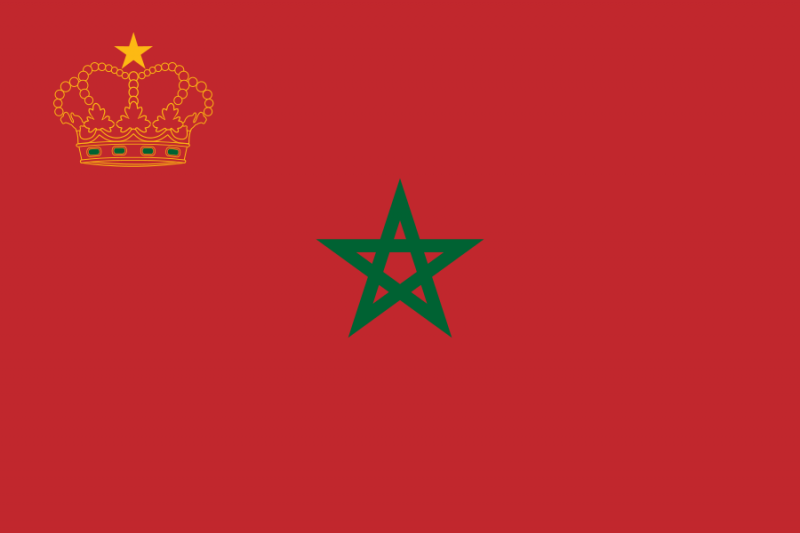 A civil ensign is a flag that is used during trading and at sea . The civil ensign of morocco is fairly similar to its national flag. It is red in color, with a green pentagon in the center and a crown on the left upper corner. The pentagon is larger here, and the crown is yellow in color. 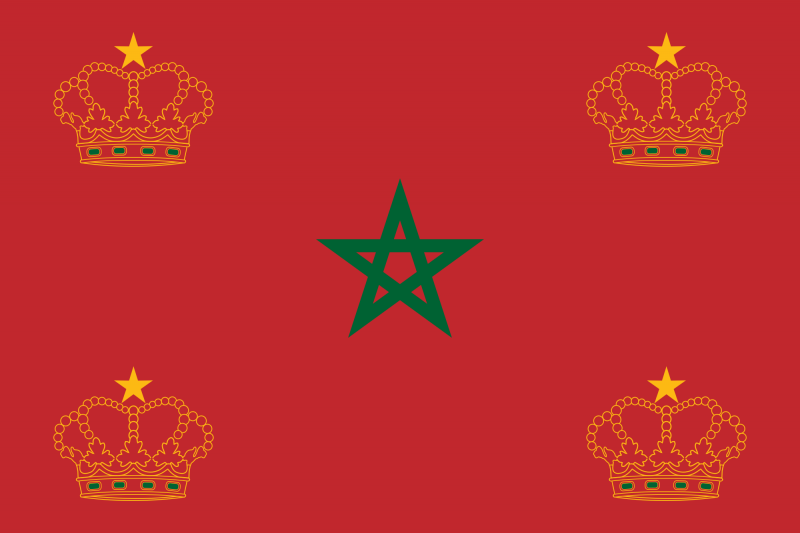 A naval ensign is a flag which is used by the ships of the navy. The Morrocan Naval ensign is similar to civil ensign. It is also red in color with the green pentagon at the center. This flag has four yellow crowns in the four corners, unlike one in the civil ensign. 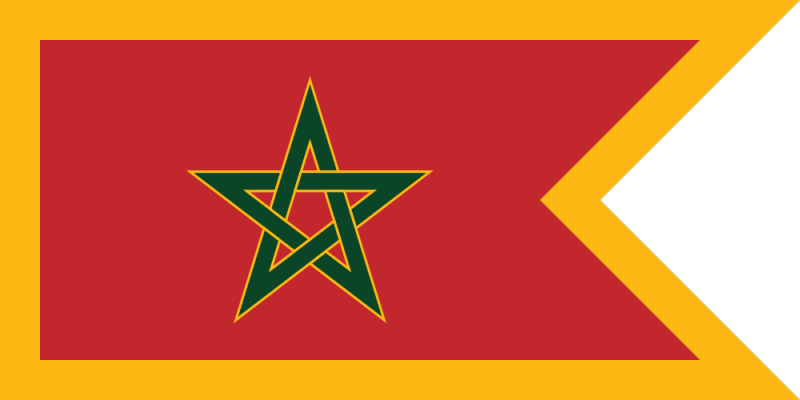 A naval jack is a flag which is flown from a jack-staff of a warship or any other vessel, unlike a naval ensign which is generally tied to the stern. The naval jack of Morocco is swallow-tailed and not rectangular like other flags. It is similar to the national flag , except it has a deep yellow border toward the outside. 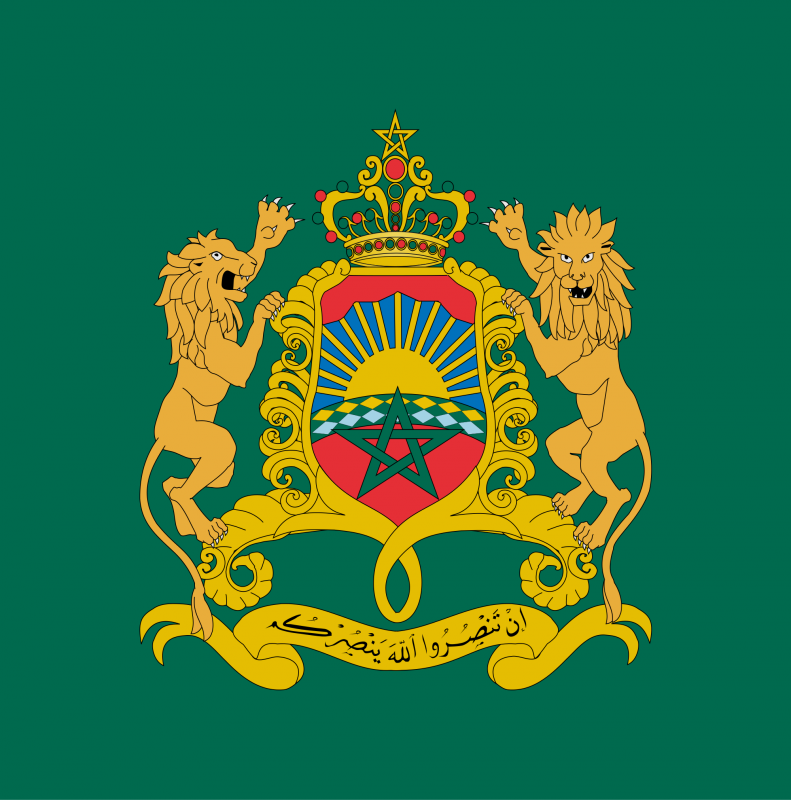 A royal standard is a flag or banner bearing the emblem of the royal family and hosted in the presence of the royals. The Moroccan Royal standard is green in color with a coat of arms in the middle which highlights a shield held by two lions. There is also the green pentagon, the Atlas mountains and the rising sun.

The national emblem or symbol of Morocco is termed as the ‘Coat of arms’. It was designed by graphic artist Gauthier and Hainaut. It has a shield held up by two lions. The shield contains the central green pentagon, the Atlas mountains and the rising sun on the background. There is a ribbon below with an Arabic inscription.

The motto of Morocco consists of three Arabic words – ‘Allah’, ‘Al-Watan’, ‘Al-Malik’. ‘Allah’ stands for God, ‘Al-Watan’ for country and ‘Al-Malik’ for King. All Moroccan must pray to God, respect his country and obey his King. The country emphasizes on tolerance, harmony, peace and mental virtue 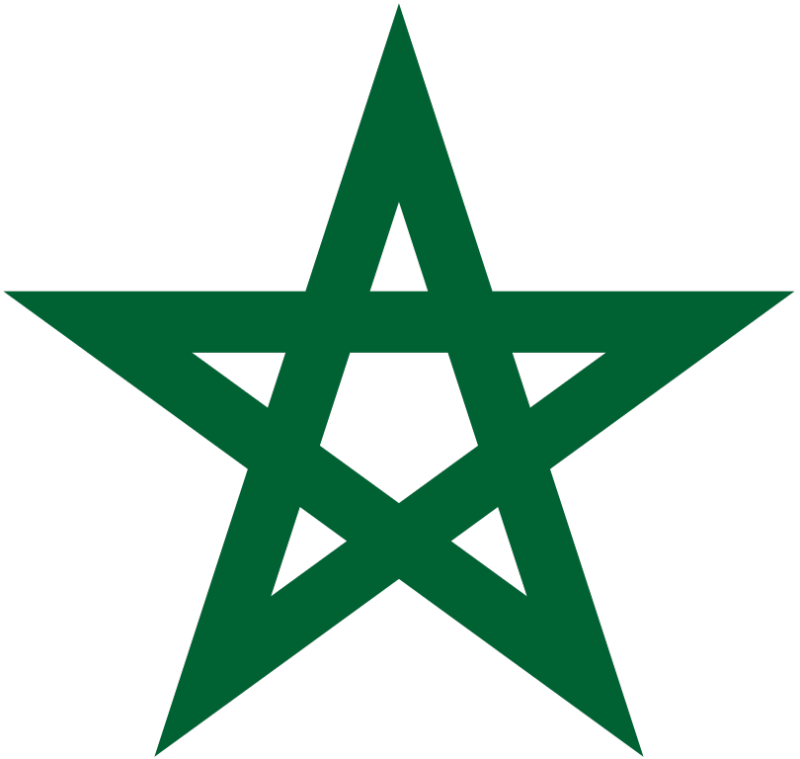 The green pentagram was added to the Moroccan flag during the French rule. However, it continued to persist even after France granted Morocco freedom. The green pentagram represents the link between God and the Nation. The five points of the star represent the five pillars of Islam – testifying to one-ness, prayer, charity, fast and pilgrimage. 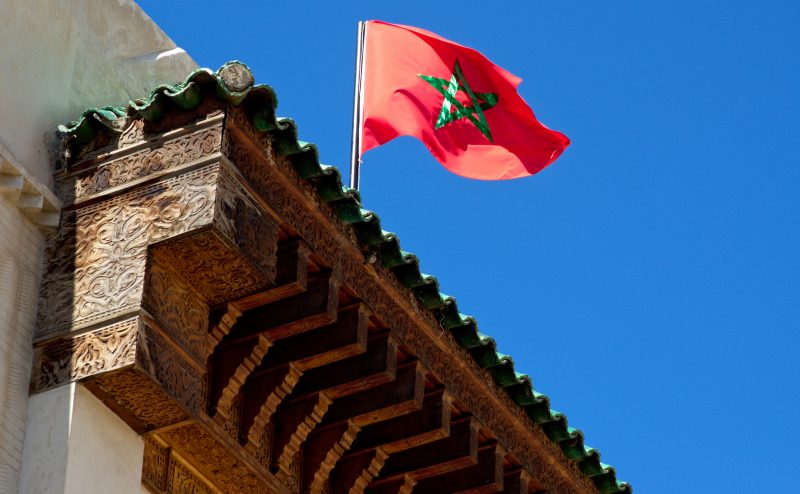 The Independence Day in Morocco is celebrated every year on  November 18th when King Muhammad returned from his exile in Madagascar. Celebrations include colorful parades and hoisting of the national flag and singing of national anthem. It is regarded as an important national holiday emphasizing on the rich historical background.

The different flags during the different periods are proof enough of the country’s rich cultural inheritance. So, pack your bags for Morocco and enjoy all that the country has to offer.
Have a good trip and travel!

10 Things To Do in Taroudant: Morocco

7 Hotels to Stay in Chefchaouen