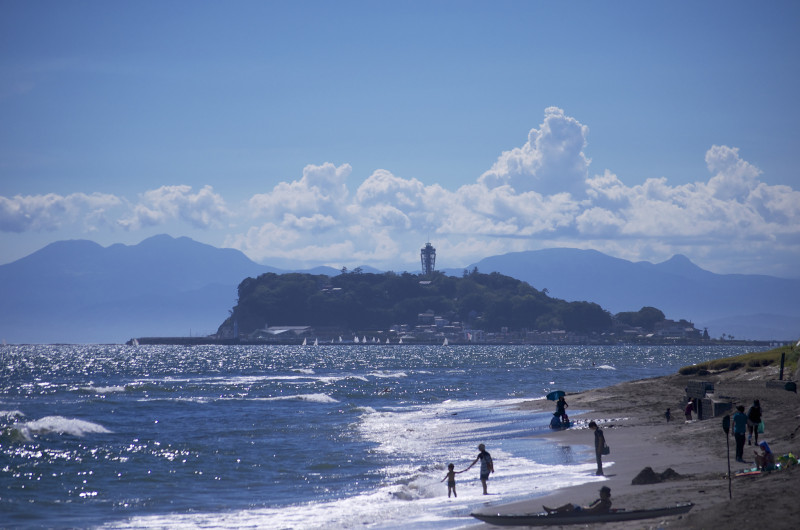 Enoshima is a small island just offshore Kamakura, connected to the mainland by a long bridge. The island consists of a small forested hill and a rocky coast. It offers many interesting attractions, so check out this list of 15 things to do in Enoshima! 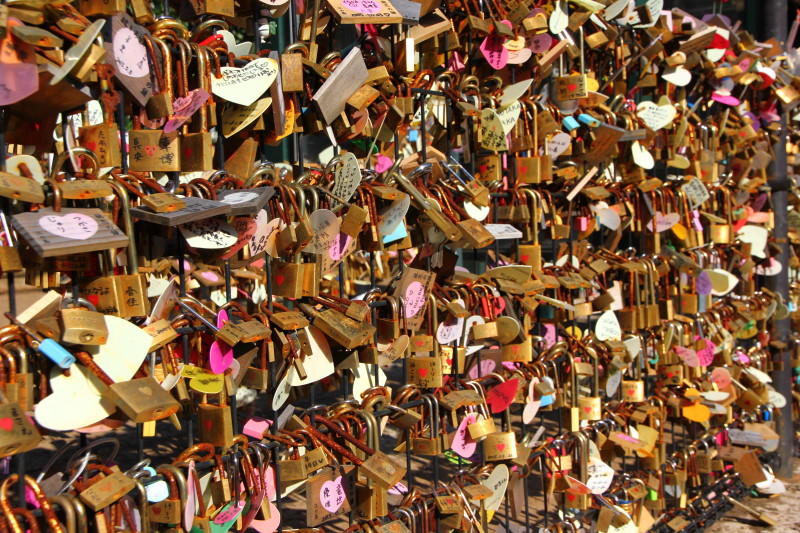 A legend says that Benten, a goddess, rose from the depths of the ocean and created Enoshima to be able to catch a dragon that has been terrorizing the area. But instead of destroying the dragon, she ended up falling in love with him. This is why at the top of the island stands a love bell surrounded by a fence where couples can leave love locks. The love bell and the fence are dedicated to the goddess and the dragon. The locks can be bought at various shops on the island’s shopping street. 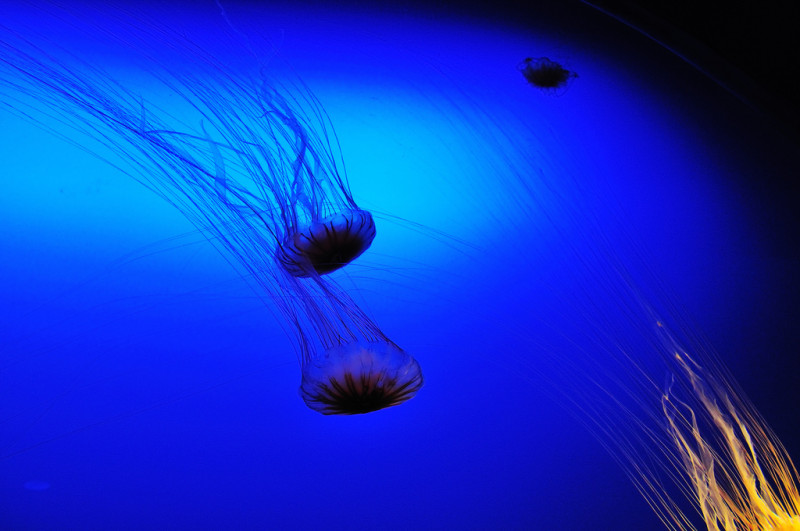 The Enoshima Aquarium boasts many sea creatures from the Sagami Bay, where the island is located, as well as fishes and animals from other parts of the world. Visitors can enjoy looking at jellyfishes, sea turtles, penguins, and seals, or interact with the creatures in the “Touch Pools”. There are also interesting shows featuring dolphins and a variety of fishes. Besides the actual sea creatures, the aquarium has several displays which are meant to teach people about the marine world. 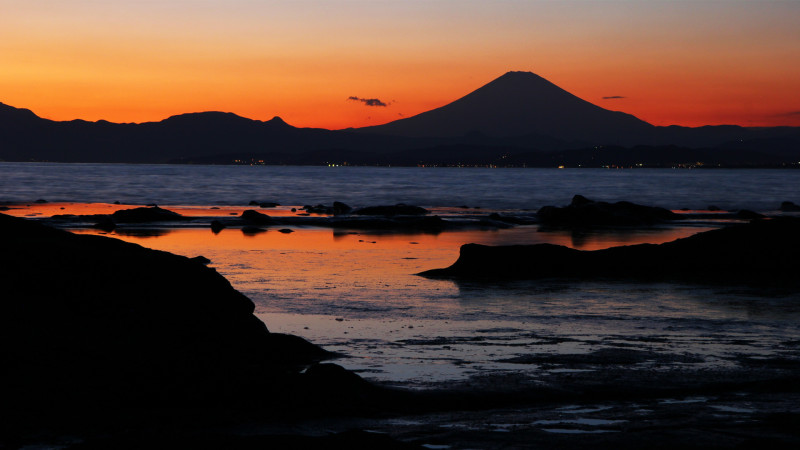 The south of the island consists of a rocky coast that is pretty impressive when hit by big waves. Here you can enjoy an amazing sunset. On clear days, Mount Fuji is also visible, making the view even more spectacular. The best part is that most people go home at this time of the day, leaving the area very quiet. It is an amazing feeling to sit in the silence, and watch the big waves hitting the rocks with Mount Fuji in the background. 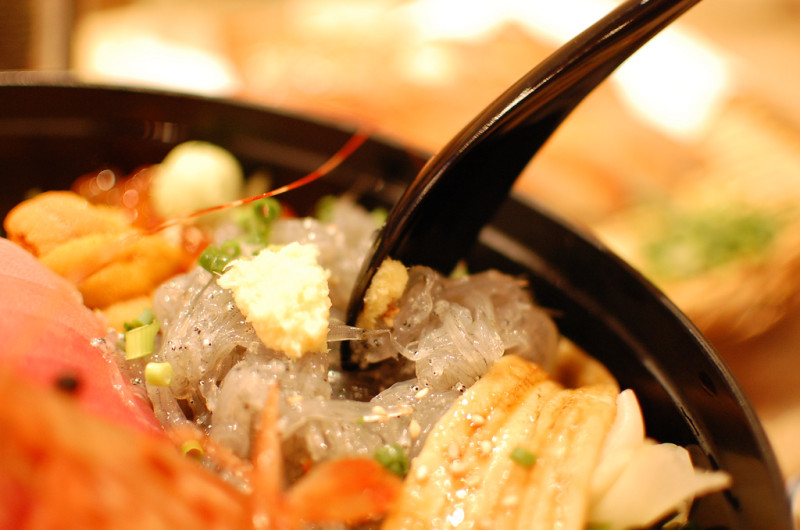 The most popular food in Enoshima is shirasu, which means baby anchovy. Shirasu can be served raw or boiled in various dishes, the most popular being as over a bowl of rice. Other delicacies include: whole roasted octopus crackers, which are made by battering the octopus and pressing it flat, otome manju, which refers to steam buns filled with sweet bean paste and kushinure okaki, meaning fried rice cakes on a stick. These delicious foods can be found at restaurants or food stalls all over the island. 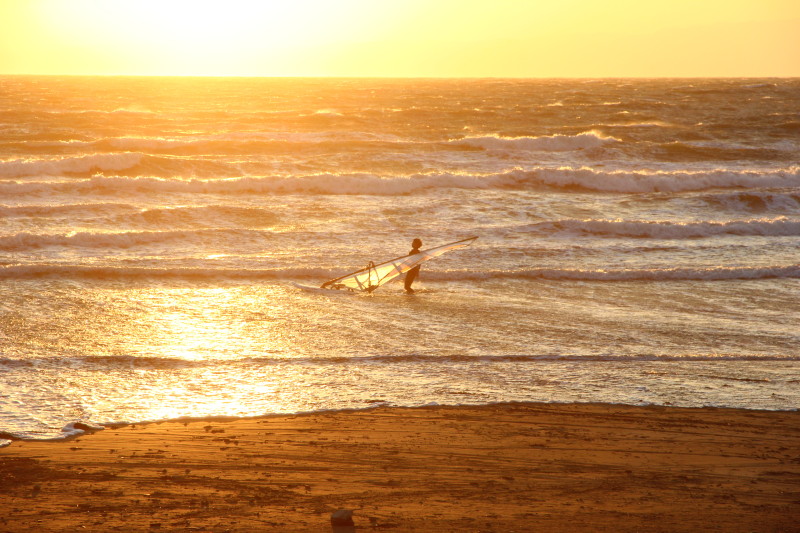 Windsurfing is a water sport that combines sailing and surfing. The equipment consists of a board to stay on, which has a sail attached. The board moves powered by the wind. Enoshima is located in an area where many windy days are registered through the year, creating the perfect conditions for windsurfing. Not to add that the views are also amazing with Enoshima on one side and the Kamakura beaches on the other. You will often see many people practicing this sport on the waters that surround the island. 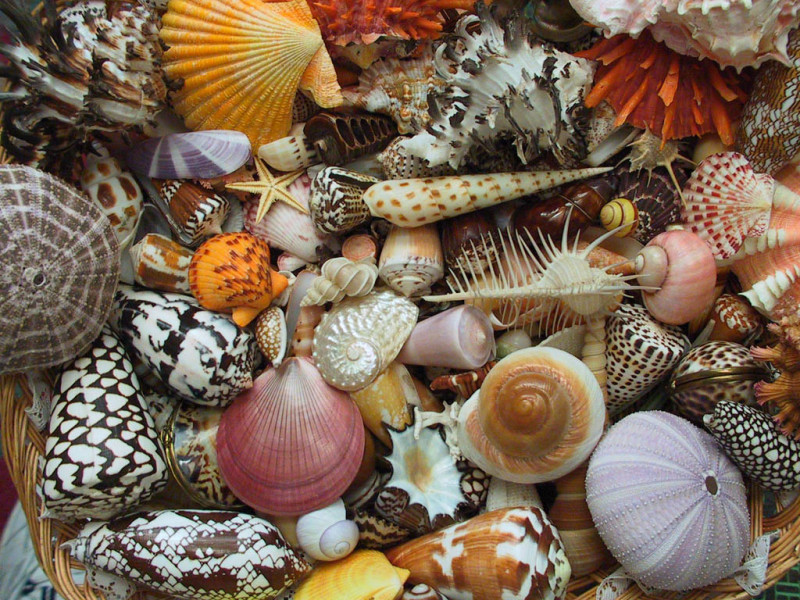 The island is passed through by a long shopping street that starts at the entrance and ends close to the top of the hill. Here you can find many shops with interesting items, perfect to buy as souvenirs: sweets, jewelry, keychains and other small trinkets. But the most interesting souvenirs are those made from seashells gathered from the area. There are many items such as necklaces, bracelets, chandeliers and wind chimes. 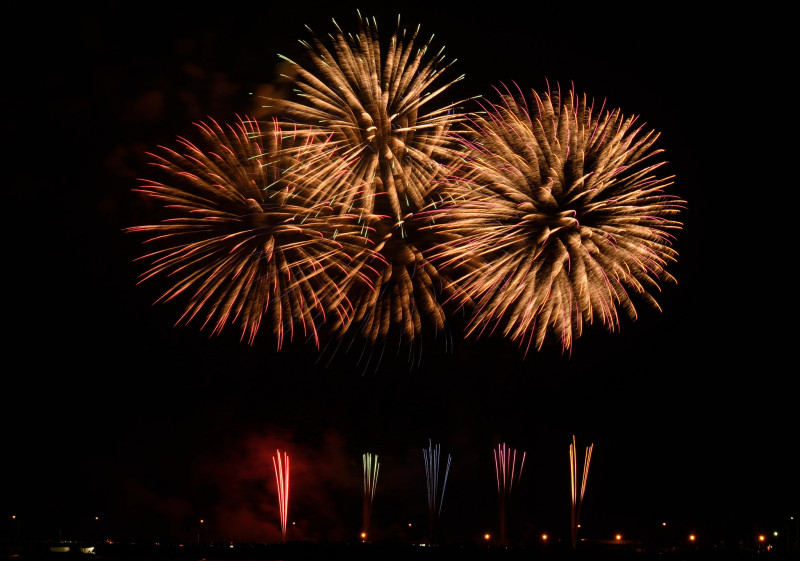 There are many interesting festivals that take place on Enoshima every year. One of them is Tanno festival, during which a mikoshi (portable shrine) is carried between Yasaka Shrine and Koguri Shrine. When it passes near the water, the ones carrying the mikoshi enter the ocean waters with it. On the way, The mikoshi from Yasaka Shrine meets another mikoshi from Koguri shrine and they parade together. The whole event is very lively and worth watching. Another attractive event is the firework festival held every autumn. More than 3000 fireworks color the skies over the island, creating an eerie sight. 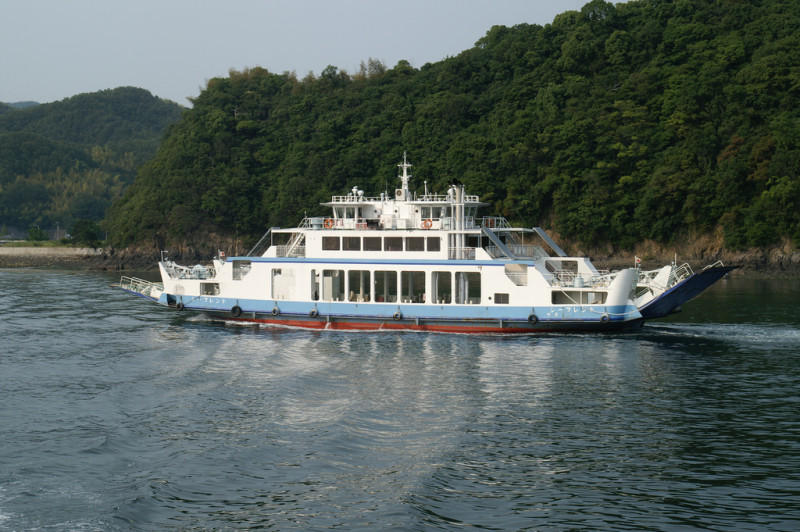 A ferry started operating on Enoshima in the recent years. The ferry connects the mainland to the rocky beach on the island’s south, that otherwise is only accessible by climbing the steep hill. The ride lasts 5 minutes, but the views are beautiful. This way of approaching the island is especially recommended to those who do not have much time on their hands but still want to visit most of the island. 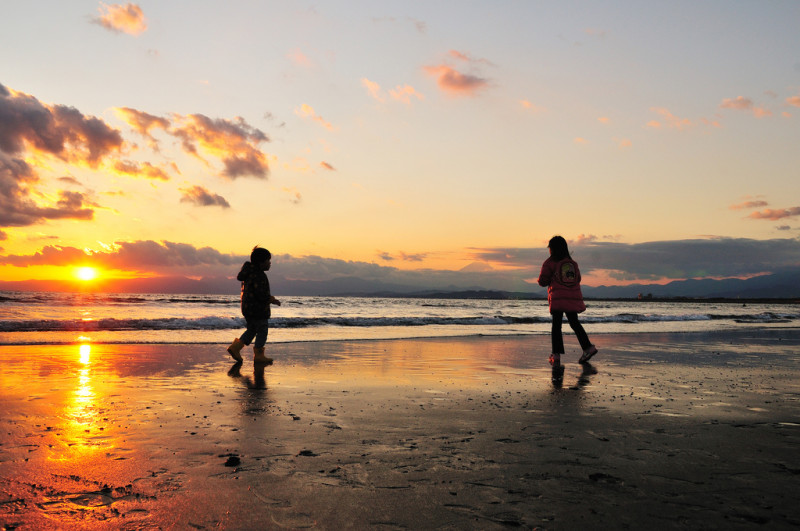 The Shonan Beach stretches at the left and right of the Enoshima bridge and attracts many people for swimming, sunbathing or enjoying various water sports. But even if you are not visiting in summer, a stroll on the beach is still a pleasant activity. If you are in the mood for a walk, you can go along the beach all over to Kamakura or even further, to Zushi city. There is a very attractive little park called Zushi Marina where you can relax among palm trees. 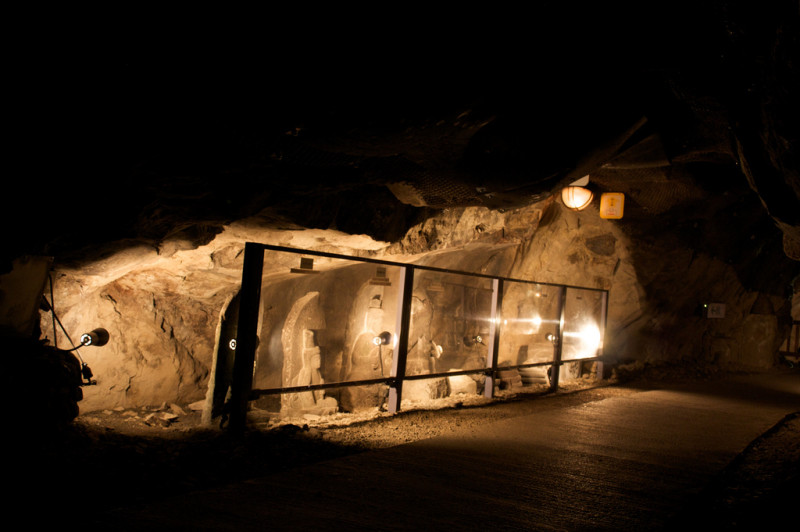 The Iwaya Caves were formed after thousands of years of earthquakes and erosion by the ocean waters. The caves were developed and turned into a tourist spot. There are handrails, panels with explanations, lights and various models for decoration. The most interesting part of the caves is the furthermost spot that is said to connect directly to the Narusawa ice cave located near Mt. Fuji. There is an icy wind howling through the cave that gives off a mystical vibe. 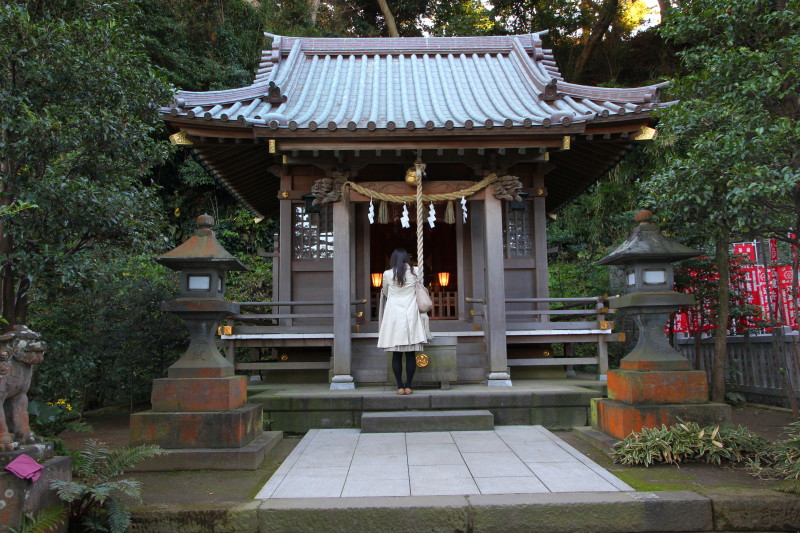 The Enoshima shrine is a complex of three sub shrines: Hetsunomiya, Nakatsunomiya and Okutsunomiya. It is said that that they originate from an old shrine that was located in the Iwaya caves around year 552. The shrine is best known for its naked statue of Benzaiten, a Shinto god that is rarely seen this way. Visitors can write wishes on ema plaques (wooden prayer plaques) and hang them next to other people’s ema. 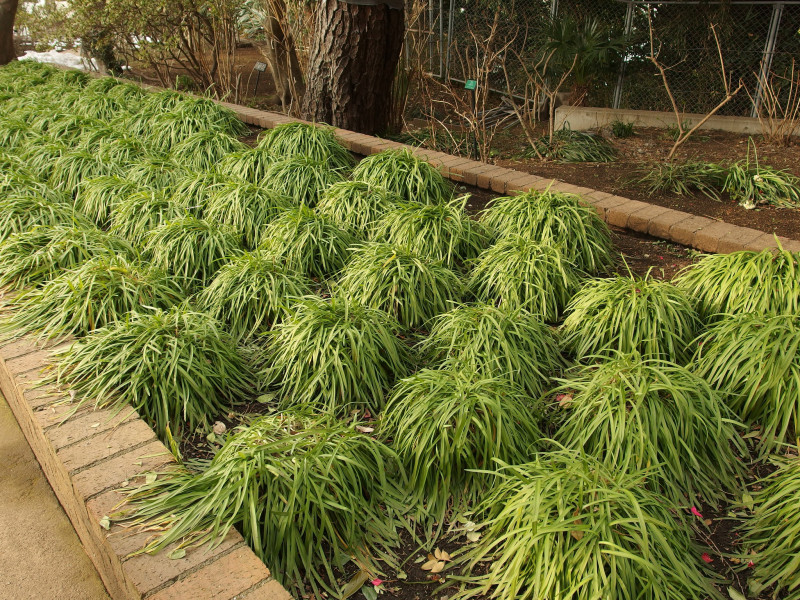 The Samuel Cocking Garden is a small botanical garden on top of Enoshima Island. The garden was created by British merchant Samuel Cocking as a place to collect tropical plants. He also built a greenhouse where he nurtured various kinds of flowers, but it was unfortunately destroyed in the Great Kanto earthquake. The garden today features many western and Japanese plants and flowers, making it the perfect place for a relaxing afternoon. 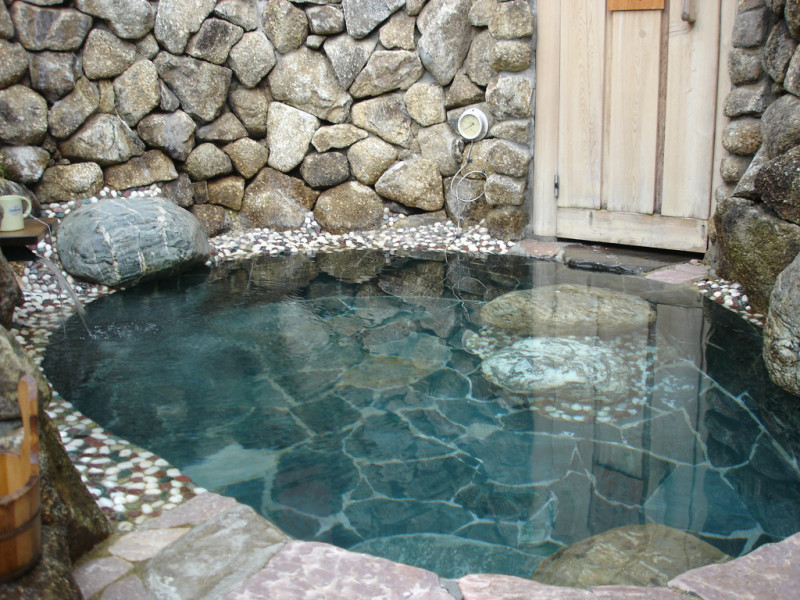 The place where you can enter hot springs on the island is Enoshima Island Spa. The facility features mineral-rich hot spring water, carbonated bubble baths, Aufguss herbal sauna treatments, aromatherapy massages, and shiatsu foot massages. The waters are very beneficial to the human body and guests can also enjoy views of the ocean and Mount Fuji from the baths.

14. Go up the lighthouse 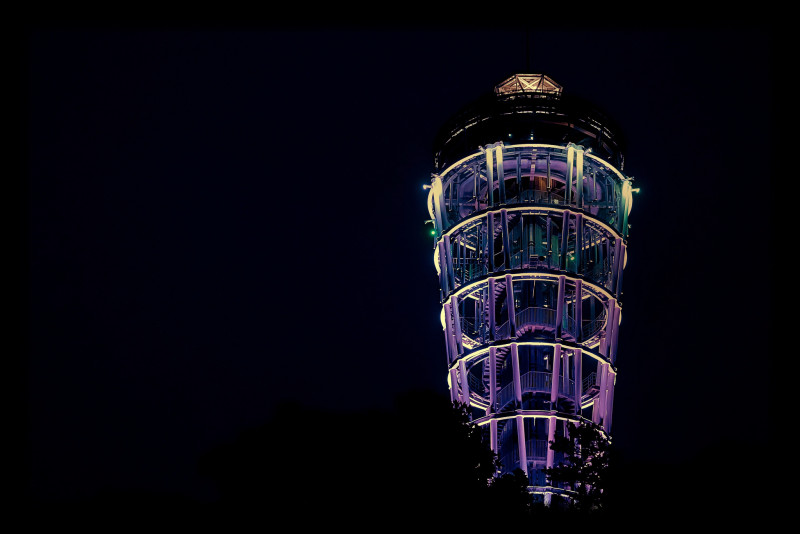 The lighthouse in Enoshima was finished in 2003 and was built as a celebration of Enoshima Electric Railway’s anniversary. The lighthouse is completely covered in glass windows and has a specific candle shape, which gave it the “Enoshima Sea Candle” nickname. The top can be reached by elevator or by climbing the circular stairs. The top is at 119.6m above sea level and offers amazing panoramic views of the surroundings, including Mount Fuji on days with good weather. 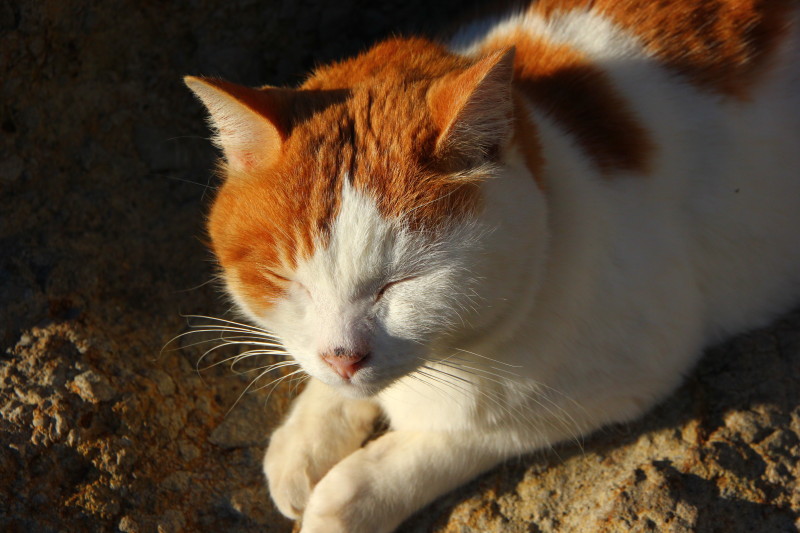 Enoshima has a large number of cats which are used to humans, It is said that at first a few cats were brought to the island to limit the population of cats on the mainland. They reproduced since and thousands of cats now fill the island, to the delight of the visitors. You can see them everywhere – stretching in the sun, sleeping next to the temple or patiently waiting next to fishermen on the shore to receive a bit of their next catch.

10 Restaurants You Must Go in Hakone