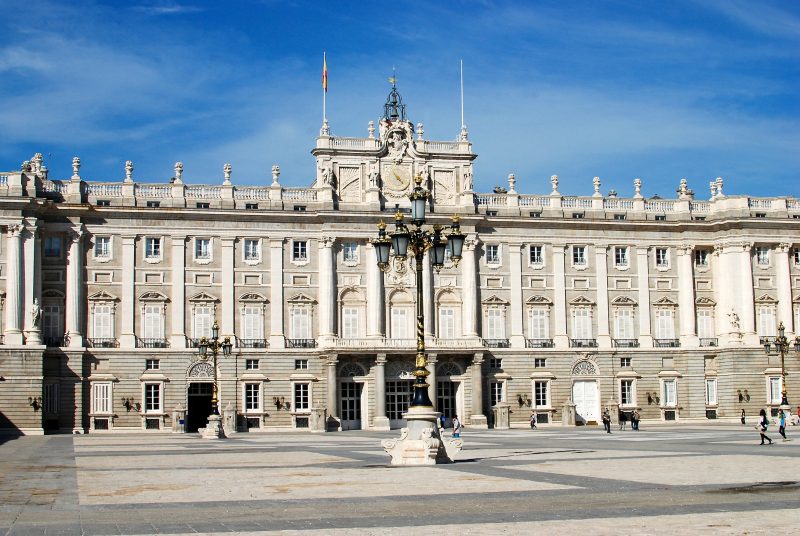 While in Madrid take time to stroll the Royal Palace of Madrid and absorb its beauty and exquisite artistic features, all in a grand atmosphere of history. The Royal Family do not actually reside here in the palace, using it only for state ceremonies. 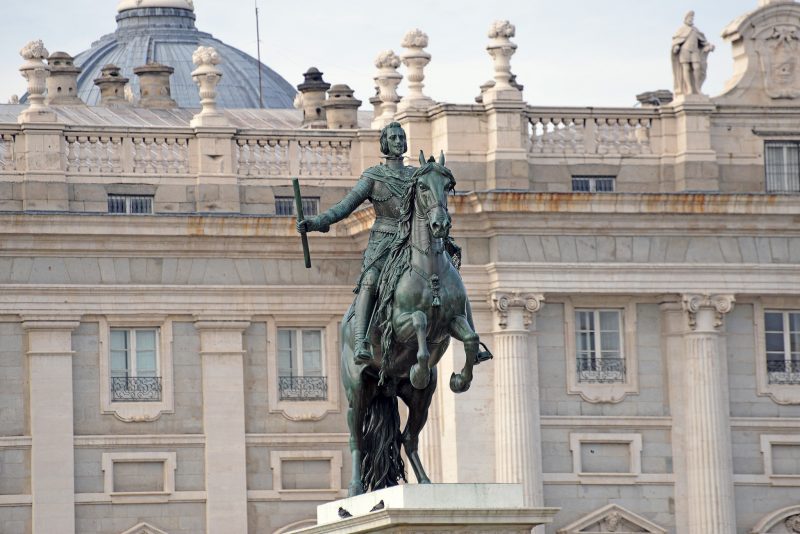 The Palacio Real De Madrid (Royal Palace of Madrid) has its origins in the 9th century when it was the site of an old Alcazar (castle) from the Moorish Kingdom, which in turn was burned to the ground in 1734.  King Felipe V then decided to build a new palace on the same original site. 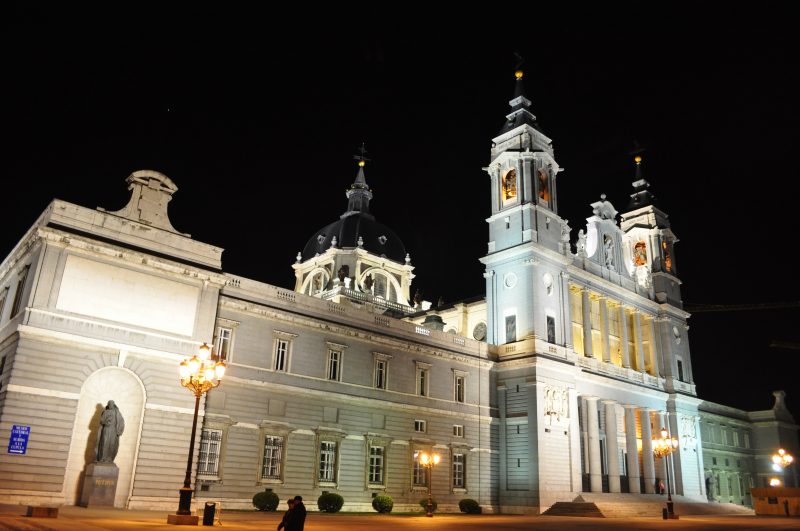 Filippo Juvara was chosen to create the new palace inspired by design plans from the Palace of Versailles in France. After the fire that had previously caused such destruction, the decision was to build the new palace from stone and brick. It is designed around a large square interior courtyard and also has another courtyar (Plaza de Armas) which is the main entrance to the palace. From this courtyard you can see the Almudena Cathedral facing the palace across the square.

Inside the palace are incredible works of art from important Spanish artists of the moment including masterpieces by Caravaggio, Velazquez, Francisco de Goya and stunning frescoes by Giaquinto Tiepolo and Mengs. The materials inside include stucco and Spanish marble as well as mahogany. Much of the artistic style of the Palace has evolved over the years in keeping with the styles as they change with rooms that are unique and elaborately decorated. 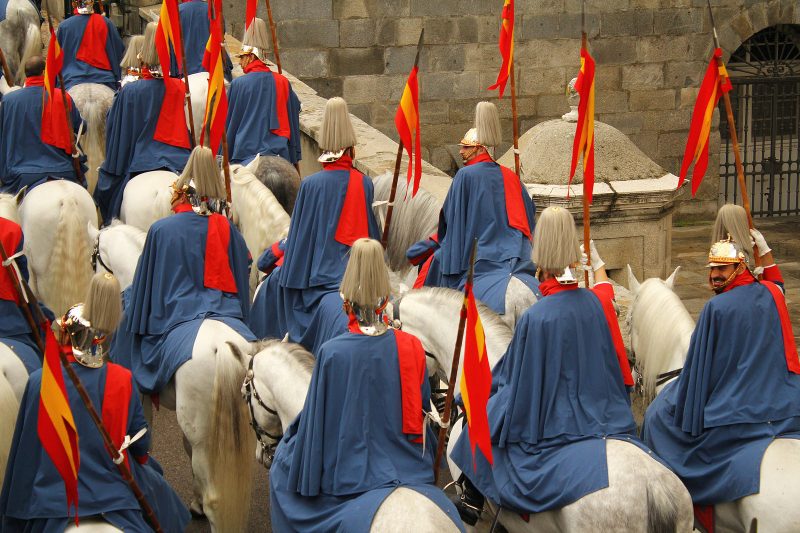 Considered one of the best in the world, the royal armory inside the Madrid Royal Palace consists of pieces from the 13th century onward. Works of note include the full armor and weapons used by Emperor Charles V in the battle of Muhlberg as well as pieces of tournament made for Philip II. Sadly some of the armor was lost during the Spanish Civil War, however, the pieces still to be found in the palace are some of the most important existing in Europe and indeed the world. 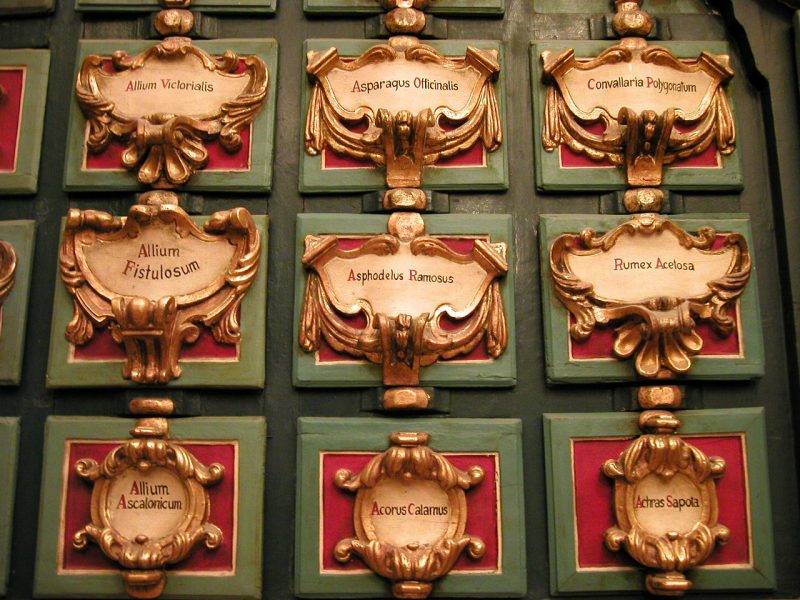 The palace is also home to the Royal Pharmacy, an interesting section to visit for its where you can find cabinets, containers and bottles for storing medicinal herbs and even prescriptions dispensed to the Royal Family. The collection of jar and containers include those made by La Granja de San Ildefonso.

This is an impressive room with an incredible collection. The book shelves date from the period of Charles III, Isabel II and Alfonso XII. The collection includes maps, stored in the library which cover the Spanish Empire and its kingdoms. The Royal Archives include a bible of Dona Maria de Molina and the Book of hours of Isabel I of Castile. It’s clear to see the times moving with the way the books have been bound differently through the ages. Some include Rococo in gold, some are Neoclassical and other show Gothic motifs.

The Campo del Moro Gardens get their name from Muslim leader Ali ben Yusuf who allegedly camped with his troops in the gardens while an attempted reconquest of Madrid was taking place. It was King Felipe IV who had fountains built and planted various shrubs and flowers but it wasn’t until the reign of Isabel II that the gardens were really given attention and were designed in the Romanticist style.

The Sabatini Gardens were named after Francesco Sabatini who had designed the Royal stables that previously occupied the site. The actual designer of the Sabatini Gardens was Fernando Garcia Mercadal. They are to be found adjoining the north side of the Royal Palace and feature a pond surrounded by four fountains and statues of Spanish Kings. These gardens are a pleasant leafy spot to relax during your visit to the palace. In summer events and concerts take place here. 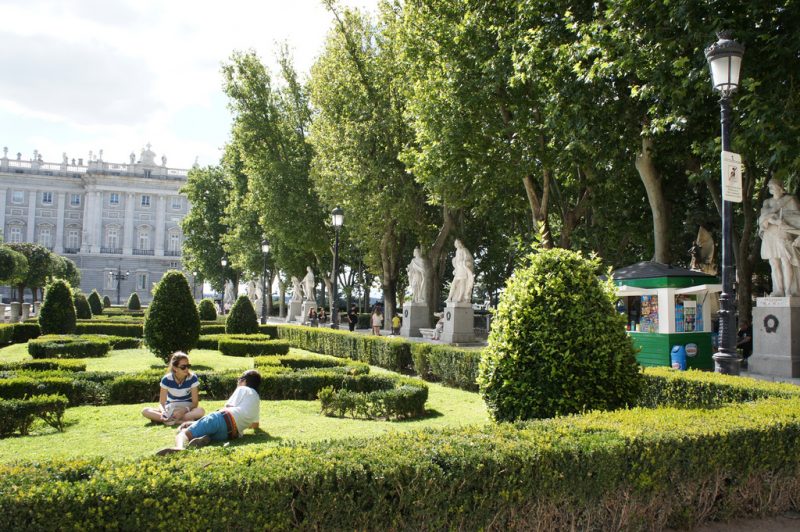 Located of course on the west side of the Palace, this plaza (or large square) is more of a park connecting the Royal Palace to the Royal Theater. It’s divided into three main sections, the Central Gardens, the Cabo Noval Gardens and the Lepanto Gardens. A row of statues, known as the Gothic Kings, carved from limestone mark the boundaries of the Central Gardens, in the center of which is a monument to Philip IV.

Here’s all the information you will need to plan a visit to the Royal Palace at any time of year.

15 Nightlife Scenes to Enjoy in Madrid

15 Things to Know About the Madrid Metro