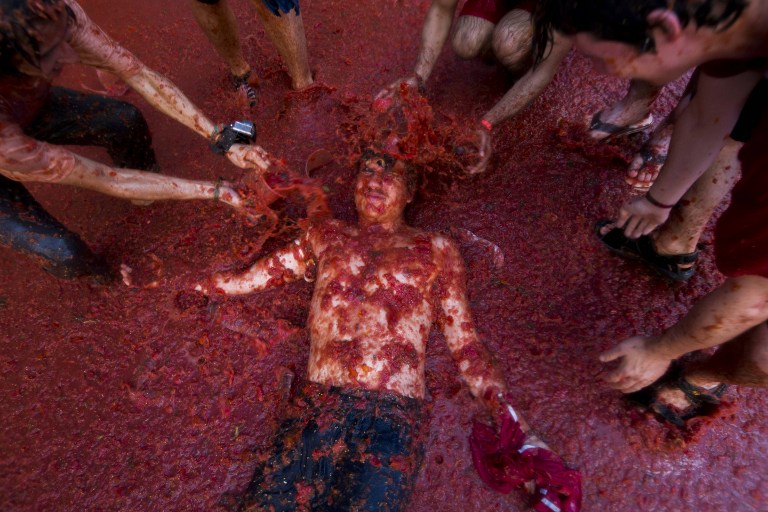 Festivals are very famous in Spain. Cities and streets will be so colorful and lively, everyone is celebrating and happy. So if you want to visit Spain during its festive days. Here are the best festivals for you to attend.

It is one of the craziest festivals in Spain. It happens once a year at the end of August at Bunol in Valencia. This festival is full of tomatoes. Everyone will be partying and drinking at the place, throwing tomatoes everywhere. It would be great if you wear white during this festival  so that the tomato juices will be visible. Sounds like a lot of fun!

This is a mix of a carnival and anarchy that happens once a year in Ibi in Alicante every 28th of December. It started 200 years ago as a way of celebrating the Day of Innocents. On this day, some people would dress up in a mock military uniform and make speeches against businessmen and politicians as they walk through the streets and then they will have fun with a battle of eggs, flour, and some firecrackers.

This festival happens in Paloma every July 6 to 14, once a year. This festival is a magnet for thrill seekers and spectators. There will be thousands of Spanish people and international visitors at the area. You should wear white shirts and red bandanas if you want to join in. People then will line up to engage mad dash against bulls walking on the streets and at night fairly lights are all over the streets. People would be drinking, eating and dancing. There are also fireworks and bands.

This festival happens once a year, in the middle of March at Valencia City. It is the biggest fiesta in Valencia that lasts four days. There would be a lot of figurines, performance, fireworks at the streets during the four days of fun and the highlight would be the huge bonfires at night.

This festival happens around June 20-24 at Valencia Region. This is a simple festival that does not involve any colorful costumes just a pagan celebration of the summer equinox. It is a one night where the locals are allowed to light bonfires on the beach and then they will have barbeque and drink. The real party begins when people will start splashing water everywhere, to anyone. You can’t get mad because it is a part of their tradition, all you have to do is take your turn into splashing water everywhere.

It is a festival that happens during January 5 to 6, throughout Spain. The biggest processions will be in the major cities of Spain. They will even throw confectionary at the streets for the children. It is a day of annual gift giving in which is already a tradition in Spain. Children are bought presents by their parents telling them that it was the Three Kings presents that visited them while they are asleep, just like Santa.

This festival happens once a year around February 4 to 10 at Catalonia. It is a huge gay event with wild partying. This festival is launched by Jueves Cardero. There are massive drag queen shows with a feast of local dishes as well. There are two main parades which will happen during a Sunday and Tuesday within the said dates at 7:30pm. If you plan to witness the festival, and you don’t want to stay overnight in the area, there will be extra night buses and trains for the event that can get you back to Barcelona.

This festival happens on the 23rd of April in Barcelona. It is a festival dedicated to Saint George or Sant Jordi, the patron saint of Catalonia. It is also the city’s version of Valentines Day, where the romance is just everywhere. There is a tradition that a man must give a rose to his woman in exchange of a book on this day. The balconies all over the streets will be full of red and yellow flag as well.

This is a festival that happens around the month of June in Haro, La Rioja region of Spain. It is a pretty amazing festival in which a lot of people will be gathered in churches to attend the 9:00 mass and after the mass, there will be a huge wild wine fighting jury. For heavy drinkers, you might want to join the battle. Who knows, you might win?

This festival is a long festival that happens for 8 days, every 8th of August in the streets of Gracia near Barcelona. There would be thousands of people attending this festival and sometimes it would reach even millions. There would be free outdoor concerts and various family activities. The streets will be covered with colorful decorations as well.

What are you waiting for? Choose the best festival you would want to attend and plan that trip right away! or better yet, choose all of them.