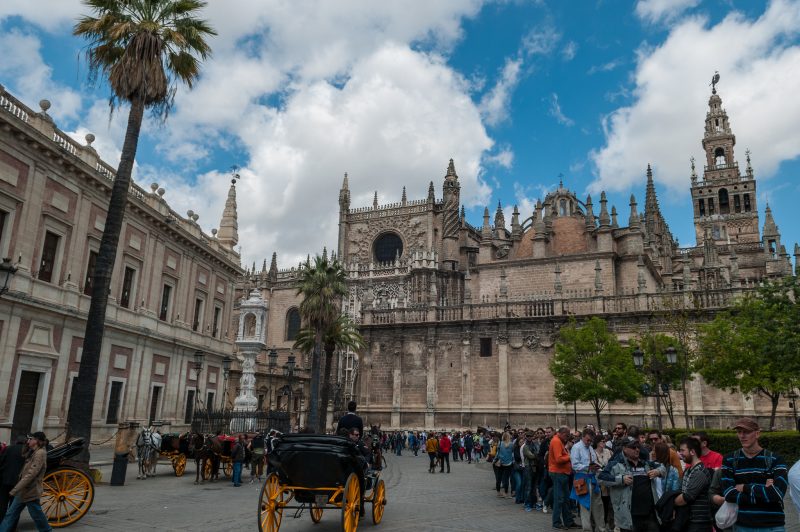 One of the grandest and most majestic Roman Catholic cathedrals in Europe is the Seville Cathedral in Andalusia, Spain. It possesses the largest altarpiece in the world. It is also recognized as a UNESCO World Heritage Site in 1987. The gothic details of the cathedral capture the eyes of the visitors.

The Cathedral was built to showcase Seville’s power and wealth. During the planning phase, church leaders have made a statement, “Let us build a church so beautiful and magnificent so that those who see it built will think we are mad”. Overall, the Cathedral’s construction lasted over a century from 1401-1506.

The total area of the Cathedral is at 11,520 square meters. The building is 135 meters long and 100 meters wide, and a ceiling height of 42 meters. It is one of the world’s largest cathedral. There have been debates claiming it is ranked only as the third largest church in the world.

The crowning glory of the Seville Cathedral is the tall Giralda Bell Tower. The tower stands at 104.5 meters. The construction began in 1184 and finished in 1198. Despite earthquakes during the 14th century, the tower remained firm, with minor damages only. The belfry was added in the 16th century.

General ticket price is at 9 euros for entrance to the Cathedral and the Giralda Tower. A reduced price is given to pensioners and students under 25 years of age. Free entrance is given to Seville residents, persons with disabilities, children under 14 years of age, and officially unemployed people.

One of the main attractions in the Cathedral is the tomb of the famous explorer Christopher Columbus. His body was brought from Havana to Seville in 1890. The tomb has four large statues of the bearers representing the kingdom of Aragon,Castile, Leon, and Navarra. Doubts about the authenticity of the remains of Columbus have been an issue for a long time.

There are various agencies offering guided tours at the Cathedral and the Giralda. Plan your tour completely and book your tickets ahead online to save time. Enjoy exciting historical stories from your guide. The tour lasts for 2 hours. Be prepared to be amazed at the extraordinary interiors, Spanish paintings, stained-glass windows, marvelous ceilings, and the dazzling altarpiece.

The most stunning part of the interior is the Retablo Mayor (main altarpiece). This is an ultimate masterpiece of Flemish craftsman, Pierre Dancart. He single-handedly carved 45 scenes of the life of Christ. He started doing this in 1482. Within 44 years of hard work and creativity, he completed the altarpiece in 1564.

Overall, the Cathedral has 15 doors, with 4 major facades. In the west facade, there are 3 doors: Door of Baptism, Assumption, and Nativity. The Door of Saint Christopher lies in the south facade. The north facade has 4 doors: Door of the Conception, the Lizard, the Sanctuary, and Forgiveness. The east facade presents the Door of Sticks and Door of the Bells.

The Cathedral, due to its huge size, houses 80 chapels. There are around 500 masses heard daily. The Chapel of Saint Anthony keeps the painting of The Vision of Saint Anthony by Bartolome Murillo. Each chapel is elegantly designed. Tour around the chapels and witness the marvelous work of art in the interiors.

7 Accomodations to Stay in Sevilla

15 Accommodations to Stay in Seville

10 Things to Know about Seville Airport