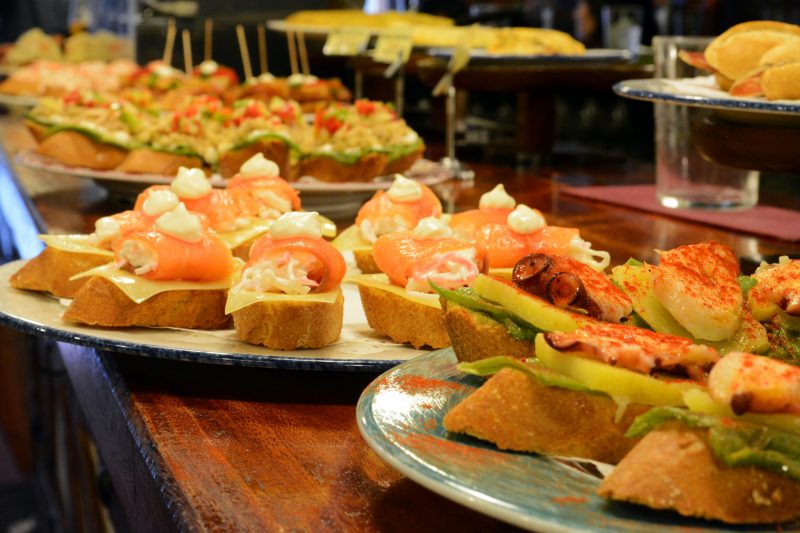 When saying about Spanish food, people often remember excellent seafood, different types of tapas, and typical roasts. If you’re traveling this country, the best thing you should try is several kinds of the traditional food. Here is a list of favorite local food you always can find in Spain. 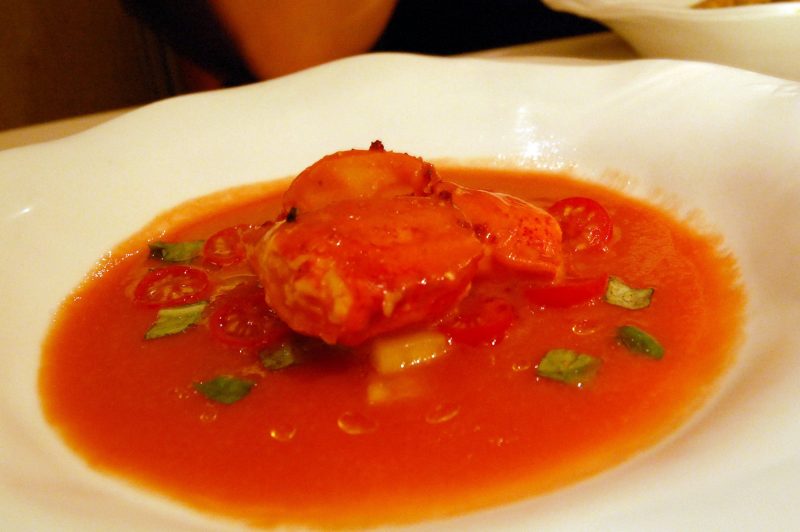 Gazpacho is a refreshing soup including the ripest, reddest tomatoes, olive oil, bread, peppers, and cucumber. All ingredients are blended until totally smooth, and then the mixture will be cooled and pour in a small cup to serve. It’s a popular soup in the summer, and you always can find it serving beside the tapas. 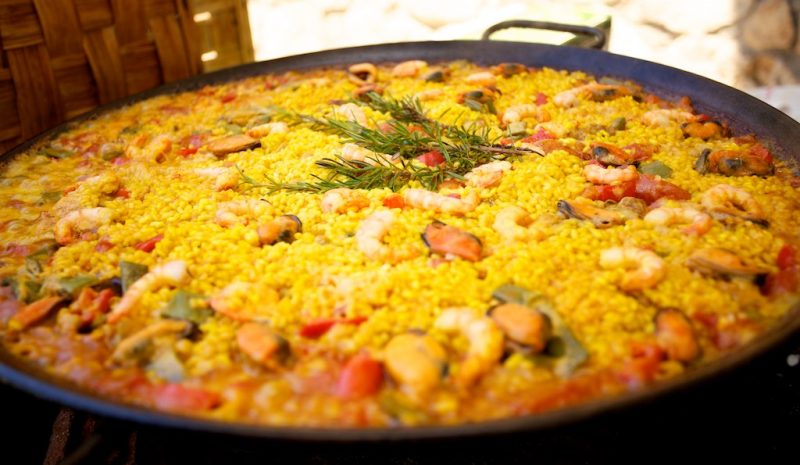 Paella is the best outstanding, favorite food of Valencia. The traditional type of Paella includes rabbit or chicken, butter beans, runner beans, and the most important ingredient is rice original from the north of Spain. This kind of rice can mix all the tastes and supports the best flavor of Paella. 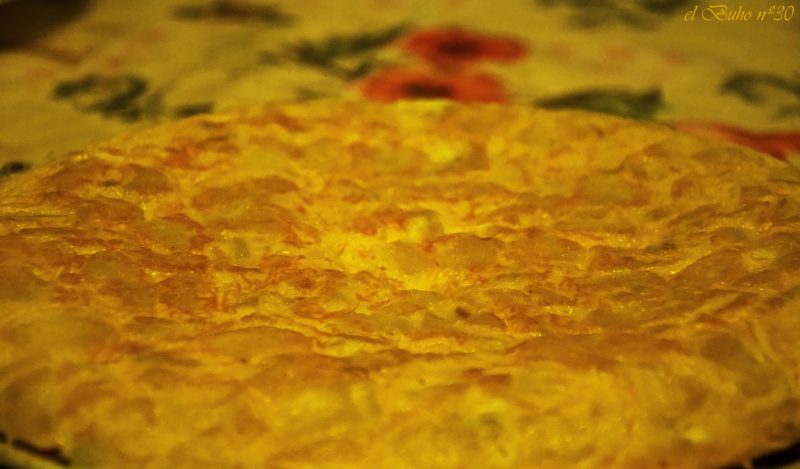 Tortilla Española is a Spanish omelet including eggs, potatoes, and onions. Some people don’t use onion and consider it as a crime of the dish. Types of Spanish omelet can have other ingredients such as chorizo, ham, courgettes, spinach or anything you want for your meal.

You’re stepping into a tapas bar; you may see an earthenware dish of hot prawns. Certainly, this food will attract your nostrils, and you just want order it as soon as possible. The ingredients are prawns, green chili, olive oil, garlic and some parsley.

Tostas de tomate y jamón is a local food of the west region of Spain. The ingredients are bread, garlic, tomatoes, olive oil, and some slices of Jamon. You can try this dish for lunch as a quick, delicious meal.

Patatas Bravas is a Spanish fried chip, changed with several ways of cooking across the country. In Madrid, the brava sauce has a sweet, spicy flavor made from the olive oil, stock, and flour without tomatoes. Some other local people add garlic or fino sherry.

Any Spaniard believes that grandmother’s garlic chicken is the best Pollo al ajillo. Garlic is fried with olive oil; then it’s taken out and mixed with chicken, rosemary, dry sherry, thyme or white wine. The food doesn’t have the fixed recipe but becomes different following by the wanted flavor. 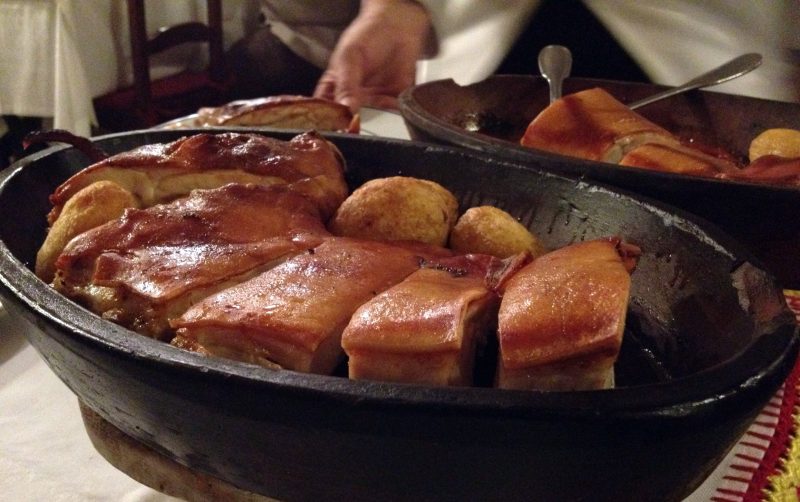 Cochinillo Asado is cooked with roast suckling lamb or pig. The meat is made in a huge wood-fired oven and cut on a side of an earthenware plate. It’s best to enjoy the food between beautiful old buildings and nature.

Pisto is the typical food of neighbors in the southern countryside of Madrid, but it has several appearances in some other regions of the country. The ingredients are onions, courgettes, garlic, tomatoes, peppers, and olive oil. It’s served as the starter with chorizo or fried eggs. 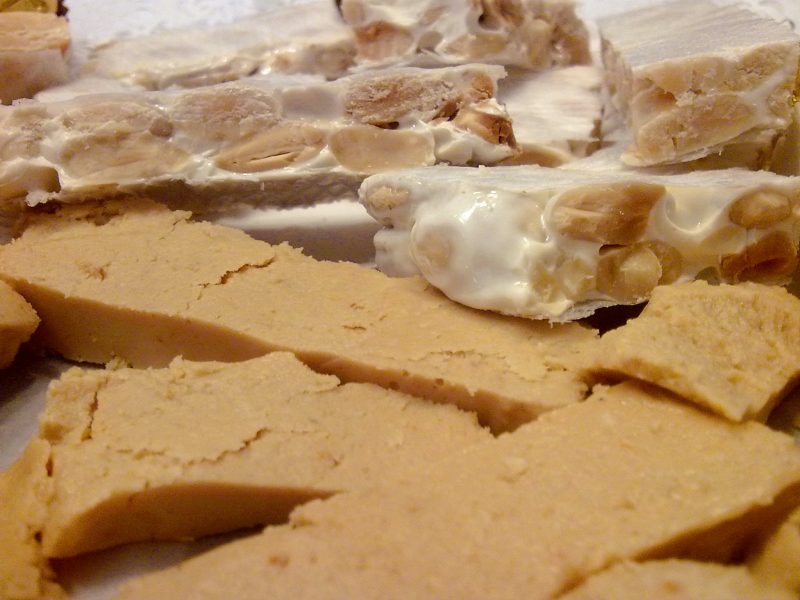 Although Turron is a favorite choice during the year, Spaniards have the massive amount of Turron in Christmas season. Most of it comes from the small town of Jijona in Alicante province. The food includes the local almonds mixing with egg white and honey. There are two kinds of Turron, one is a smooth taste, known as Jijona, and another is a sharp taste with pieces of almonds inside. 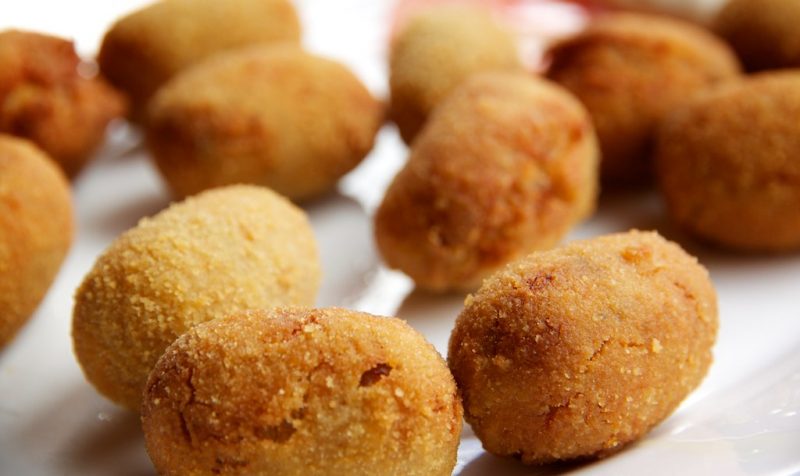 Croquettes are served in most of restaurants and bars with their unique recipe in Spain. It’s a reasonable idea that you make a comparison of the dish to range the quality of restaurants. There are flavors of it, the best one is often served in the traditional bars, some other types are smooth or sweet taste. Some places add jamon or black sausage into the mixture for the strong flavor.

Jamon is one of the best dry-cured ham in the world. Today, Spanish producers still make jamon following hundred-old techniques. There are two famous jamon in Spain, Jamon Iberico, and Serrano, but you can also find numerous kinds of Jamon around the country. 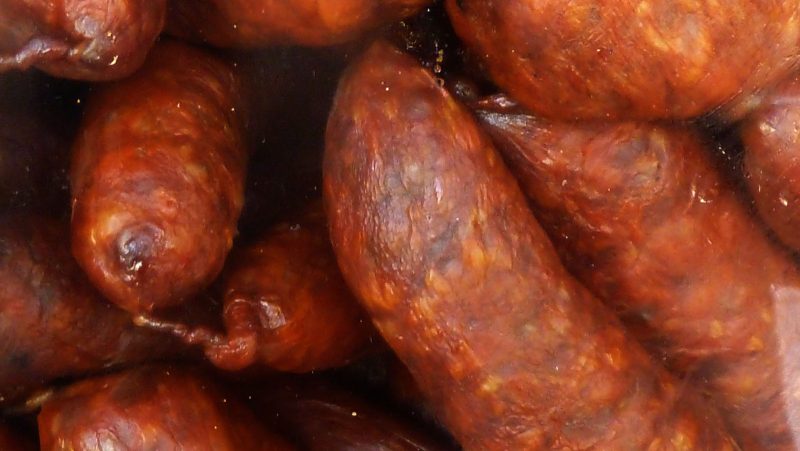 Chorizos are the most versatile food of Spain. It can be cured, preserved, or smoked with a mixture of pork sausage, garlic and smoked local paprika. It has two flavors, spicy or sweet, and you can eat raw chorizos as a tapas or eat with several dishes.

Salchichon is a summer sausage of Spain, produced by cooking, drying, smoking and some other ways. The meat can be pork, horse, veal or ox, mixed with salt, nutmeg, pepper, oregano, and garlic. You can eat the raw dish with bread for breakfast. 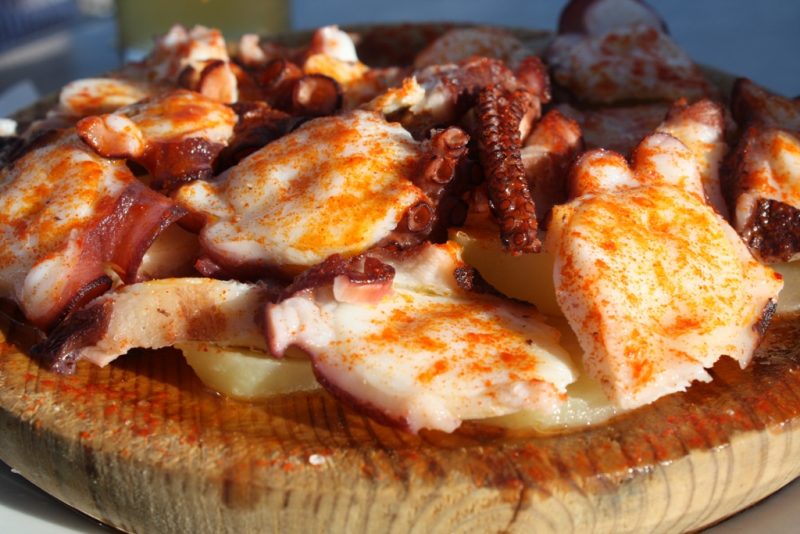 Pulpo a la gallega is a standard Galician dish you can find in many Galician restaurants around Spain. Octopus is mixed with paprika, olive oil, and crusty rock salt. You can eat the meal with one or two potatoes on a wooden platter. 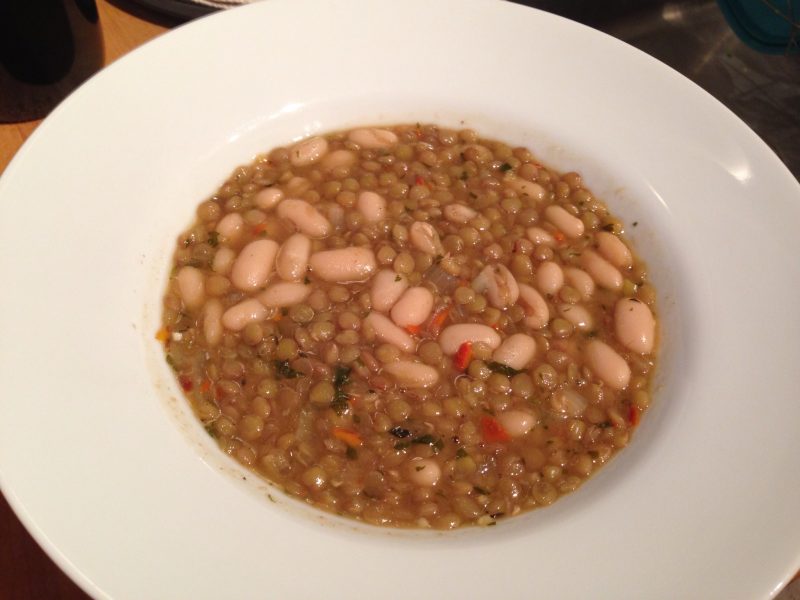 Spain is a country famous for a variety of beans such as the dried large white beans of La Granja. You can find different bean stews around the country. It has some other names like fabada, a bean stew mixing with meat including chorizo, black sausage and more. The dish is often served in winter with cabbage, sausage, and chic peas.

Fried Milk has a Spanish name ‘leche frita’ that you may be hard to find it on the menu of restaurants. It’s a traditional Spanish food with the fresh taste. The ingredients are milk, flour, eggs, sugar, and cinnamon. You can find easier other versions of fried milk than the typical Spanish dish.

Spaniards often have a drink in and outside the main meals, such as coffee, wine, or beer. Two local drinks of Spain are Tinto de verano (red sangria or summer wine) and rebujito (white sangria). Some people mix them with soft drinks and create a surprisingly fresh taste. Red sangria includes red wine and lemon soda, while white sangria includes white wine and lemon juice with a fresh mint on the top of a cup. 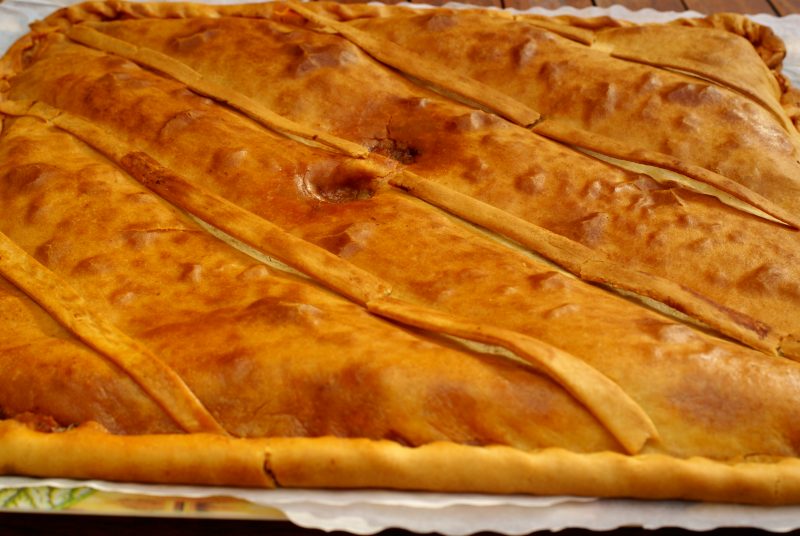 Empanada Gallega is made as its name “to wrap in bread”. The inside mixture is pork, chorizo, tuna, peppers, sardines, some types of seafood and vegetable. The sauces adding the dish are onion sauce with or without tomatoes. 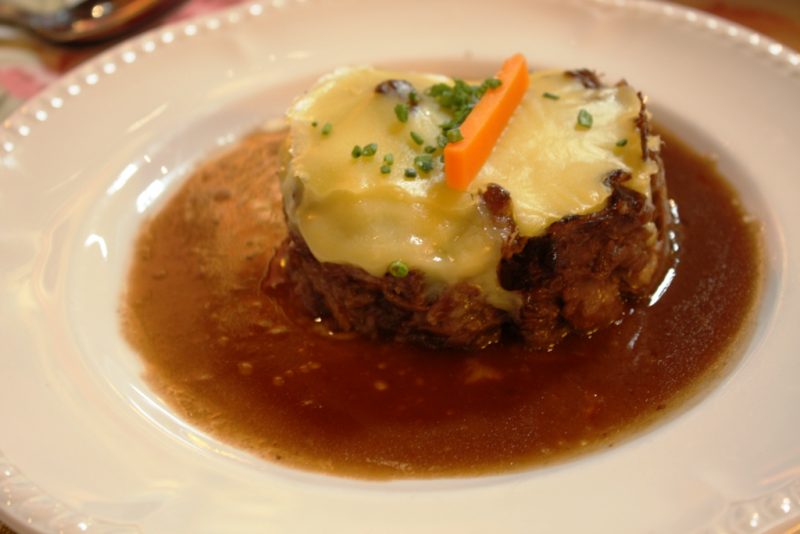 Rabo de Toro is a famous food you can easily find in many restaurants around Spain, but the Valencians can cook the best rice. This dish includes traditional ingredients such as white rice, cuttlefish or squid, olive oil, seafood broth, onion, paprika, squid ink and other secret ingredients of the restaurant.

7 Accomodations to Stay in Canary Islands

15 Things To Do in Tossa de Mar