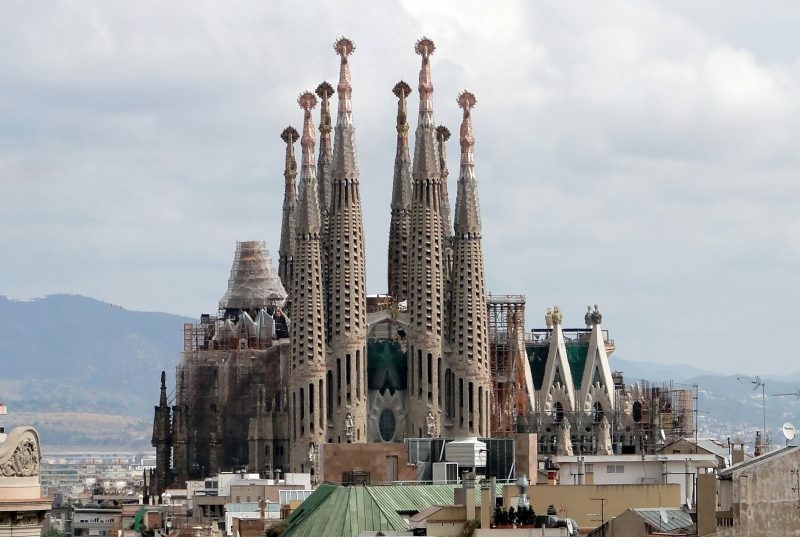 A visit to Barcelona, the capital of Catalonia province in Spain can never be complete without a trip to the most popular monument in Spain- Sagrada Familia. The Roman Catholic church is packed with the most amazing features each one contributing to the building becoming a ‘must-visit’ place. Want to know why the church is worth a visit from your side? The points below shall answer this query of yours.

1. Its a Huge Building 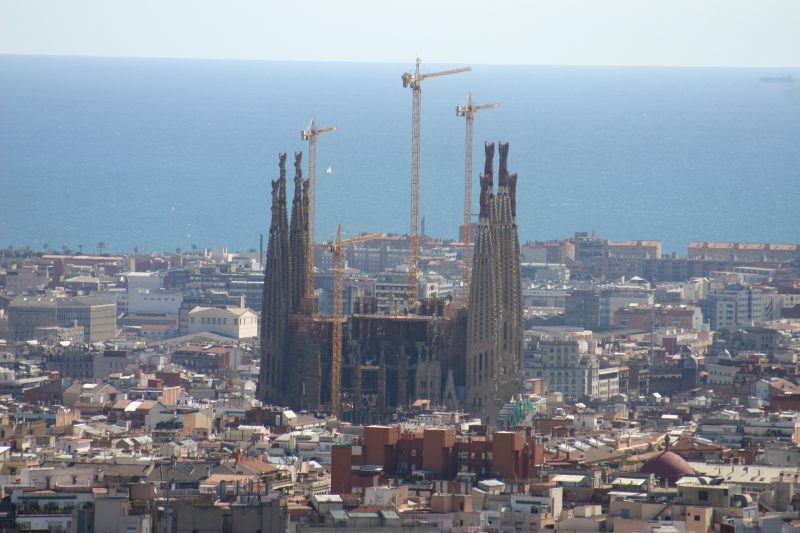 Source: Year of the dragon

Yeah, it is a very big structure. It has not been completed yet, but it is taller (by a very large margin) than any of the buildings that surround it. Its tallest Spire, according to the actual design, was supposed to be 170 meters high while the others were supposed to have a height of around a hundred meters.

2. The Number of Visitors is Very High 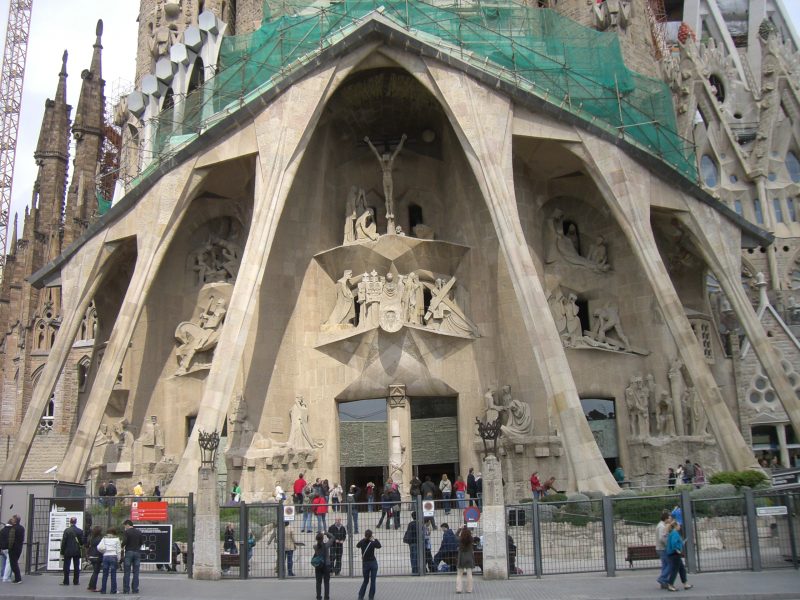 Statistics reveal that approximately 2.8 million people go to Sagrada Familia every year. This implies that this church is visited by more people than any other monument or structure in the country. If such a large number of people are going to see it (and the number keeps getting larger), the place must have something in it for the viewers!

Anyone who has visited Barcelona knows Antoni Gaudi. His works are some of the most amazing pieces of architecture ever created by man. Now, Sagrada Familia is also one of Gaudi’s works. In fact, it is said that he was obsessed with the creation of this building. This means that the building must have some unique architectural beauty.

4. It has been Consecrated

As Sagrada Familia is a church, there are religious reasons for visiting it too. Yes, for those who do not know, it was consecrated by none other than Pope Benedict XVI on November 2010. This means that it was certified as a sacred place by the pope of the time in the presence of a huge crowd during a ceremony.

5. It is an Example of Great Architecture

Even for someone who is not quite into architecture, the intricacy and details of the Sagradia Familia are thoroughly admirable. Every bit of the church is an example of great architectural beauty. The spires, portals, aisles and chapels are all great features of the church each having its own remarkable attractiveness.

6. It is different from other Churches 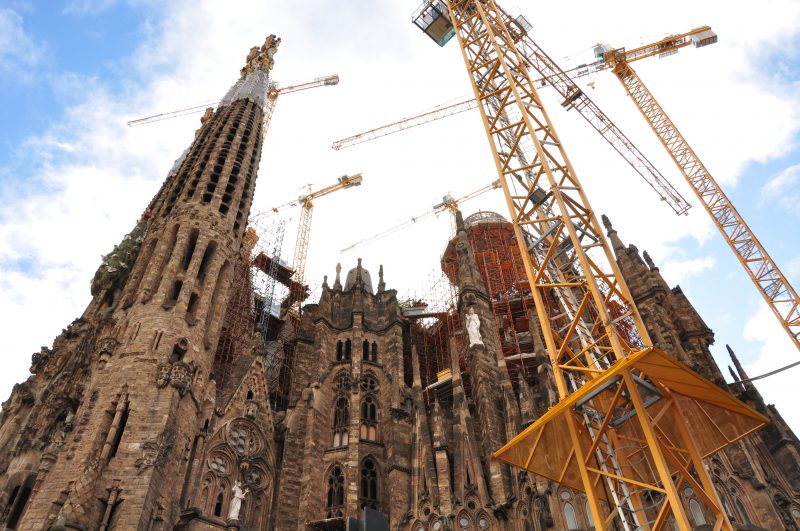 Sagrada Familia is not like the usual churches you may have seen around the world. Gaudi deliberately deviated from the conventional church type architecture and design while making its plans. For instance, the church was never supposed to be a cathedral, but it has the size of a cathedral. Similarly, it has many other features which are uncommon in churches.

7. Its Full of Gaudi’s Innovations

Despite the era he lived in, Gaudi had a tendency to be innovative with his buildings. This is why the Sagrada Familia is full of unique things. It is a welcoming place with a festive touch on everything it encompasses. Rarely does one see a building which is more warmly inviting than the Sagrada Familia.

8. It has Awesome Spires

Sagrada Familia, upon its completion, is supposed to have a total of eighteen spires. The building looks so amazing with only eight of them at present. Just imagine how cool it would look after its completion! Anyway, at present, the eight spires are an amazing sight. If you would raise your head to look at their tops, you might even fall backwards!

9. The Details present on the Building

The details, such as carvings on the external part of the Sagrada Familia are a great sight for anyone who visits the building. You may not be able to feast your eyes on the details present on the top of spires, but the one which can be seen easily are quite fantastic too.

10. The Philosophy Incorporated in its Structure is Remarkable

Sagrada Familia was not just constructed in a haphazard way. Antoni Gaudi had been thinking very deeply while designing it. For instance, he designed 18 spires as each one represented the 12 apostles, 4 Evangelists, Virgin Mary and Jesus Christ himself. The tallest one was supposed to be Christ and the rest were allocated in according to heights too.

11. The Impression made by the Nativity Facade

Of all three facades of the church, the Nativity Façade was completed first. In it are embedded many features of nature which represent and celebrate life. This because this façade was devoted to the birth of Jesus. The façade is a great sight, as well as an accurate representation of Gaudi’s skill and passion for architecture. 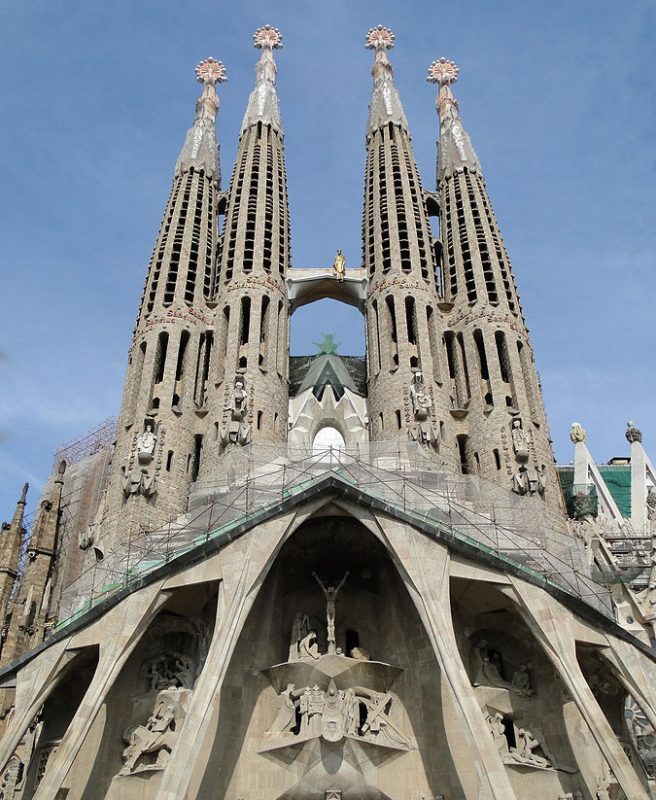 As compared to the ‘festive’ Nativity Façade, the Passion Façade is quite dull. It consists mainly of bare stones and those which are carved contain only lines which resemble bones. It has been dedicated to the crucifixion of Christ and his pain at that moment and therefore, has been designed accordingly.

13. The Awesomeness of the Interior 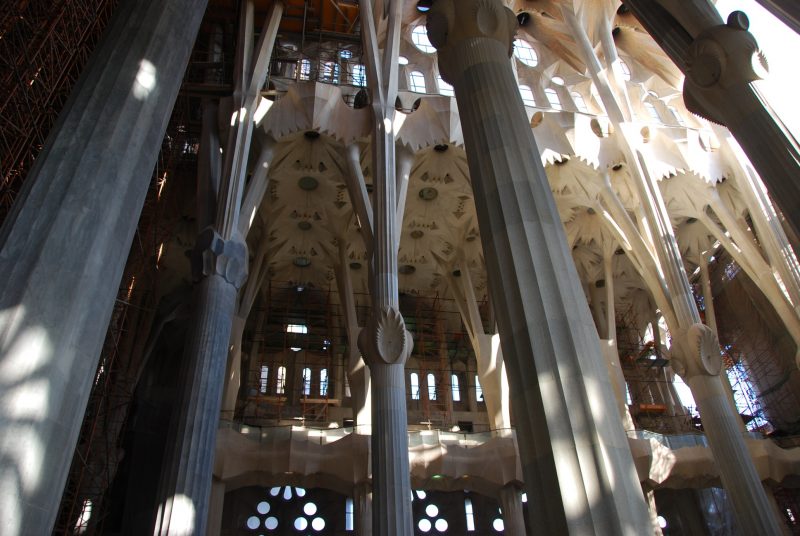 The interior of the church is as intricate and wonderful as the exterior. It is shaped as a Latin cross and consists of five aisles. Gaudi’s remarkable abilities are depicted in the pillars too. They are branched so as to divide their load and have a variation of shapes along their length. For instance, there are transitions from a square to an octagon and so on. 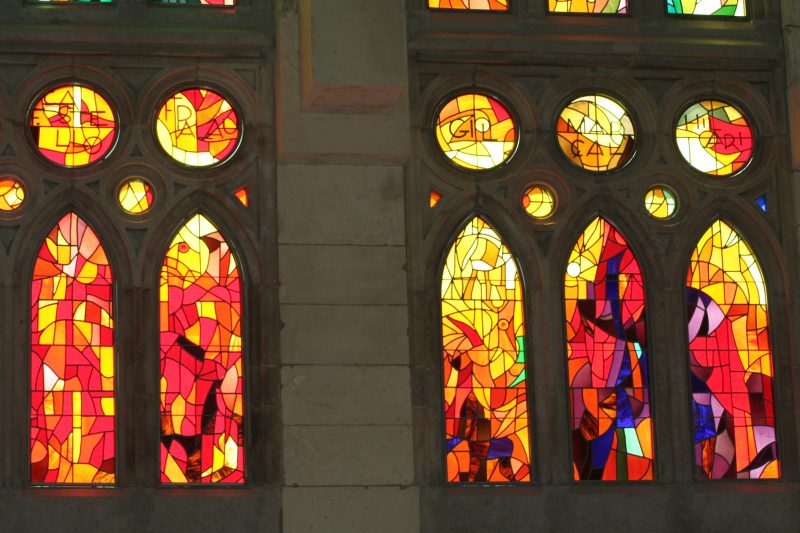 Tinted windows do add to the beauty of the church. Among other things, the display of colors on walls due to light passing through these windows add a new life to the buildings. This gives the visitors a great feeling. It just cannot be explained here- you need to visit the place and experience it to really know what it feels like.

15. The View from its Top is Fabulous 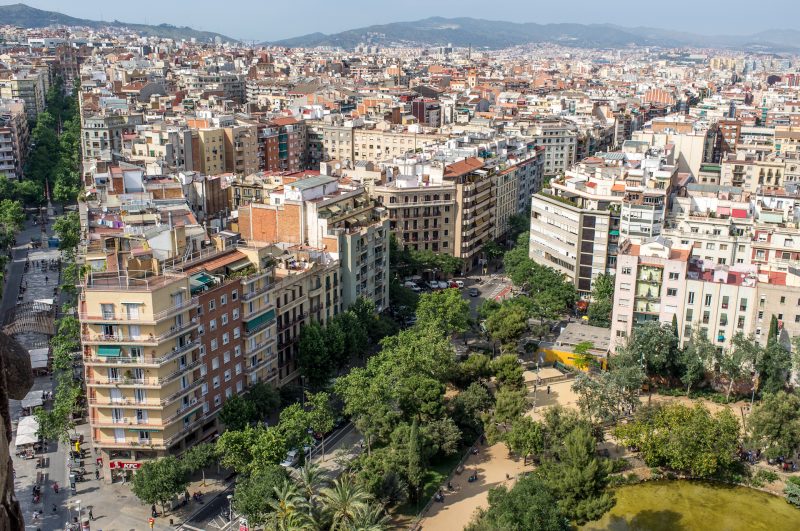 Who does not admire a nice view of the city from the top of this humongous church? On a serious note, you can get to have some stunning views from different places of this church. You will have to pay some extra money to get to the top of the place, but depending on your taste, the view may be worth it!

16. The Organ makes it a Complete Church 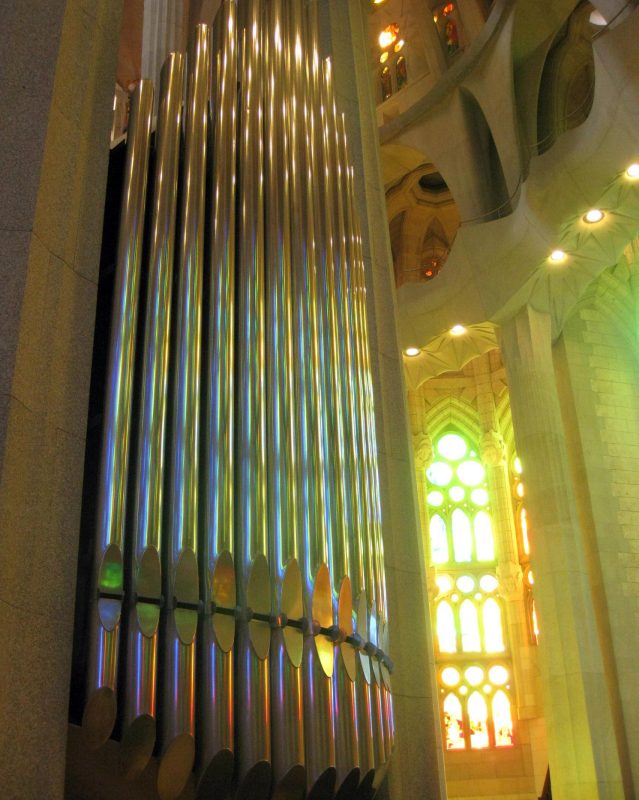 When the Sagrada Familia was consecrated in November 2010, an organ was also installed into it. This allowed for the church to be used for religious practices although its construction had not been completed. The organ is huge (just like the church) and is a nice thing to view inside the church.

17. Gaudi’s Tomb is Worth a Visit too 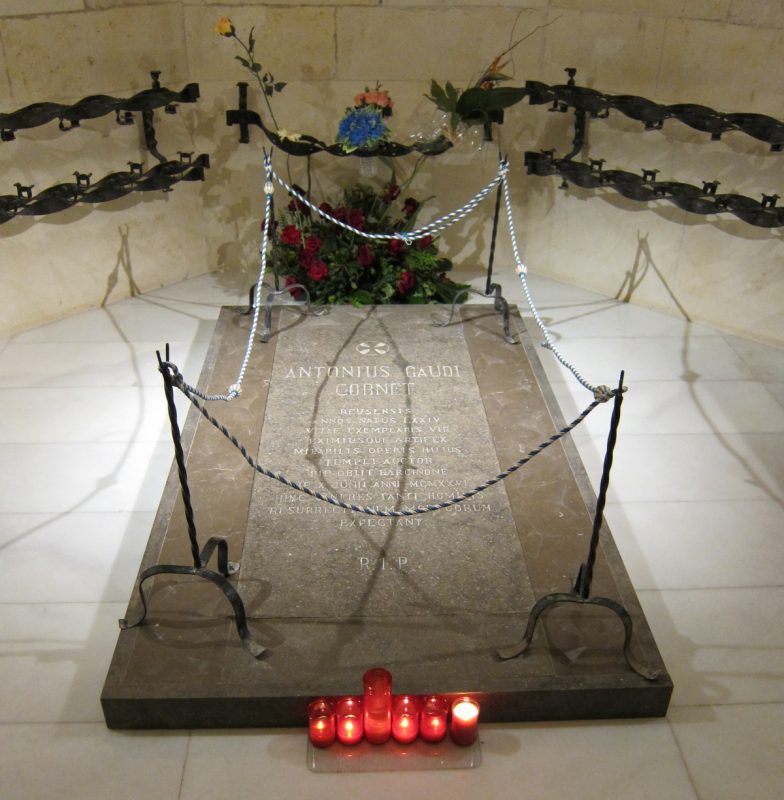 Sagrada Familia also contains the final resting place of the great architect (and one of its primary designers), Antoni Gaudi. Anyone who views his masterpieces spread throughout Barcelona may want to visit his tomb to pay homage to him- going to the Sagrada Familia gives one a chance to this as well.

18. The Roof (interior) is too Good to be ignored! 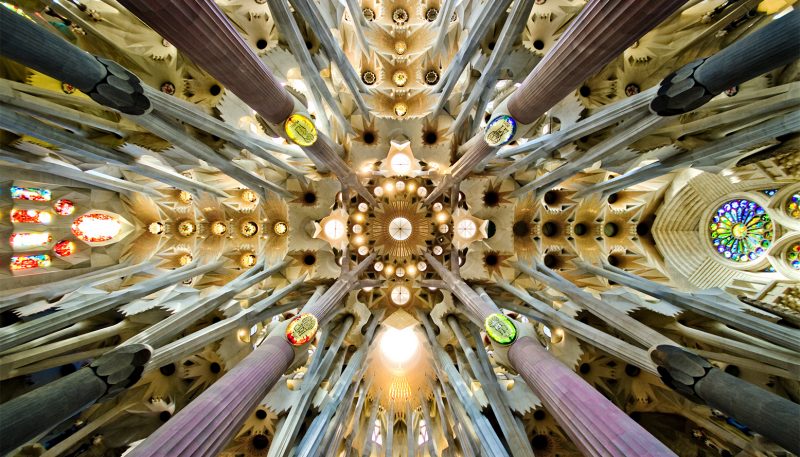 The interior roof has been designed and created so perfectly that you would not be able to spot a single flaw in it. Indeed, you can walk around inside the church and spend the entire day just looking at different parts of the roof and the details embedded in it! 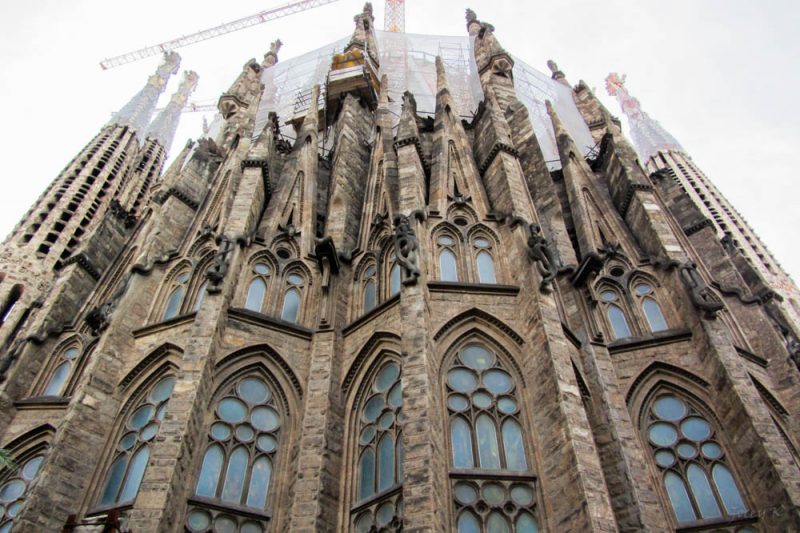 The Sagrada Familia contains many examples of geometric perfections as well. You can see many places (both inside and outside the church) where a great use of angles and shapes has been made. In addition, the transitions made between several shapes are a great sight too, particularly for lovers of geometry. 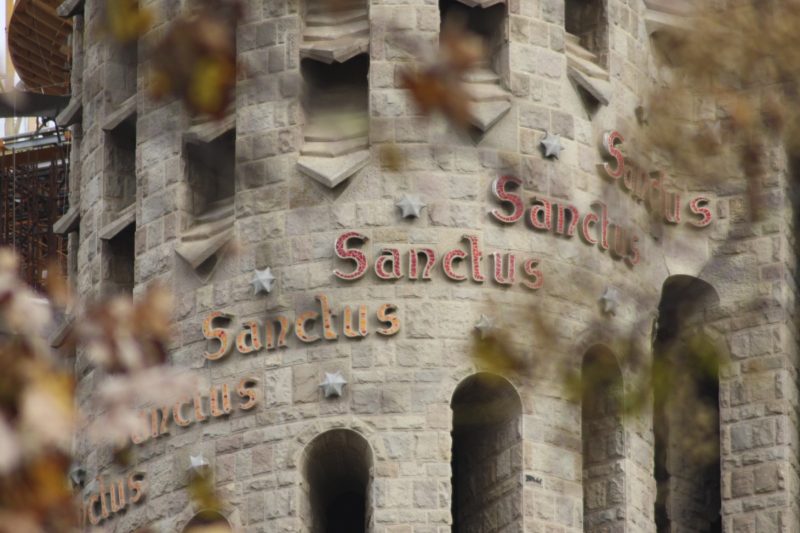 Almost every part of the Sagrada Familia is engraved to accommodate symbols, wordings or pictures so as to represent the themes held by each part as vividly as possible. For instance, the towers have words such as ‘Hosanna’ or ‘Excelsis’ written on them while the facades have been carved with symbols and images to suit their theme.

Sagrada Familia is one of the most unique churches in the world! Packed with the tiniest and finest details, the structure is visited by multitudes every year. The place is definitely worth a visit due to its many great features- so, if you ever visit Barcelona, do not come back without viewing this masterpiece!

10 Things to Know about Barcelona Port