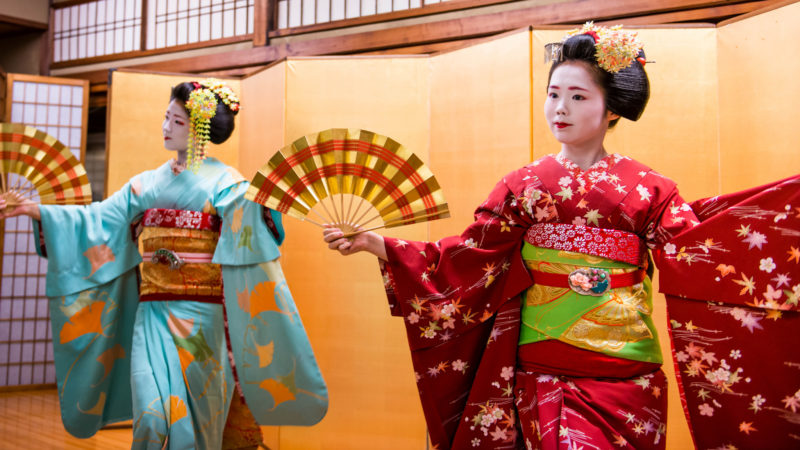 Geisha is an icon that can best be identified with Japan. They have been part of the Japanese culture for more than 400 years now. Geisha refers to a female entertainer who worked as hostesses. They showcased their talents and skills in classical music, dancing, games and conversation to entertain male customers. Their faces are painted in white, hair is tied  in traditional Japanese style and they wear colorful Kimono. Today, Geisha can still be found in Japan, especially in the city of Kyoto. In Kyoto, Geisha is known as Geiko, while Maiko is an apprentice Geiko.

It is a theater where you can witness Japanese traditional perming arts including tea ceremony, flower arrangement, koto or Japanese harp playing, gagaku or court dance, a comic play is known as Kyogen, Maiko dance, and Bunraku or puppet play. At the end of the show, Geiko will show up and dance a traditional Japanese dance.

It features the traditional Japanese accommodations with public bath overlooking a relaxing zen garden. They offer special packages for meeting a geisha, including authentic Kyoto cuisine. Some Geiko and Maiko in full makeup and outfit will entertain their guests by dancing. The guest can also have a conversation with them and picture taking as well.

Tea houses are exclusive locations Kyoto where maiko and geisha entertain their guests with their traditional dance. This is the place where you can have a conversation with a geisha while having a sip of their well-known green matcha. If you are active enough, can also join the traditional parlor games.

It is one of the districts in Kyoto where you can see many geiko houses. It has been the home for many geiko and maiko who have been living here since the 16th century. Kaburenjo Theatre is also located in Ponto-chō. This theater is the practice hall for maiko and geisha and is also the venue for performing the Kamogawa Odori consisting of traditional dances with singing and playing of different instruments.

It is located in north-west Kyoto and is the oldest Geiko district in Kyoto. The meaning of Kamishichiken is “Seven Upper Houses.” This refers to the seven tea-houses that was built in Muromachi era between 1333-1575. Geisha in this district are said to be subtle and demure and are good musicians and dancers.

15 Onsen to You Can’t Miss in Kyoto

7 Things to Know About Kyoto Market

7 Places to Eat Sushi in Kyoto