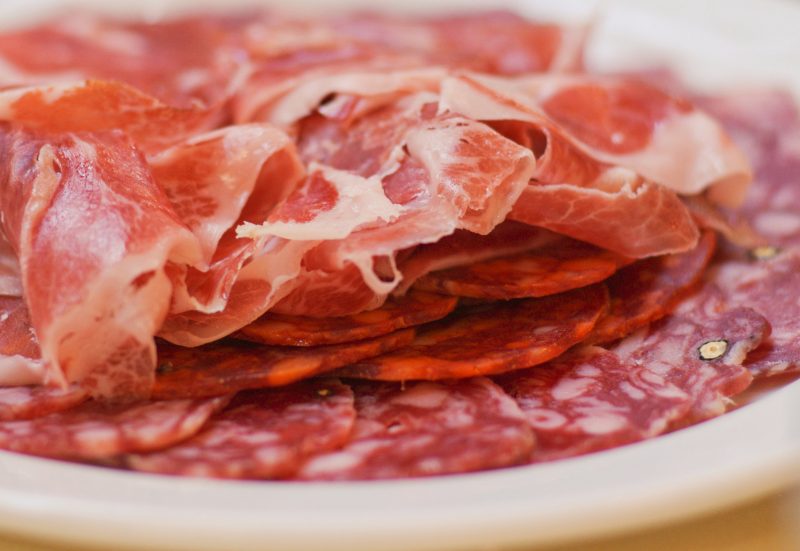 Spain is one of the most visited countries famous for a number of things such as beautiful beaches, festivals, flamenco, nightlife and delicious food. Spanish cuisine is very rich and diverse and each region offers a variety of special flavors. No matter how many historical sites you have visited in Spain or how many beaches you have walked, you are not familiar with Spain until you have tasted its delicious cuisine. Here is a list of some of the best foods you must try on your visit to Spain.

Tapas are one of the most popular foods to eat in Spain. Tapas are a range of different snacks or appetizers. They may be hot such as fried squid or served cold such as olives and cheese. You can get tapas everywhere in Spain, but the best tapas can be found in Madrid, the place of their origin. Tapas are also served in bars as a part of their traditional Spanish cuisine.

Gazpacho is another famous Spanish food originated from Andalucia. It is a cold soup made of blended tomatoes, garlic, olive oil, peppers and cucumber. During the summer season, people in Andalucia have this soup every day to keep themselves refreshed. In many tapas bars, Gazpacho is poured in Jugs and served at counters. There are many varieties of Gazpacho depending on the region. 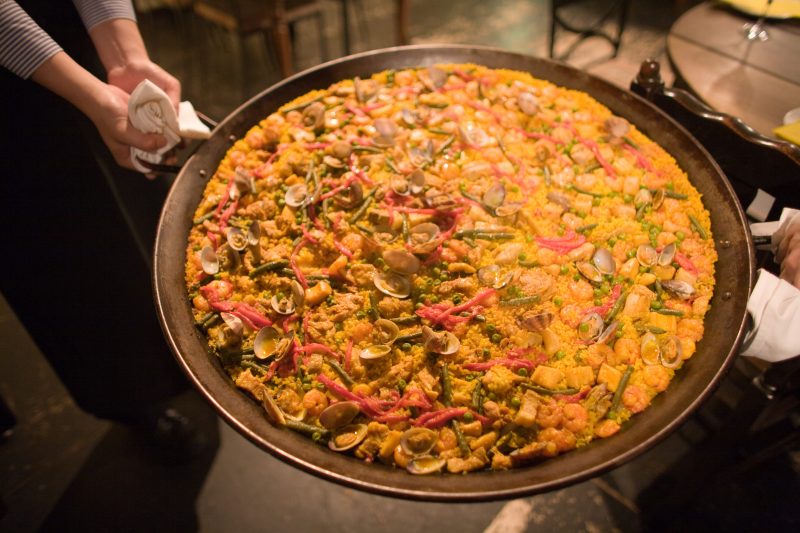 Paella is a traditional dish of Spain. It is a mixture of rice seasoned with rosemary or saffron and different meats such as chicken and rabbit with beans. Seafood paella is also served at many places in Spain. While you can have this delicious dish anywhere in Spain, but you will find the authentic and real flavor in its origin, Valencia. So don’t miss a chance to try this on your trip to Valencia. 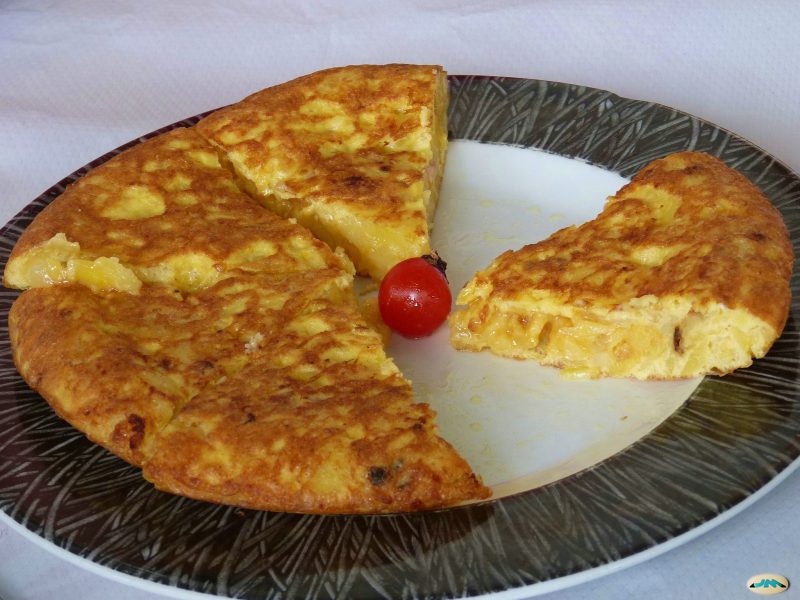 Tortilla Espanola is a famous Spanish dish made up of eggs and potatoes fried in oil. Onions can also be added sometimes. Peppers, chorizo or ham are also added. You can enjoy this yummy dish which is served as a meal, with tapas or simply in a sandwich. This dish can easily be found anywhere, anytime in Spain.

Chorizo is another famous dish eaten all over Spain. It is a delicious pork sausage with the flavor of garlic and other spices such as Spanish smoked paprika. It is originated from Iberian Peninsula, but now can be easily found anywhere in Spain. It is eaten alone or with cheese and bread or served with tapas.

Gambas al Ajillo is a delicious dish made of garlic, shrimps and olive oil. Other ingredients include parsley, lemon juice, Spanish paprika and other spices. It is one of the most popular dishes in Spain which is also very easily available. 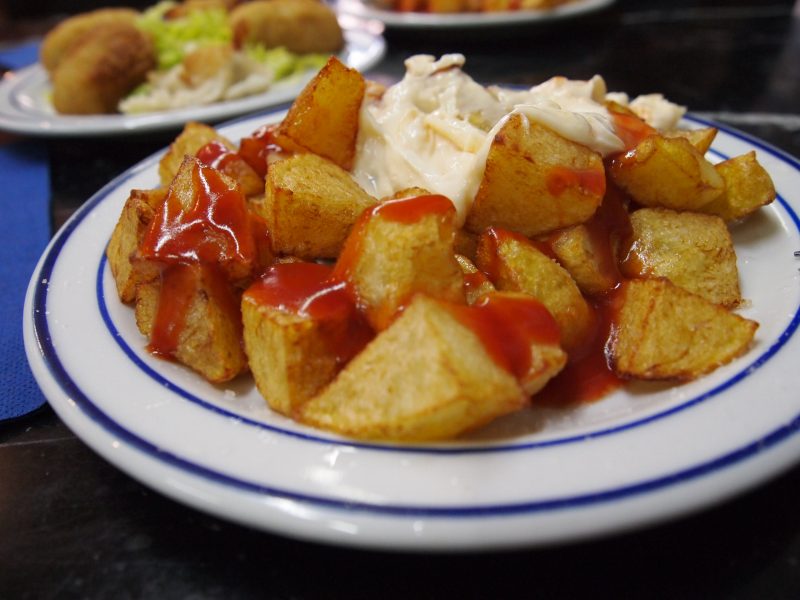 Patatas bravas are often served as tapas in bars and restaurants in Spain. It consists of cubed potatoes served with delicious sauce. There are many variations of this dish, but fried potatoes are a must to add. If you ever get a chance to visit Logrono in Spain, then don’t forget to visit Bar Jubera to eat one of the best and most delicious patatas bravas.

Pisto is a Spanish dish made of tomatoes, eggplant, onions, peppers fried in olive oil. Scrambled eggs and many other spices are also added. Pisto is originated from La Mancha. It is often served as a starter and also eaten as a side dish.

Bean stew is a delicious dish made of beans, meat and a variety of spices depending on the region. ‘Fabada’ is a most common form of bean stew that is available throughout Spain. It is often served as a starter but may also be eaten as a main course. Canned fabada is also easily available in many supermarkets in Spain. 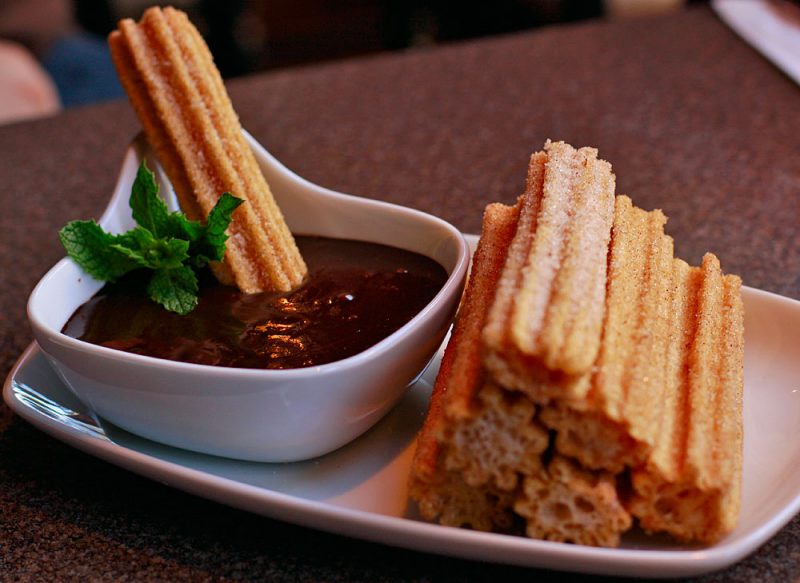 Churros are originated from Spain and are eaten worldwide. It is very popular and most delicious dish often eaten as breakfast, dessert or snack. The Churros include fried dough rolled in sugar or cinnamon served with a variety of chocolate sauces for dipping. Churros are easily available in many cafes or even street vendors in Spain.

10 Beautiful Beaches You Must Go in Spain

10 Things to Know about Segovia Aqueduct

10 Things To Do in Guardamar del Segura: Spain