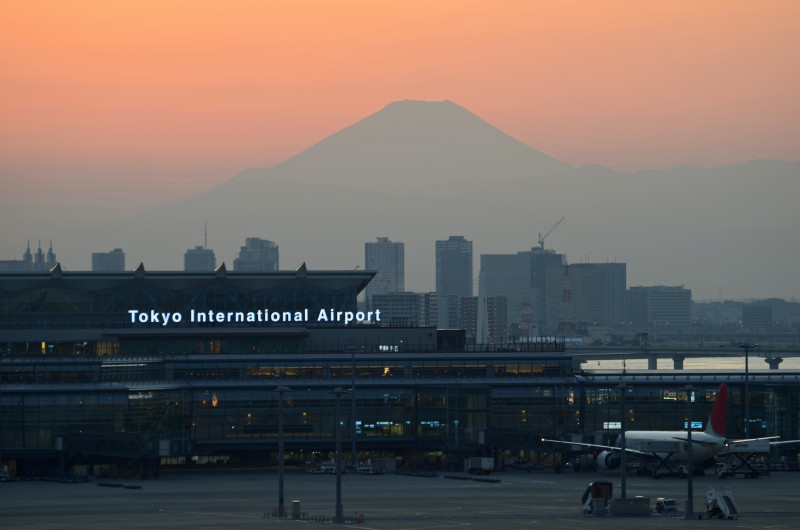 Tokyo International Airport is the official name to Haneda Airport which is one of the two main international airports that operate Tokyo, and is the primary base of Japan’s two major domestic airlines, Japan Airlines (Terminal 1) and All Nippon Airways (Terminal 2), as well as Air Do, Skymark Airlines, Solaseed Air, and StarFlyer. The airport is located 14km (8.7 miles) south of Tokyo center and is the closest airport from Tokyo city. Haneda airport was the primary international airport serving Tokyo until 1978 and until 2010 it operated almost all domestic flights to and from Tokyo as well as charter flights to a small number of major cities in East Asia while Narita International Airport was operating most of the international flights in and out of Tokyo area.

In 2010, a new international terminal was officially opened in Haneda airport right next to terminal 2 and together with a brand new runway allowing long-haul flights during night-time hours. In 2014, Haneda airport was officially opened to long-haul service during the daytime as well, with carriers offering nonstop service to 25 cities in 17 countries. In the past 2 years there is a major government effort to promote Haneda airport and encouraging the use of Haneda for premium business routes and the use of Narita for leisure routes and by low-cost carriers. The reason behind it was the massive growth in international tourism to the Tokyo area and by offsetting flights to both airport, the Japanese government hoped to manage this growth productively.

This article will help you learn all the important information about Haneda Airport, how to use it, and how to find your way around its complex, but first lets learn how to get to get in and out of the airport. There are 4 ways to get in and out of Haneda Airport which are all very comfortable and quick. The difference between them is basically related to where you want to get, how fast and your budget. Lets go over the 4 different transportation system available for you to choose from.

1. How to Get from Haneda Airport to Tokyo by Train?

Haneda Airport is service by two main train system. The Tokyo Monorail and the Keikyu Line. Both services offers an entrance which is about one minute walk from the arrival lobby to the ticket gate. The lobby and ticket gate are also located on the same floor, so there is no need to worry about lugging large bags up and down different levels. You can enjoy ease of access when returning as well, as the departure lobby is also located conveniently next to the trains station. 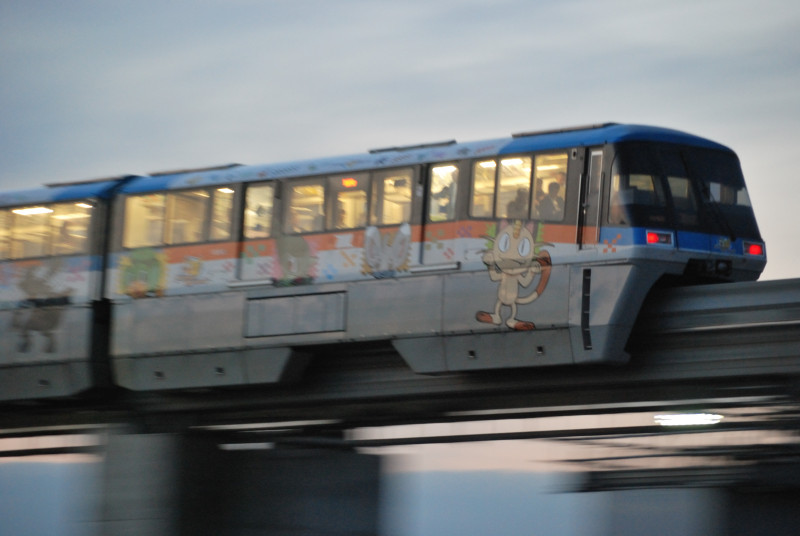 For full information about Tokyo Monorail service, please use this link:
http://www.tokyo-monorail.co.jp/english/ 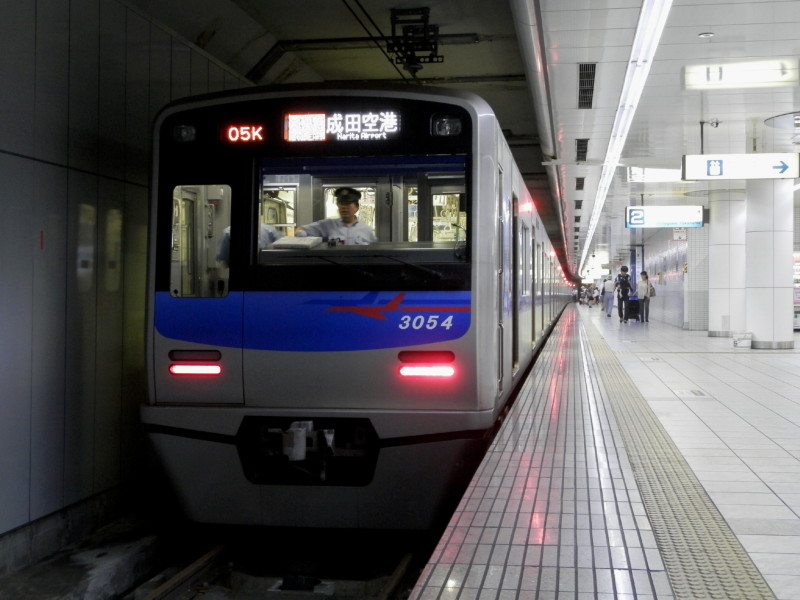 For full information about Keikyu Line service, please use this link:
http://www.haneda-tokyo-access.com/en/airport/pdf/guidebook_en.pdf

2. How to Get from Haneda Airport to Tokyo by Bus? 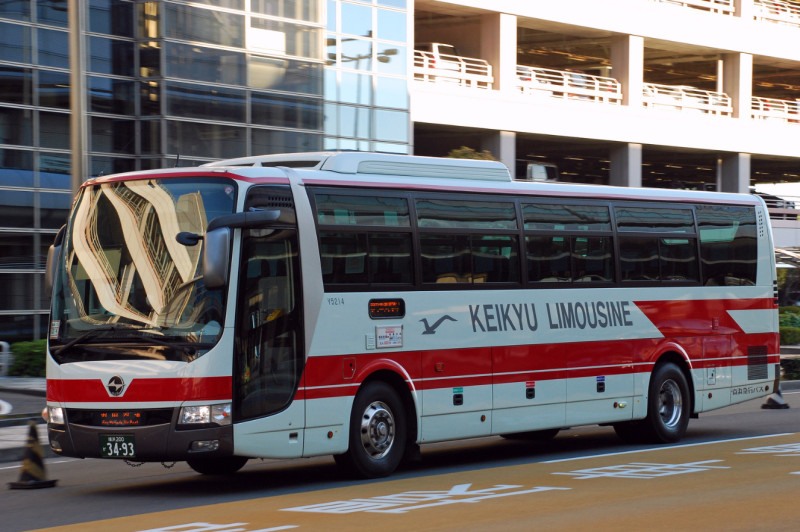 Keikyu Limousine Bus service is a very economic way to travel from and to the airport with set destination and many stops at most central hotel locations and city centers. Below si a list for the major routes the bus service offers:

For full information about Keikyu Limousine Bus service, please use this link:
http://hnd-bus.com/

3. How to Get from Haneda Airport to Tokyo by Taxi? 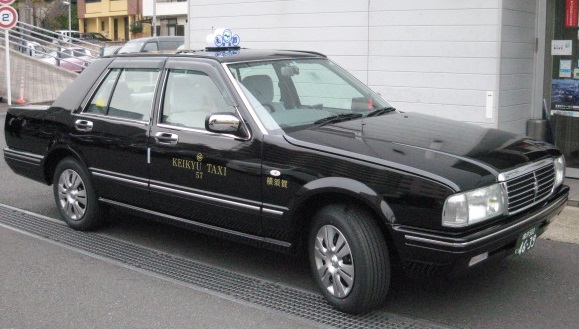 Keikyu taxi set-fare service is convenient for early morning and late night trips to and from Haneda Airport. The cost of a taxi ride from Haneda to central Tokyo is divided to two categories, night and day.

For full information about Keikyu Taxi service, please use this link:
http://www.keikyu-taxi.com/menu0201.html

** You can also pickup a regular metered taxi to any other specific location of your choice at Haneda taxi parking.

4. How to Get from Haneda Airport to Tokyo by Car? 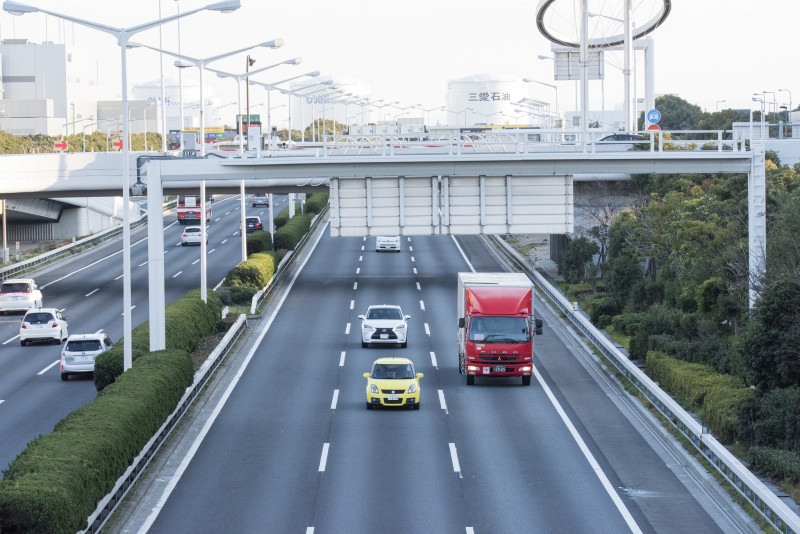 There are 3 ways to reach Tokyo from Haneda Airport (and back to the airport). Two ways are using the highways and one is using regular roads. If you are trying to reach Tokyo in the early morning hours or early evening, expect heavy traffic as you reach Tokyo center as those are the rush hours and roads are usually congested heavily at those hours.

5. Which Airlines are Located in Terminal 1

Terminal 1 of Haneda Airport is divided to two wings, the North and South wings and each is used by different airlines for departures.

6. Which Airlines are Located in Terminal 2 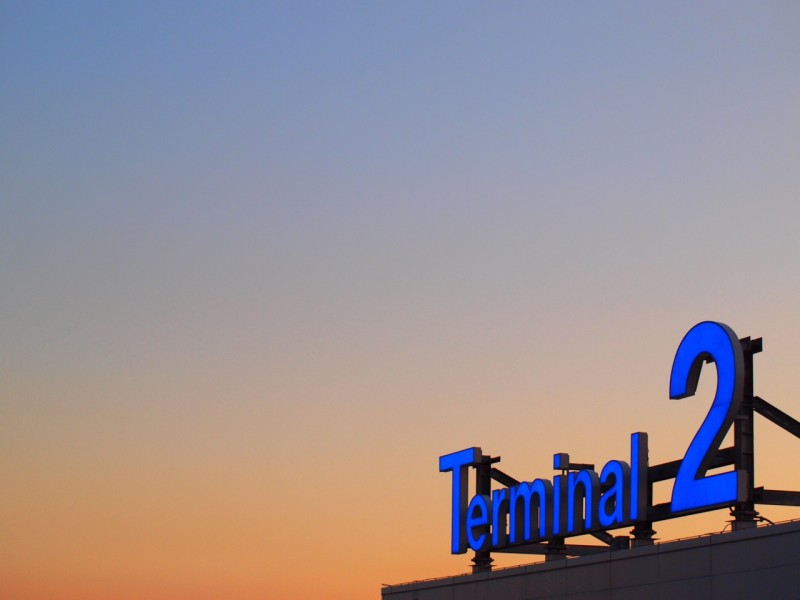 Terminal 2 and the connected international terminal are used by the following airlines for departures: 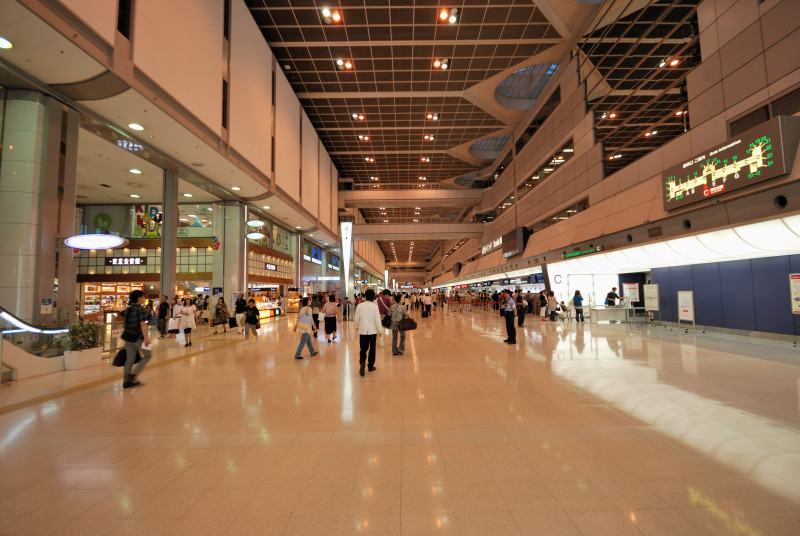 Terminal 1 building is 8 story high building with one basement floor and roof top floor. The basement of Terminal 1 is hosting the train station for both Keikyu Line and Tokyo Monorial Line. The 1st floor is the airport lobby where you can find exchange service booth, post office, cart pool, coin lockers, nursery, police station and the airport main information service booth. The 2nd floor is the main Departure lobby, the 3rd and 4th floors are where the Terminal 1 shops and restaurants are located. The 5th floor is a restaurant only floor, while the 6th and 7th floors are used for observation decks and coffeeshops. 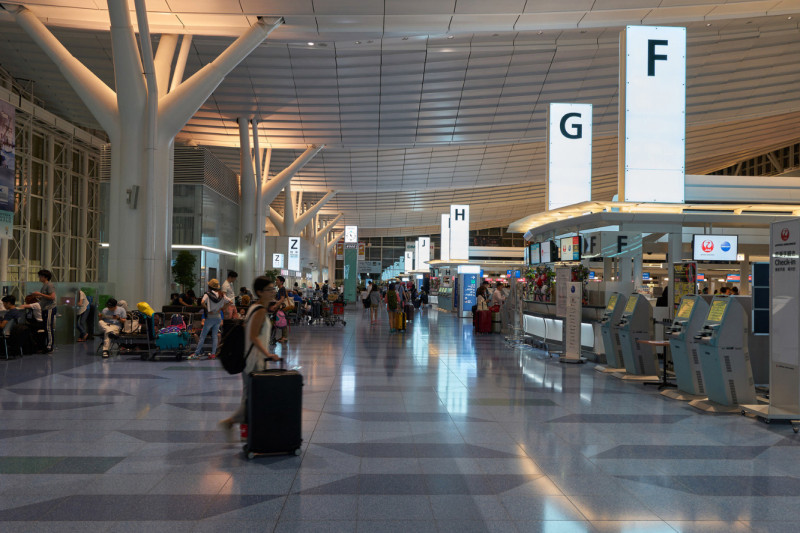 Terminal 2 building is connected to Terminal 1 in a long corridor and you can cross it with your cart and luggage. The basement floor of Terminal 2 is hosting the second train station of the airport for both Keikyu and the Monorail lines. The 1st floor is the lobby floor as well as the connection to the international terminal area. The 2nd floor is the Departure lobby, while the 3rd and 4th floors are where you can find the terminal shops and restaurants. The 5th floor is the observation deck and where you can find a couple of coffeeshops to relax and watch the view from.

9. Where and What to Shop in Haneda Airpot 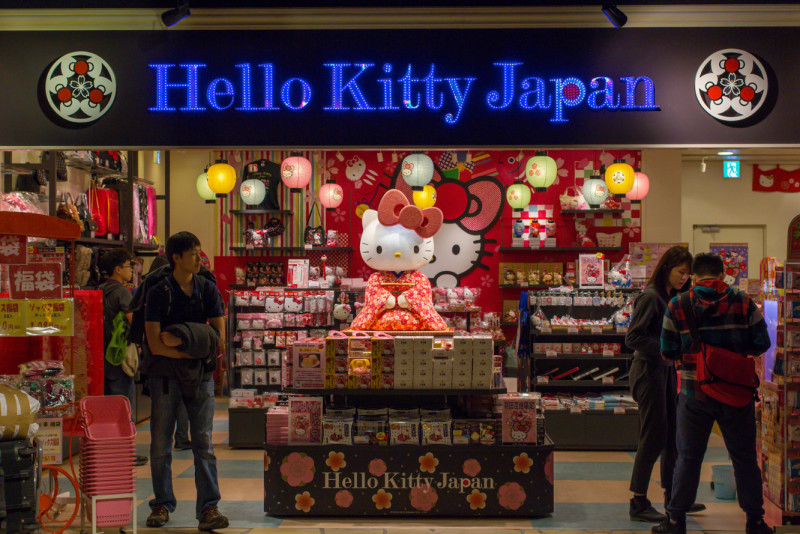 Both terminal 1 and 2 offers a variety of shops offering a wide range of products from souvenirs to packaged food, toys, fashion cloths and accessories as well as books and magazine stores. One of the more big store is the Captain’s Market store which offers wide variety of items from famous pastries to the most popular Japanese sweets. The PIER shops network is combing many smaller stores located all around the terminal floors and offers anything you might just need and forgot to get before you flight. The store also offers full lineup of books, travel goods, and character goods, including Disney, Relakkuma, and Fuji Television characters as well as wide variety of products ranging from Japanese and Western confectionery from major Tokyo confectioners, to otsukemono, and fresh food products from Kyushu, Hokkaidou.

*Please remember to have with you both your passport and your boarding ticket to be allowed to buy in the terminal shops as they are all tax free shops and will need those proof of flight from buyers.

10. Where and What to Eat in Haneda Airport 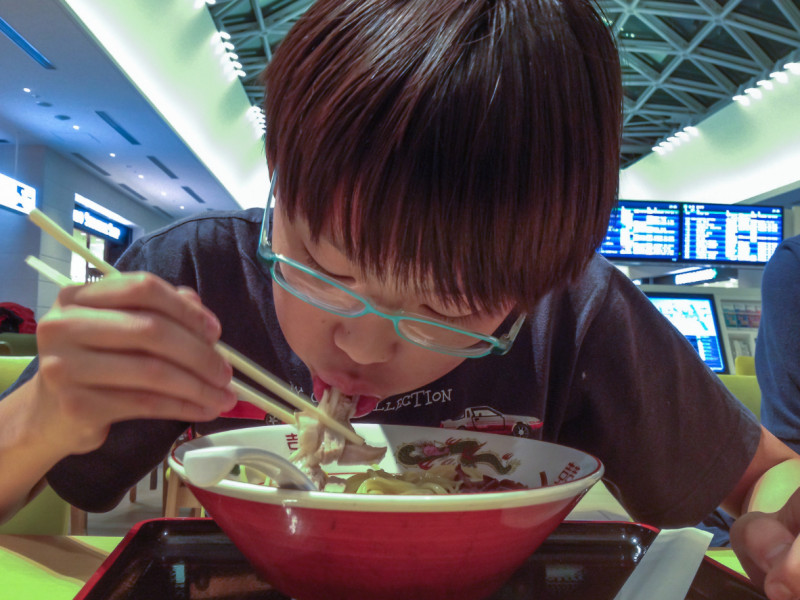 Haneda Airport offers wide variety of restaurants and places to grab quick food before or after flights in all its terminals. Visitors can find Japanese, Western, Korean, Chinese and other ethnic food restaurants, snack & fast-food chain stores, large food court, coffeeshops, and Izakaya stores. The Japanese food is probably the most common restaurants around the airport offering Sushi, Ramen, Udon, Soba and general Japanese dished which are common in Japanese Izakaya and local restaurants all over Japan. The food quality is pretty good and the service is quick and efficient allowing many customers to quickly get their orders and leave to their flights.

For a full restaurants listing, please use the following link:
http://www.tokyo-airport-bldg.co.jp/en/shops_and_restaurants/ 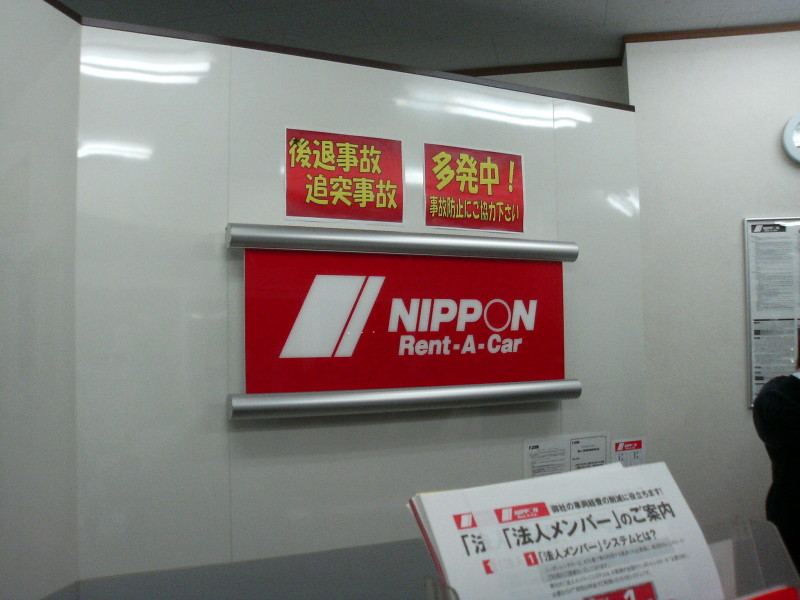 Haneda Airport offers 9 different car rental services around the two terminal with are run by national Japanese rental car services and operates 24 hours a day. Below is the list and location of each of the available services.

Haneda Airport offers free wireless Internet connection service by “Travel Japan WiFi” system operated by Wi2 Corporation and using Japan KDDI mobile network system. To get this service, you will need to download a special app to your mobile device and you can do it before you reach Japan. This special app will provides two weeks free access to over 60,000 Wi2 hotspots across Japan including all around Haneda Airport. Be aware that registration is not mandatory, however, if you do want to use the wider network provided ny KDDI when visiting Japan, you can get a “premium code” from one of several business partners at the airport, such as JAL or many selected shops around the terminals, register with full information and then get access to the company’s 240,000 hot spots nationwide, including at Starbucks outlets, PIA Corporation, discount chain store Don Quijote, and on the Airport Limousine Bus. This free WiFi hotspots service system works by using partner organizations to pay a fee to Wi2 for the right to advertise their services to users of the app, allowing the users to enjoy completely free service. 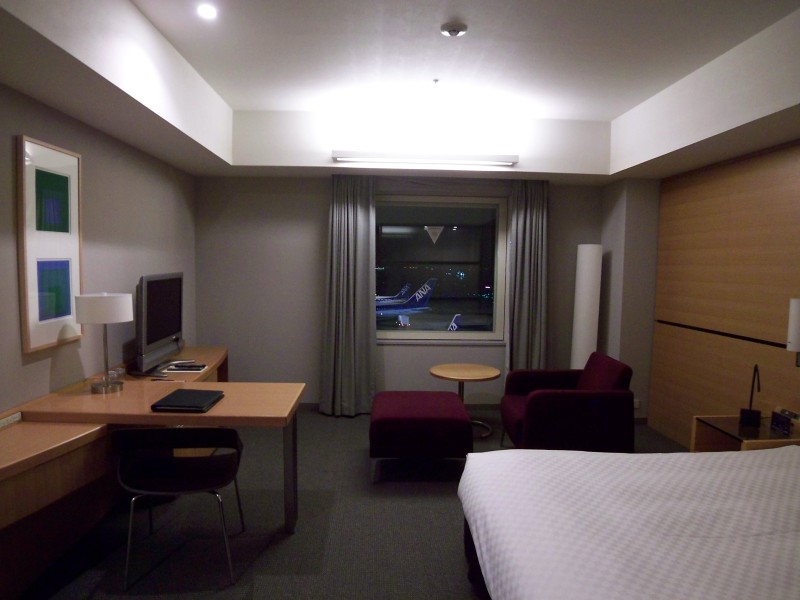 Haneda Excel Hotel Tokyu is located in Terminal 2  and offers air-conditioned rooms with free internet access and a restaurant offering a buffet breakfast with Japanese and western menu.
All rooms at Haneda Excel Hotel Tokyu have a minibar, flat-screen TV with satellite channels and safe, private bathroom and hairdryer. The hotel also offers room service, meeting and banquet facilities, laundry and dry cleaning service, breakfast in the Room and a currency exchange service. The hotel offers special shuttle bus to central Tokyo which takes about 20 minutes to Ginza area. 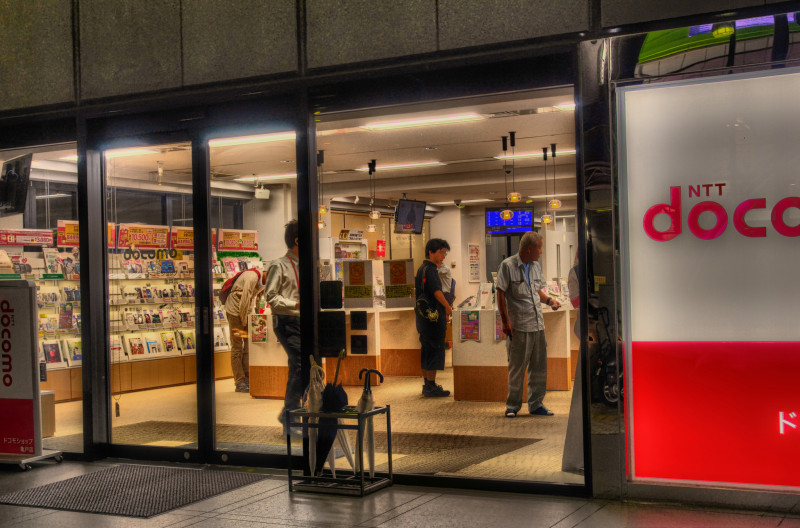 If you need to rent a mobile phone while visiting Japan, DoCoMo – Japan largest telecommunication company has set up a shop in the airport offering purchase or rental mobile phones while in Japan as well as assistance in regards to payments and service explanation. The shop is located in Terminal 1 on the 1st floor “Market Place” area. 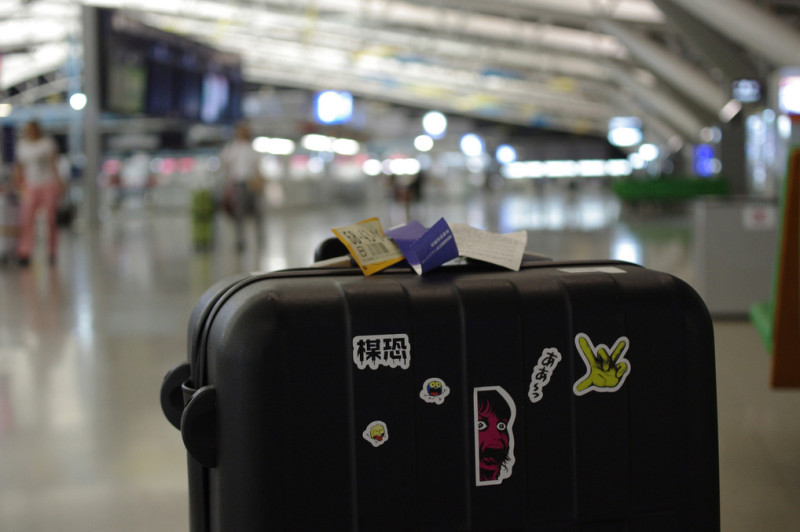 Both Terminal 1 and Terminal 2 offers temporary baggage services for travelers passing through Haneda Airport. Baggage can be stored for up to two weeks and the cost depends on the sum total of the height, width and depth of the suitcases or handbags you want to store. Please note that The maximum total height, width and depth accepted is 300 cm, and the maximum weight is 30 kg. Note, however, that such items may be still accepted depending on their shape.

Storage Pricing is as follows per day:

7 Zoos You Have to Visit in Tokyo