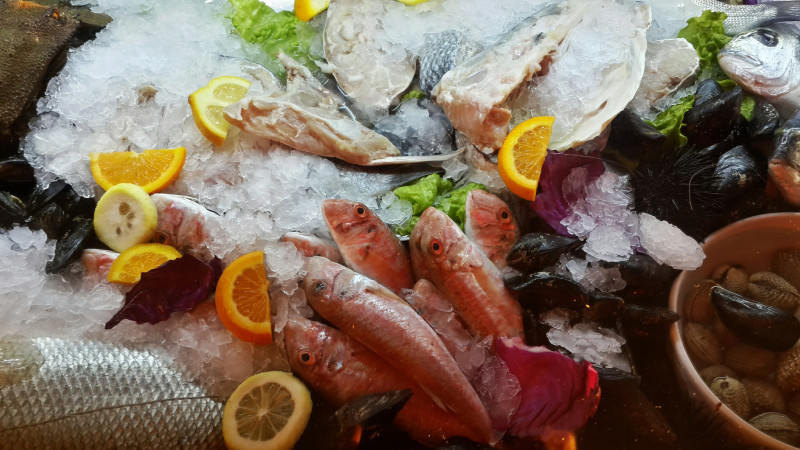 Hokkaido is well known for its delicious seafood. The waters around the island are different than those from the rest of Japan, providing a perfect habitat for fishes and other sea creatures. The seafood from the area is said to be the most delicious in the world and people from all over Japan travel to Hokkaido to taste it. Check out this list of the best 15 seafood you just have to try if you are in the area! 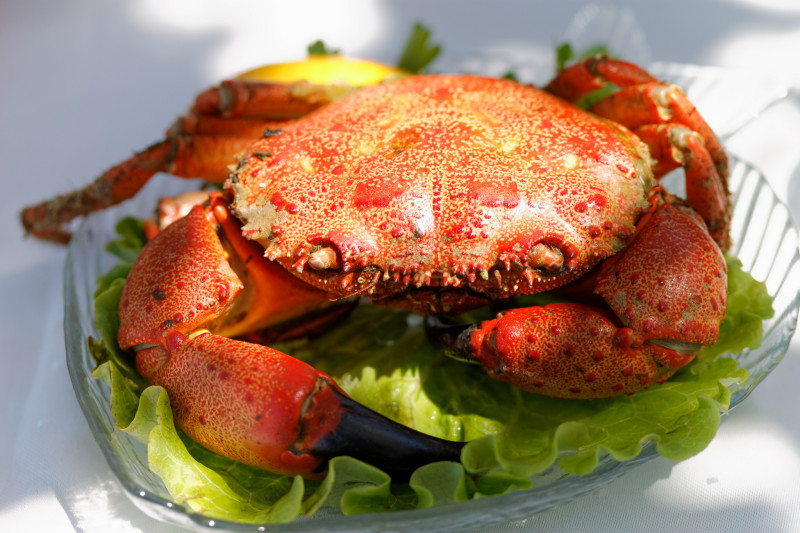 Crab can be eaten in a number of ways: raw, lightly brushed with soy sauce, boiled with a dipping sauce or in a variety of dishes, like kanisuki (crab hot pot), kanizosui (crab porridge) or kani korokke (crab croquette). Whatever the dish, you will notice its rich and sweet flavor.  The best place to have crab in Hokkaido is at restaurants near fish markets, when you can enjoy the freshest meat you can imagine. 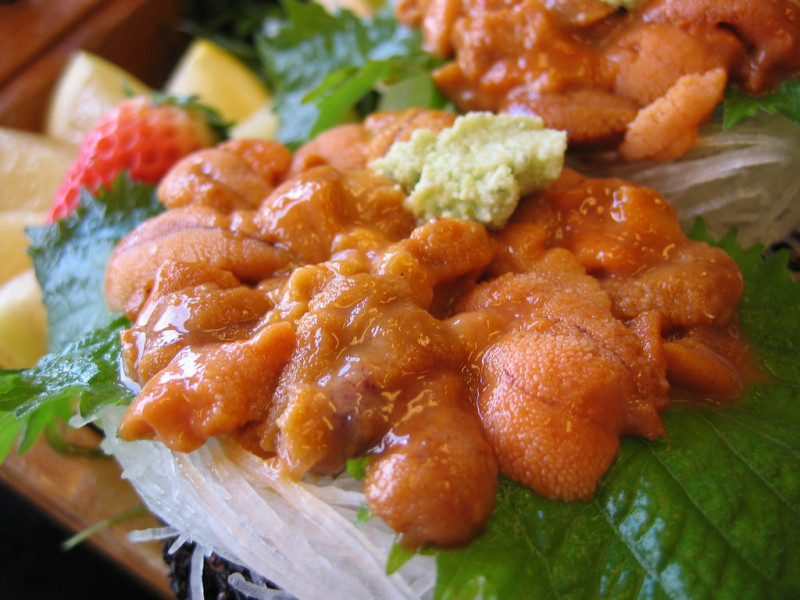 The edible part of sea urchins is represented by the sea creature’s gonads, the section which produces the roe.  It is golden in color and has a creamy consistency. Its flavor is light and sweet. While sushi is the most common way to eat sea urchin, it is not uncommon to find it in rice bowls or soups. The dishes are sometimes accompanied by sea urchin roe or raw quail egg. 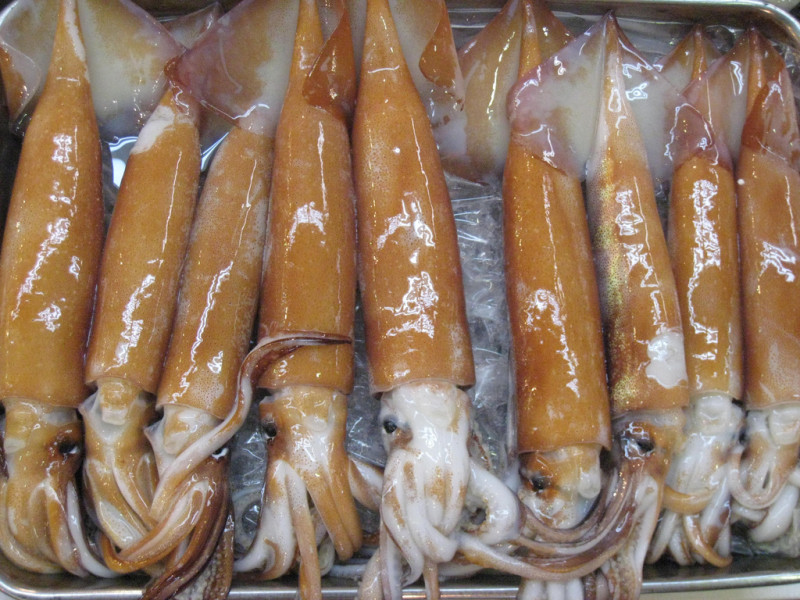 Squid is mostly eaten whole, stuffed with vegetables or as ikayaki, which means grilled squid. The squid can be fully grilled or just parts of it, like the tentacles or sliced rings from its body. Grilled tentacles on sticks are especially popular during festivals. There is also a squid dish called odori don, which refers to a dancing squid in a rice bowl. The squid is not alive, but its tentacles move in contact with the soy sauce. 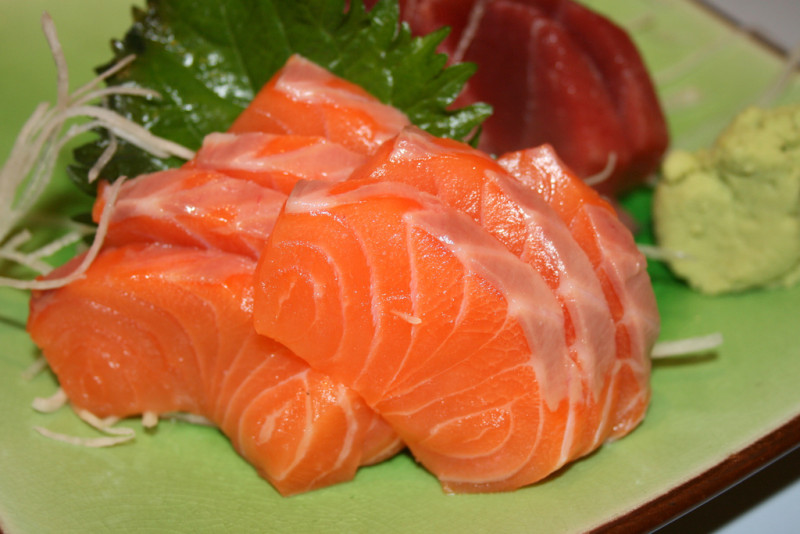 Salmon and salmon roe are extremely loved in Japan, and Hokkaido’s fresh salmon is even more delicious. The region’s waters are so fitted for this fish’s habitat that Hokkaido accounts for 80% of Japan’s salmon catch. You will often come across salmon and salmon roe sushi, served next to soy sauce. Its texture is very soft and the flavor is very rich. Other dishes that include salmon are spicy rolls, rice balls, hot pots and rice bowls. 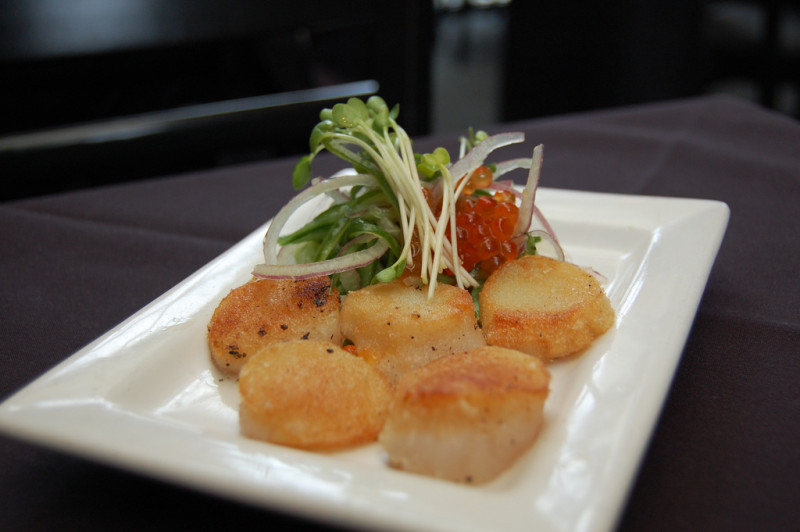 Scallops are mollusks that have to convexly ridged shells. The edible part of scallops is the white muscle that moves the two shells. This muscle has a fleshy texture and a mild sweet flavor. The scallops harvested in Hokkaido have an even creamier texture. Scallops are eaten raw, fried or baked, with seasoning such as soy sauce and miso and served in salads, next to noodles or in rice bowls. 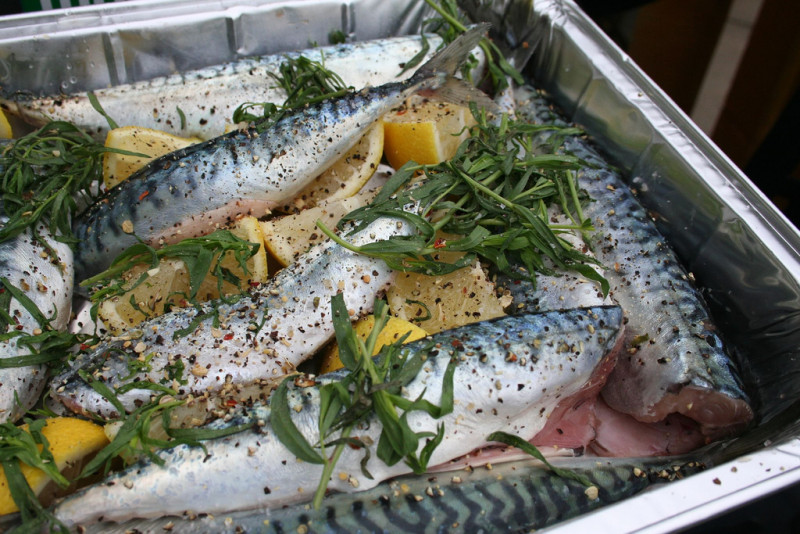 Fresh mackerel has a charming taste. It slight oiliness gives it a deep flavor, which is amazing combined with its sweetness. It can be prepared in various ways: as sashimi, as oshizushi (pressed sushi), stuffed with rice, as heshiko zuke (pickled in miso paste and sake), grilled on a stick, grilled and sliced, deep fried or simmered with miso, sake, soy sauce, ginger and mirin. 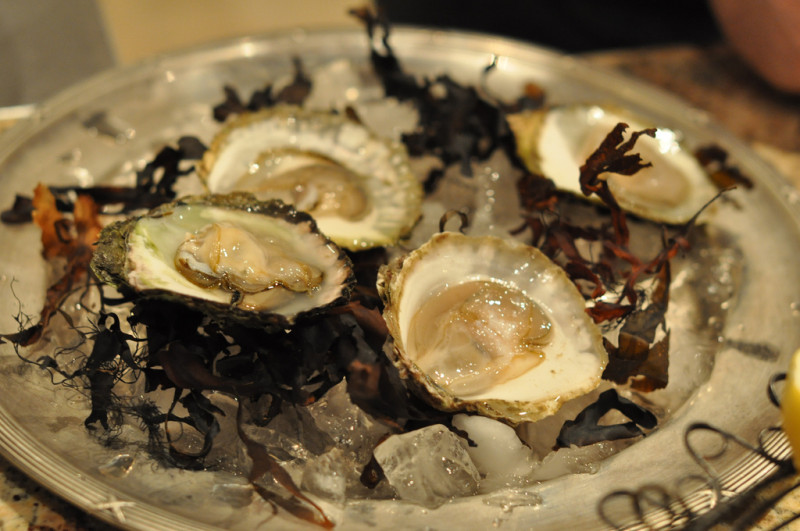 Oysters are occasionally called “sea milk” because they contain a lot of proteins and minerals. In Hokkaido, they are harvested from lakes that gather water from the nearby mountains, creating the perfect environment for the freshest oysters. They are consumed raw or in various ways such as fried after being coated in flour and breadcrumbs, in hot pots, over rice bowls or various types of noodles. 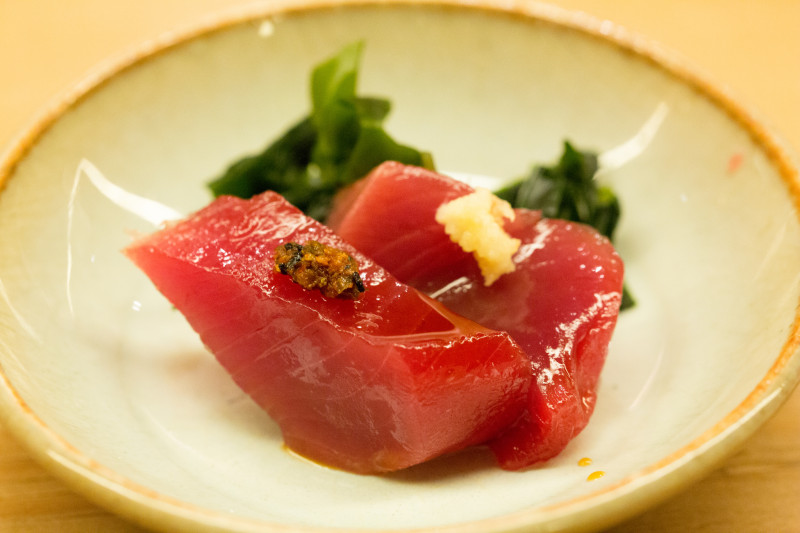 Tuna is among the most delicious seafood you will ever eat. While also eaten fried or grilled in different dishes, the best way to enjoy it is raw as sashimi, nigirizushi or maki rolls. The tastiest part of it is the so called toro, which refers to the fish’s belly fat. The toro is among the most expensive dishes found it menus, but really worth trying. Its delicate and rich taste is something you will hardly find in other fishes. 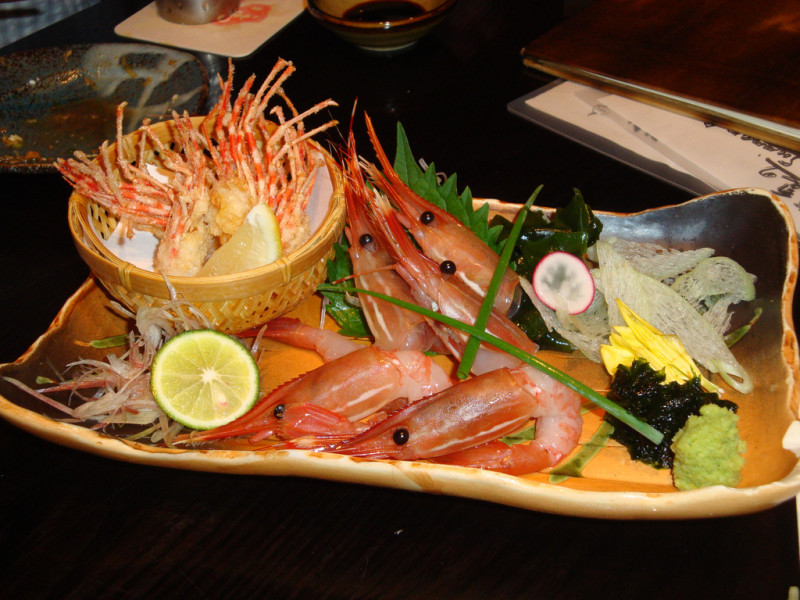 Shrimps are crustaceans covered in hard shells.  The edible part of shrimp is the tail, being the tastiest and the easiest to eat. It is eaten after lightly cooking it until changing color to light pink. It is often used in dishes as sushi or made into tempura ebi, which refers to shrimp fried in tempura batter, or ebifurai, which means shrimp covered in flour and panko (Japanese breadcrumbs) then fried. 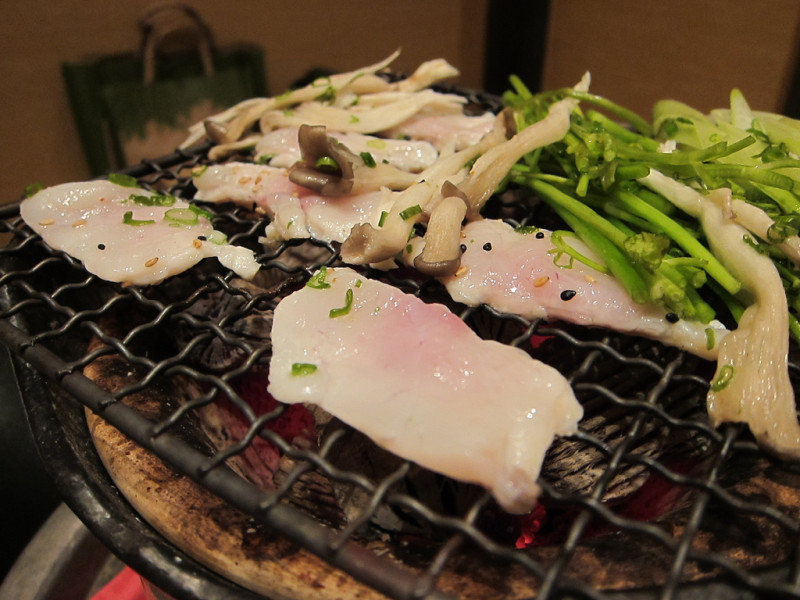 The blowfish is regarded even by the Japanese as a high class dish. Due to its internal organs containing poison, only certified chefs are allowed to use it in cooking. The most common way to eat it is raw, as sashimi. It is sliced so thinly that it almost looks transparent. Other popular ways to eat blowfish is in hot pots together with other vegetables or grilled in placed in sake. 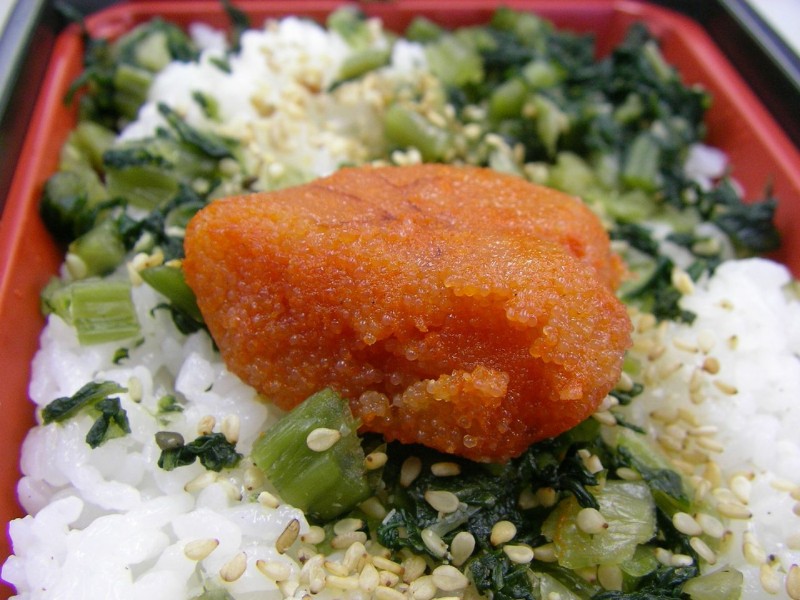 Mentaiko refers to marinated pollock roe. The roe are marinated in salt and chili pepper, sake and konbu seaweed, giving them a spicy taste. It is used as a filling in rice balls, as a topping for rice bowls and as a topping for noodle soups. It also recently became popular as an addition to spaghetti, where mentaiko is mixed with butter and mayonnaise is added. The sauce is used then over the pasta. 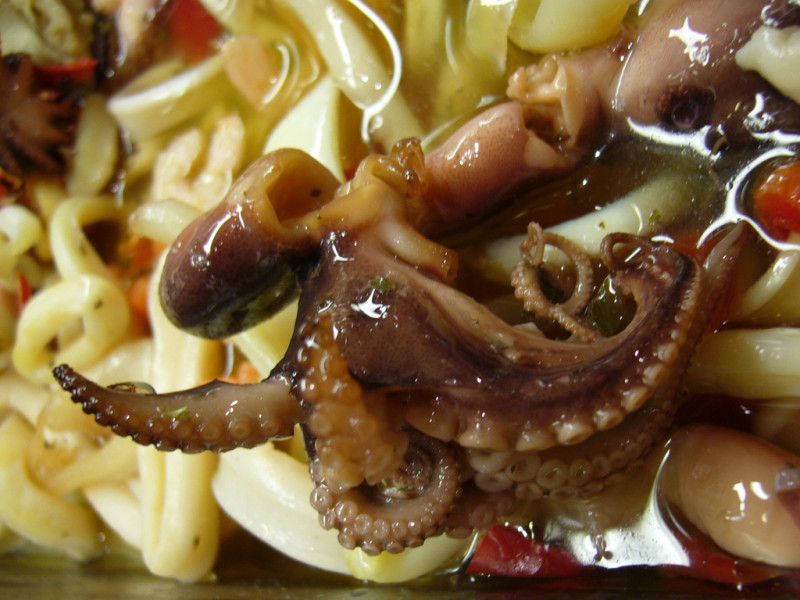 Octopus is a very popular seafood in Japan, most often eaten as takoyaki, which means s “fried octopus” and refers to bite size octopus pieces that are battered and then fried in a special pan with round indentations. The snacks are then served with a special sauce (similar to Worcestershire sauce), mayonnaise, seaweed flakes and dried bonito fish flakes. It is also common to eat it in salads or as sushi. 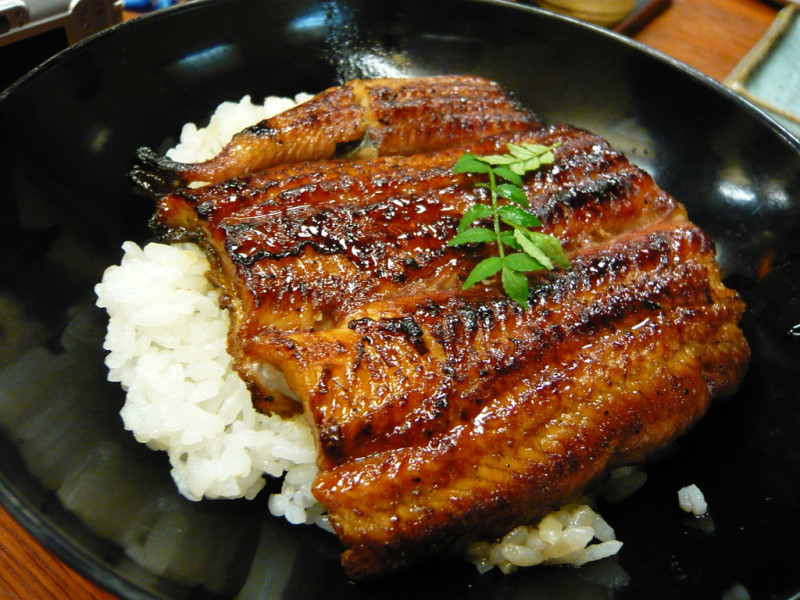 The eel is an amazingly delicious seafood that is always cooked before using, due to the fish’s poisonous blood. It is often eaten as sushi, as unadon (sliced eel over a bed of rice) , as kabayaki (grilled eel on a stick) or simply grilled and sliced. It is commonly brushed with tare, a sauce made from mirin and soy sauce. Its texture is crispy on the outside and tender on the inside. 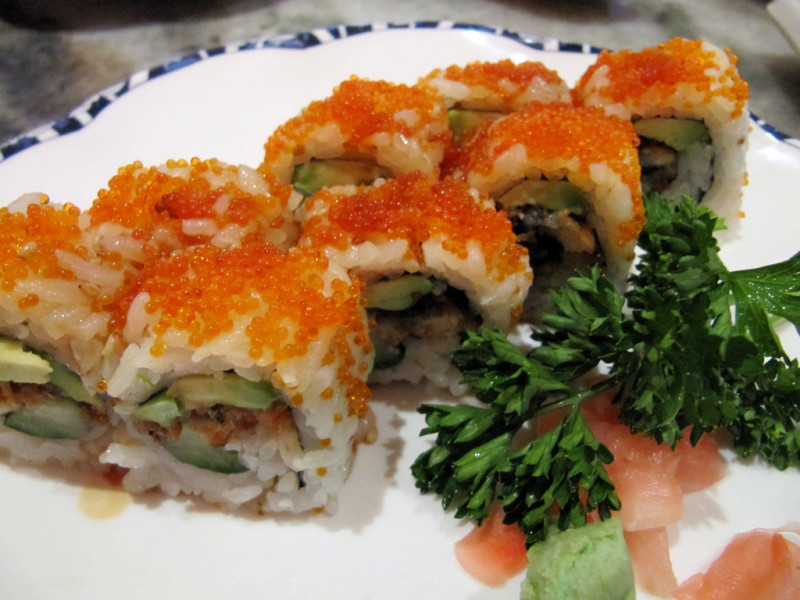 Tobiko refers to flying fish roe. The roe is smaller than those of other fishes, ranging from 0.5 to 0.8 mm and has a crunchy texture.  It is most commonly eaten in sushi, where a strip of seaweed is filled with the eggs. Its natural color is  orange, but other ingredients are sometimes used to change the color, such as squid ink to make it black, wasabi for green and yuzu fruit to make it yellow. 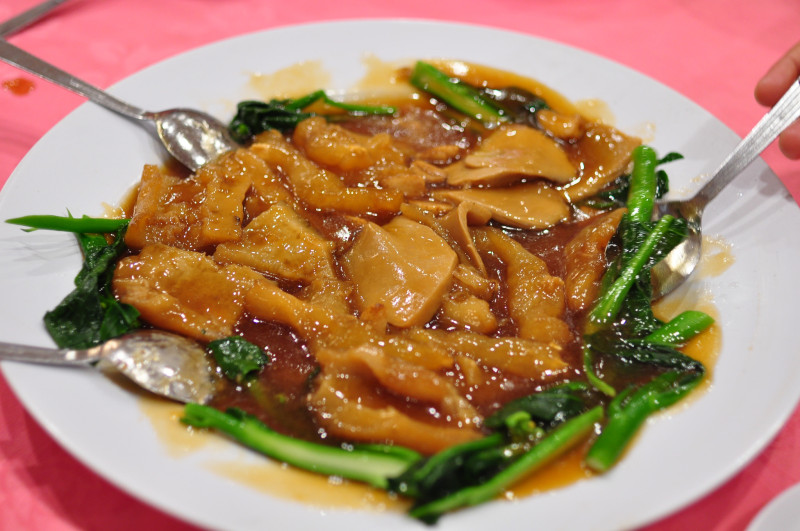 The sea cucumber is a marine animal considered a delicacy in Japan. To prepare it, the internal organs are removed and the remaining cavity is well cleaned. It is then boiled in salt water and dried. When used in cooking, the dried sea cucumber is softened once again by being soaked in water for several hours. They are then used in soups, hot pots, stir-frys, or stuffed. They is also commonly eaten raw as sashimi.

Enjoy all these exquisite dishes in Hokkaido! Have a good trip and travel!

Best 10 Things To Do in Hokkaido: Japan

15 Things To Do in Furano

7 Best Hotels to Stay in Niseko