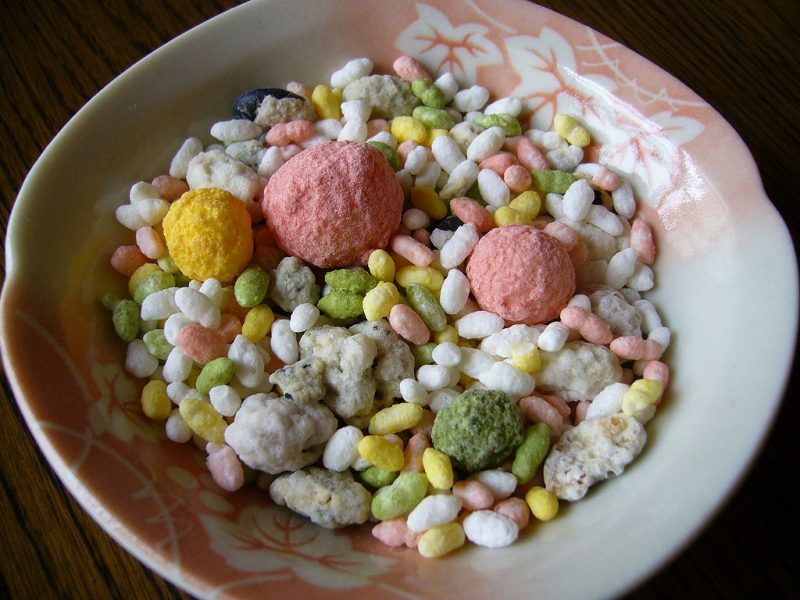 Japanese food culture has its fair share of traditional confections and they often come in a multitude of shapes and tastes. Japan is a haven for the sweet tooth, with an incredibly rich and varied culinary culture and Japanese confectionery plays a vital part in it. While Japan is principally popular for the dishes like sushi, noodles tempura, rice and kobe beef, there’s a plethora of other superb dishes to appreciate the food culture of Japan. Arare, a popular bite-sized Japanese cracker, is one of those confectioneries that delight the taste buds just the right way.

Arare is a popular Japanese confectionery made from glutinous rice (sticky rice) and flavored with soy sauce. These bite-sized snacks actually belong to the group Senbei, which in fact are made from rice or wheat flour.They were originally enjoyed as a casual snack and used to come in different shapes, sizes and flavors. Arare is just the smaller version of senbei.

Arare comes in different shapes and sizes, while some are sweet, others are savory. One of the locals’ favorite is the Nori Maki Arare, a traditional yet flavorful Japanese snack (rice crackers wrapped in seaweed). They make a healthy snack food, better enjoyed with a glass of beer or tea. The crunchy green peas or peanuts coated with wasabi, is another variation of arare, which adds a good amount of spicy flavor to the snack.

This classic Japanese confection is a traditional way to celebrate the Doll Festival (Hina Matsuri) on March 3rd, known as the Girl’s Day in Japan.The arare consumed during the festival comes in different colors – pink, yellow, white, brown and light green. Hina Matsuri is celebrated to seek blessings for the young girls for their growth and happiness.

It began appearing in the early 1900s, when arare was believed to be brought to the U.S. by the Japanese immigrants who arrived in Hawaii as contract workers for the sugarcane and pineapple plantations. The Hawaiians became so obsessed with it that they even started mixing arare with the popcorns. The snack is often called kakimochi or mocha crunch in Hawaii.

The shapes if arare is entirely a different story, with every shape being influenced by the region it was developed. These tiny, bite-sized snacks are also found shaped like animals (mostly like the badgers), maple leaves, seeds or cherry blossoms. They also come in stick shape and ball shape, with nuts inside.

The variety of Japanese confectioneries is tremendous, from traditional sweet and crunchy snacks to the delicious wrapped confections that please the eyes and delight the foodie inside you. Happy eating!

15 Snacks You Must Try in Japan

10 Restaurants To Try In Yokosuka