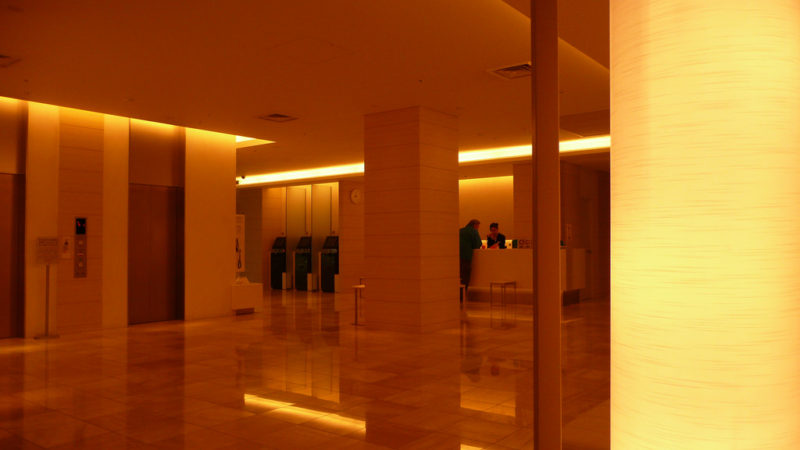 The Narita Airport is 90 minutes outside of Tokyo, while not a problem for most travelers, if you have an early morning flight or arrive late at night that hour and a half can make all the difference! Instead of trying to navigate the off hours transportation, grab a room at one of these amazing hotels close to the Narita Airport.

You can’t get much closer to the Narita Airport than the Narita Airport Rest House. This hotel is in the airport. They offer air conditioned rooms, a breakfast buffet, free wifi, and complementary shuttle rides to your terminal. It’s not the most luxurious option but it is the closest!

Opened in July of 2014 the nine Hours (9h) Narita Airport capsule hotel provides an easy overnight stay at the airport. Located in the Terminal 2 car park, it is perfect for early or late night flights. Or anyone who wants a bed to sleep on for a few hours during a layover. The capsule hotel offers basic necessities; a bed, locker facilities for your luggage and everything you need to take a nice hot shower.

The Narita Tobu Airport Hotel is a great option if you need lots of space and room options. They boast free wifi in all their rooms and two spectacular onsite restaurants. Best of all is the free shuttle bus service that goes direct to and from the airport!

The Hotel Nikko Narita offers several onsite conveniences such as wifi in the rooms, a 24 hour convenience store in the hotel as well as currency exchange service for guests. There is a delicious on site restaurant where guests can selects either a western or a tradition Japanese breakfast from the buffet.

The Marroad International Hotel Narita is the largest hotel in Narita boasting 801 rooms. Luggage storage is available as well as a tennis court and an indoor swimming pool for guests who want to stay active during their stay. The Naritasan Shinsho-ji Temple is approximately 15 minutes away.

The rooms at the ANA Crowne Plaza Narita are all air conditioned, soundproofed and have attached bathrooms with a full bath. There is a free shuttle service that takes guests from the hotel to the airport, the train station and even to the city center of Narita.

The Hilton Tokyo Narita Airport has beautiful rooms with the full list of modern amenities including wifi and HDTV. There are 3 onsite restaurants boasting quality Chinese, Japanese and international fare as well as an amazing health club with a truly excellent gym. Pretty much an all-around great place to stay.

So nice they named the Narita Excel Hotel Tokyu Hotel twice! This lovely hotel offers a free shuttle bus that not only goes in between the hotel and the airport but also to the JR train station to allow guests easy access to the rest of Japan. The rooms come with all major amenities and includes laundry service.

The rooms at the Richmond Hotel Narita come with all the normal amenities but also includes luggage storage and rental laptops at the front desk. There is a breakfast buffet as well as traditional meals available for lunch and dinner. Free shuttle rides to the airport and your very own electric kettle are also provided.

The Mercure Hotel Narita is only a minute away from the JR train station and a 15 minute walk from downtown Narita. Complementary shuttles to the airport are provided, as well as an outstanding work out facility that includes a racquetball court and a billiards table.

Hopefully your next trip in or out of Narita Airport will be much more relaxing as you made the smart choice to stay close by! Remember that a relaxed traveler is a traveler with happier memories of their amazing trip.

10 Things to Buy in Narita Airport

20 Things to Do in Narita

20 Things You Have to Know About Tokyo Disneyland and DisneySea