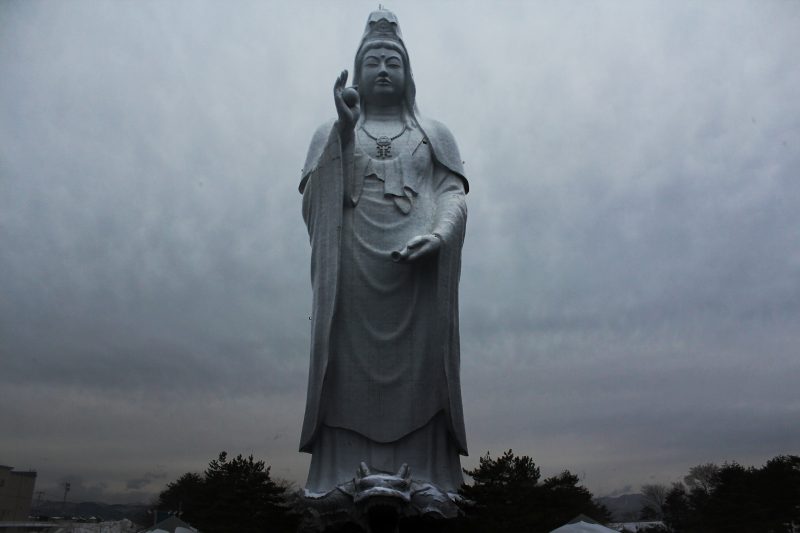 Sendai Daikannon is an enormous statue in the Sendai region. At 100 meters, it is the 6th largest statue in the world. It is a statue of the Japanese Buddhist Bodhisattva. It is usually kept out of local tourist guide books, but it is hard to miss this majestic statue. Check out these 5 reasons, why you should come.

The first thing that really strikes people is the incredible size of the statue. Many are in awe of the Sendai Daikannon. It is so big, you can notice the details of the Daikannon  holding a jewel in her right hand and a water flask in her left.

2. It looks magical during snow days

During snow storms, when everything is pure white, the statue looks as if it has come out the mist. It truly looks even more spiritual and beautiful against the quiet backdrop of a snow day.

3. You can see it even in the city

As you walk up the 12 stories, you can see the 108 forms of Buddhist statues. Every statue is a representation of human earthly desires. There is a statue for jealousy, greed, and selfishness. You can put small offerings at the statues and say a prayer in hopes that negative part of your personality will go away.

5. The spiral staircase inside

Once you get inside the Sendai, there are twelve stories of stairs. You have the option of taking the elevator, but many climb all twelve stories as a pilgrimage. The top floor is a prayer area and you have a great view of the city up there.

The Sendai Daikannon is a beautiful, religious monument and should be experienced if you are in the area!

10 Best Restaurants to Go in Sendai

5 Things To Know About Sendai Airport