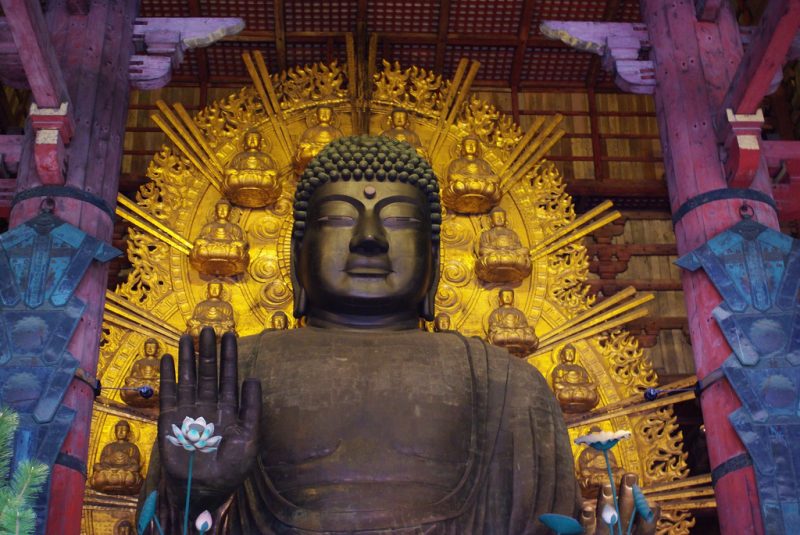 Todaji is very famous in Japan and is listed as one of the Historic Monuments of Ancient Nara. The temple also served as the headquarters of the Kegon School of Buddhism and is considered as the main attraction of the city. Deers which the locals refer to as the messenger of the Gods, freely roam the temple and would often interact with the temple’s visitors.

The Daibutsuden also known as the Great Buddha Hall is considered as the largest wooden building in the world. What most people doesn’t know is that the current structure is only 2/3 of its original size. The main hall has been rebuilt twice due to fires and the reconstruction of the Daibutsuden was 30% smaller than its predecessor.

On the year 743, Emperor Shomu decreed that all the citizens should support the construction of Buddhist temples all across Japan. He believed that by doing so, the Buddha will show his mercy and help protect the land and its people. The populace then worked together and started the construction of the Daibutsu (Giant Buddha) and it was completed in the year 751.

3. Secure your Place in Heaven

If you visit Todaji Temple, you’ll notice that one of the wooden pillars near the entrance has a hole in it. Legend has it that anyone who is able to pass through the hole in the pillar is guaranteed to have a place in Heaven. Because of this, the place is often crowded with people who are intent of passing through the hole, while striking poses for the cameras.

Whenever you enter temples and shrines in Japan, there is an etiquette that must be properly observed. In every temple and shrine, you’ll often find wooden ladles on which you can scoop up water to cleanse your hands and mouth. This must be done with the intention to wash away all the impurities in your body, before you enter the temple or shrine. This purification ritual is often neglected especially by foreigners who are not aware of the local customs in Japan.

5. Famous Guardians of the Nandaimon Gate

Aside from the Giant Buddha Statue, the Nandaimon Gate, and its Guardians are listed as National Treasures of Japan. These two benevolent kings who were sculpted during the 12th century by the famous sculptors Unkei and Kaikei are also called “Nio” or “Kongorikishi”. They are the guardians of the Buddha and are often found on the gates of many Buddhist temples in Asia.

Buying souvenirs have been a custom for people who likes to travel. For some people, this is the proof that they had visited the place and to others, it is a gift that they can share with their family and friends back home. One of the great things about souvenirs is their exclusivity. Getting a souvenir that is not found anywhere else, is bound to make anyone happy.

Nara is one of the few places in Japan where you can find deer that freely roam the area.  The Japanese believe that deer are a messenger of the Gods and allows them to do as they please. Visiting Todaji Temple won’t be complete without interacting with the deer. They are quite tame and would even allow people to pet them. If you like to feed the deer, there are feeds that are sold in the temple that are made especially for them.

Have a Good Trip and Travel!

7 Hostels You Must Stay in Nara