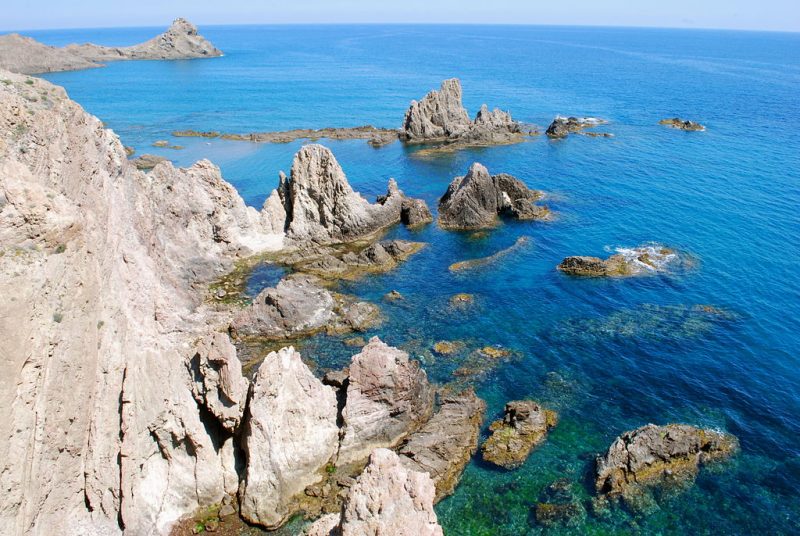 Arrecife is a small but equally pleasant port city with a Mediterranean-promenade, an urban layout, and an appealing white-sandy beach. It’s the capital of Lanzarote and the city owes its name to the volcanic rock reef that covers the beach. This beautiful port city is packed with historic buildings, elegant boutiques, numerous sights, and a great selection of bars and restaurants to enjoy your stay to the fullest. Well, there’s more to Arrecife than meets the eye, with a never-ending list of things to do. 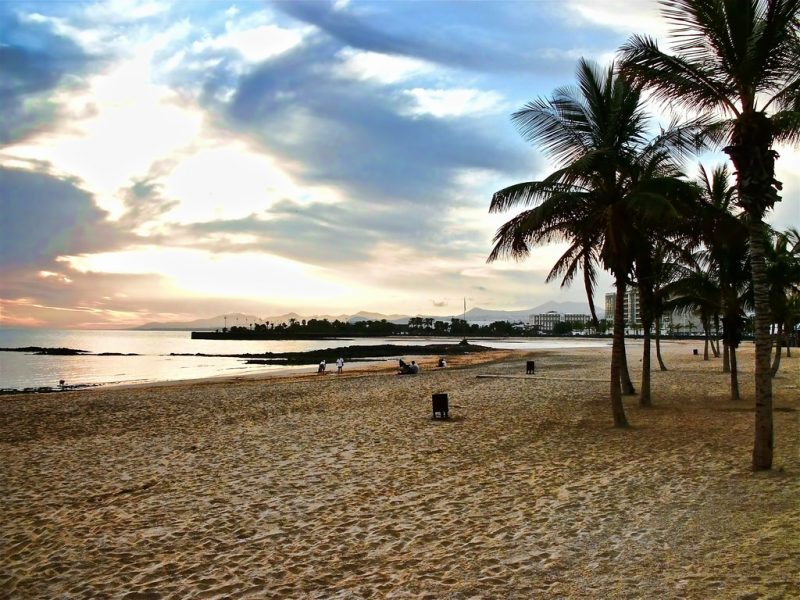 The magnificent seafront promenade runs along the capital of Lanzarote’s stunning coastline (Arrecife means ‘reef’ in Spanish) providing a stunning backdrop to the beauty of the Canary Islands. An abundance of seabirds nests in the area. Visitors who prefer water sports can enjoy windsurfing, sailing or snorkeling all year round. 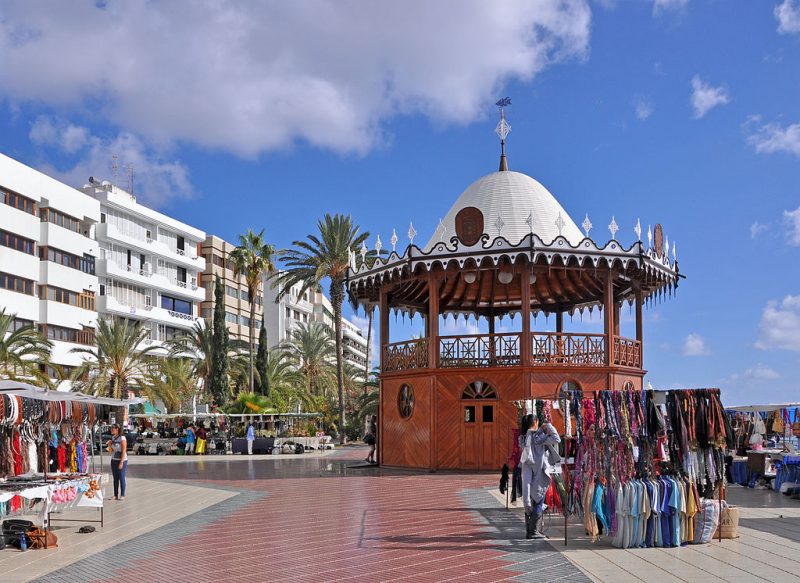 There’s plenty to see beyond the beautiful seafront, including the sparkling city of Arrecife and its vibrant, colorful streets that are easily accessible from the port. The city has an abundance of characterful restaurants and hotels, small cafes, along with plenty of boutique shops – altogether there’s a great atmosphere around Arrecife.

The strategic location of the capital city is ideal, which means it’s easily accessible from any point on Lanzarote. To the northern end of the island is the municipal district of Haria, a small but beautiful urban center sits on the hills of a fertile valley. To the south are the towns of San Bartolomé, a small farming community nestled along the coast Lanzarote between Arrecife and Tias; Tinajo, a small tourist center offering stunning scenery, picturesque villages and the island’s biggest annual fiesta; and Yaiza, a pretty town packed with volcanic surroundings.

The best views of the Timanfaya National Park are from the top of volcano Caldera Blanca. … https://t.co/eL6XLlb4FN pic.twitter.com/x3AtpiFY4o

The south tour takes you to a bit scary, yet thrilling lava fields and volcanoes of the Timanfaya National Park. The Fire Mountains form a broad area that’s severely affected by the volcanic eruptions that struck the island in the 18th century, which ultimately altered the morphology of the island in a significant way, leaving almost a quarter of the remains buried under a fine layer of lava and ash. The route itself offers the best scenery of the park showcasing all the different colors and textures of the lava flows.

5. The Fortress of the Modern Art

If you’re a history buff, then the Museo Internacional de Arte Contemporáneo Castillo de San José (International Museum of Modern Art) is well worth your time. This beautiful museum showcases the modern art collected from the 1950’s all through to the 1970’s, including several masterpieces from Manrique himself. Ideally located in the 18th-century fortress called San José Castle, the museum is now home to creations by internationally acclaimed artists.

At the heart of Arrecife, lies the magnificent El Charco de San Gines, a small seawater lagoon surrounded by a promenade accompanied by colorful boats and the resident seagulls. There’s a mix of modern apartments and historic buildings surrounding El Charco, most of which are still in ruins.

The Museo de Historia de Arrecife is a small history museum just off the seafront promenade, based in the centuries-old Castillo de San Gabriel. The museum exhibits include information on the island’s flora and fauna, and its geology as well as pre-Hispanic military equipment. The best part – it offers a lovely panoramic view of the seafront promenade.

8. A Romantic Walk on the Beach

Felt like going for a quiet, romantic beach walk with your significant other? Playa del Reducto is your best bet, if you seek a tranquil atmosphere in the middle of Arrecife, adorned with lofty palm trees and a beautiful promenade. There’s plenty of space, and the beach is reasonably clean and the water is clear. 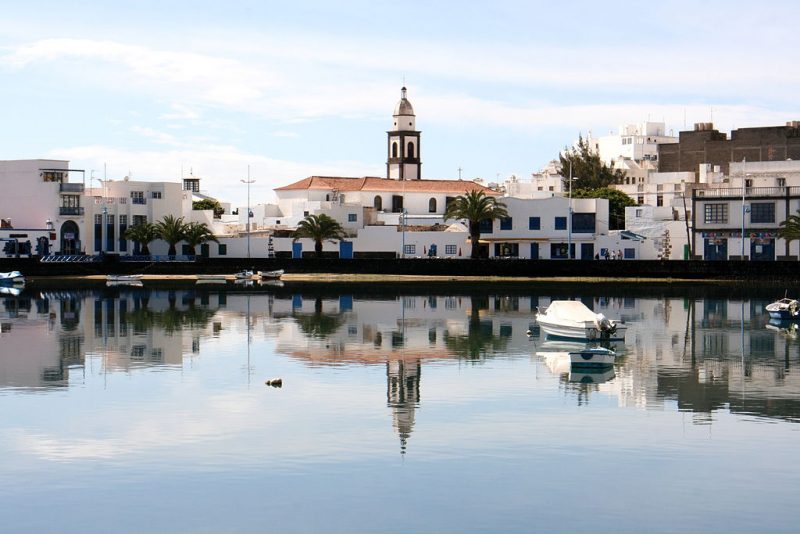 San Ginés, a quiet, nice little church tucked away from the main shopping area, is a tribute to the island’s patron saint, San Ginés who originated in Cuba. It’s an interesting historic landmark to the island that appears far modern than the constructions suggests, which is built of dark whitewashed volcanic stones.

10. Shipwreck in the Sea

Barco Telamon encallado is an eye sore in the sea, which rests in a small bay up the coast north of Arrecife which has been there for decades. Its unusual location makes for an ideal photographic setting and you’re sure to catch some good shots at the sunset. This is a perfect spot for the divers.

@chrisr56 today enjoying Arrecife's market. If only GH had this weather pic.twitter.com/qFXO9LeKAR

A small but nice food market at the entry point to the new Marina, which serves everything that smells good from homemade bread and jams to fresh fruits and veggies. You can sample a wide variety of food on offer and test samples before buying, and everyone can buy whatever they want. A haven for the foodies.

The beach at Arrecife pic.twitter.com/8Iwi5E9VVs

If the numerous sights around the port city of Arrecife couldn’t fascinate you enough, the bustling nightlife will do the job just perfectly. Arrecife is your ticket if you’re on a holiday on the island and want to get familiarize with the people on the island and what’s the best way to do that than to hang out where the locals like to hang out. Ococo is just your kind of place with everything from sports screens to pool tables.

Arrecife is undoubtedly the largest shopping center in Lanzarote and the main shopping street is the Real Street, which is a shopper’s delight. Entering the busy street itself is fun and the many stores and shops here are sure to satisfy all your wishes. Also known as Leon y Castillo, there is more on offer in the shopping street such as designer clothes, fashion accessories and apparels from the renowned brands, craft products, gift items and much more.

Arrecife continues to wow with a wide range of ocean-facing restaurants and specialized diners that serve all kinds of decadent dishes providing the best dining experience. The port city is perfect for local flavors like tapas and montaditos. There are numerous gastronomic delights to choose from, when it comes to dining at Arrecife.

The quiet, beautiful port city of Arrecife with amazing landscaped areas and some fine examples of island’s modern, protected architecture combined with a world-class shopping scene and an exquisite dining experience, is definitely a must-have on your checklist.

10 Things To Do in Teguise: Spain