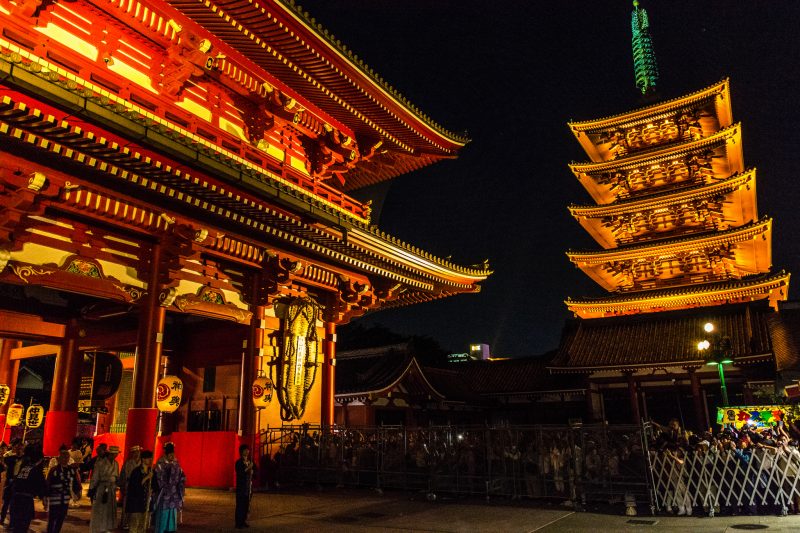 The Japanese word for festival is “Matsuri” and they are usually supported by a shrine or a temple. There are many festivals throughout Japan, some are historical and rooted in Chinese festivals. Other festivals have undergone many changes so that they only share the name and date with the original festival. Nevertheless, Japan’s festivals are vibrant and fun. Check out these 30 festivals you won’t want to miss!

Perhaps one of the most well known festivals in Japan is the Gion Matsuri in Kyoto. The festival occurs during the summer in July. It usually lasts for one month, but the main attraction is the floats, “Yamaboko Junko”, which takes place on the 17th and 24th. This occurs on the Kawaramachi and Oike Streets.

The Awa Odori Festival is one of the biggest festivals as it attracts close to 1.3 million tourists every year. It happens from August 12 to 15 on Tokushima. It is a city-wide dance party and is extremely exciting. The dancers wear colorful costumes and dance while musicians play their shamisens and gongs. There are many types of traditional dances for both men and women.

The Asakusa Samba Matsuri is an international festival that occurs in Tokyo at the end of August every year. It is a celebration of the close ties between Japan and Brazil. Many samba teams perform their dances and in addition, the winners of the Carnival in Rio de Janeiro also does a performance at the festival.

The Kanda Matsuri is a famous festival in Tokyo that occurs in the middle of May. It is a festival that celebrates the Kanda Myojin Shrine. Each shrine, called Mikoshi, is held by about one thousand people. They leave the Myojin Shrine in the morning and then they through the Kanda district during the day. They then return to the shrine at night time.

Japan loves their dance festivals and the Yosakoi Soran Matsuri is Japan’s largest. It happens in early June and there are about 350 teams and 1 million people in the audience. Come and join as a dancer or watch some truly original routines!

If you happen to find yourself in Japan during the winter time, don’t miss out on Sapporo’s Snow Festival in February. The festival began back in 1950 with just a group of local high school students who built six snow statues. Today, the festival is a huge contest of snow and ice sculptures that attract people from all over the world.

Kanto Matsuri occurs from August 3 to August 6 in Akita city. In this unique festival, people balance huge 40 foot lantern poles on their hands and foreheads. When you think about how these poles weight about 130 pounds, it’s really a spectacular sight!

This festival occurs from August 2 to August 7 at Aomori City. It is a huge festival that features extravagant lanterns of humans along with thousands of dancers. The parade usually begins at sunset and then goes on for many hours.

The Tenjin Matsuri Festival occurs in Osaka from July 24 to July 25. It is a two day festival where 100 boats are filled with people dressed in ancient costumes of the imperial court. At night, there is a large bonfire that happens on the boat. This is a very old festival, and the bonfire tradition came about as a way to light up waterways for river patrols.

One of Kyoto’s oldest festivals is the Aoi Matsuri. It is more than 1200 years old. There are many attractions, but the main one is the hour long parade of participants dressed in ancient Japanese fashions. The festival is a way to honor the Kamo gods, who are in charge of thunder and the weather.

This festival occurs in Kishiwada City, Osaka during September. The Danjiri is a wooden float, which is pulled by many teams. It is one of the most exciting festivals in Japan as people hop in and out of the Danjiri and people dance on top of the wooden floats.

The Kochi Yosakoi festival happens in the middle of August. It began in 1954 when the people of Kochi made up the Yosakoi Naruko dance. It is based on an old song called “Yosakoi Bushi.” The people dance while they use clappers, which are called “Naruko” which make a clapping sound.

The Tanabata Matsuri happens in Sendai City, Miyagi from August 6th to 8th. The festival dates back to a Chinese legend that involves the two stars, Altair and Vega. The festival involves thousands of beautiful and colorful paper lantern decorations which adorn the streets.

The Hakata Dontaku Matsuri takes place in Fukuoka City on May 3rd to 4th. Participants dance through the streets with a “Shamoji” which is a wooden utensil that is used to serve rice. It is one of the most popular festivals in Japan which sometimes has an audience of 2 million people.

This is a harvest festival that happens on Shikoku Island. There are 47 teams of about 150 men that carry floats that are shaped like taiko drums. The main attraction of the festival is when the teams have float fighting. This is when they bounce the floats up and down in a competition.

This festival occurs in Late August at Nagoya. It is a dance festival that includes 200 teams and more than 15,000 dancers from all over the country. Each team does a local traditional dance and the festival draws more than 2 million people.

This festival occurs in Tokyo and is the largest Yosakoi dance festival with more than 5,000 dancers. This festival is a competition between all the Yosakoi dance teams and are sponsored by colleges and universities in the area. Yosakoi is a type of dance that combines all the traditional dances of Japan. It was created in Kochi in 1954.

This festival takes place over two days in Chichibu City. The main feature of the festival is when participants race large lit lantern floats up a steep hill. While this can sometimes be dangerous, it draws a huge crowd as they cheer and chant for the race.

The Japanese word for setting a mountain on fire is “yamayaki.” There is a cultural love for fire in Japan. The Wakakusa Yamayaki is an annual festival where people set Mount Wakakusayama on fire. It happens in Nara and after the fire, there is a fireworks show. The festival happens in January and Yamayaki is actually a practice that happens all over the country of Japan.

Daimonji is another fire festival that happens in Kyoto. It happens when huge kanji characters are burned onto the mountains in a beautiful display. It is a celebration of spirits of their ancestors and a welcoming party as they make their way back to the living. People then light candles and bonfires at the end of the festival as a way to show the ancestor’s departure.

The Jidai Matsuri is a festival that takes place on October 22 in Kyoto. It is a huge historical reenactment parade where participants dress up in traditional clothing. People wear authentic costumes from the Heian-era as emperors, shoguns, samurai and famous military people.

This beautiful and illuminating festival happens in February 5 to 14 in Otaru. It happens at the same time as the Sapporo Yuki Matsuri, but is no less magical when all of the snow lanterns are lit and the snow statues are placed around the city.

This festival happens in August and lasts for 3 days in Morioka. It is a large taiko drum festival and showcases 10,000 drummers and dancers. They have a large parade and they go through Morioka.

This festival is known for being Tokyo’s wildest festival with its rowdy and huge crowds. The festival showcases mikoshi parades and dancing. It even features rare performances from Tokyo’s geisha. If you’re lucky, you might be able to see them.

Those of you interested in crafts might be excited to learn about the Toka Ebisu Festival. It occurs in January in Osaka for 2 days. Close to one million people go to the Imamiya Ebisu Shrine in Osaka to get Fukusasa, which are bamboo branches that are decorated with maneki cats. The shrine calls upon many Miko to come and craft the Fukusasa.

This festival honors foxes as they are sometimes known as Shinto gods. In Japanese legend, foxes shape shift into human form and play tricks on people. The Shinkawa Market Festival is a recreation of a fox wedding.

Omizutori is a festival that occurs in Nara and is a 14 day spring festival in March. The festival involves people lighting giant torches at Todaiji Temple. This temple has the biggest historical wooden building in the entire world.

The Nagasaki Lantern Matsuri is a Chinese New Year celebration that occurs in Nagasaki, Kyushu. There are 20,000 lanterns that adorn the city at festival time. There are many Chinese performances that happen during the festival.

The Fukagawa Hachiman Festival is a mikoshi festival that happens in late August in Tokyo. There are 50 mikoshis that go around the Fukagawa neighborhood. What is fun is that people throw water on the mikoshi at each other and it turns into a giant water fight. The local fire department also gets involved and sprays the crowds with a fire hose.

The Sanno Matsuri is a well known festival in Tokyo and takes place in mid-June. The main attraction involves 500 participants in a parade and goes through 25 kilometers in Tokyo. It was at one point the largest festival in Japan and even the shogun went to the festivals.

From traditional to dance festivals, Japan is full of vibrant and fun for all. If you’re lucky enough, you might be a participant in one of these festivals!

Top 15 Where and What to Buy in Ginza: Tokyo

15 Things To See For Your Nightlife in Shinjuku

Best 10 Things To Do in Hokkaido: Japan