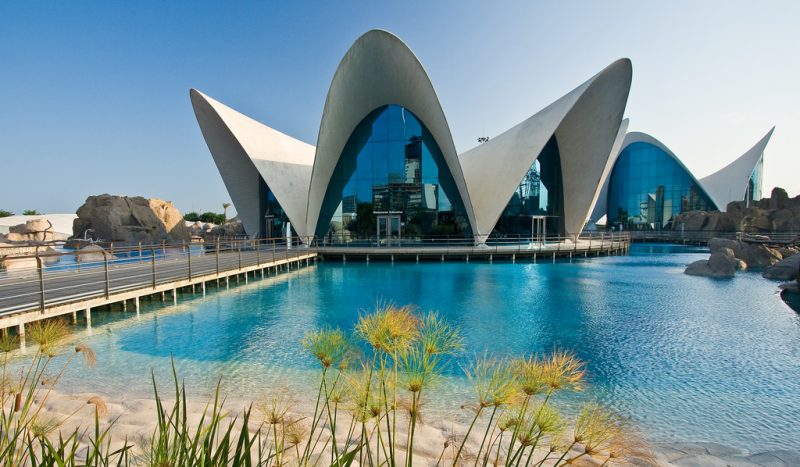 Valencia is known for the unique architecture of their museum and ancient cathedrals. However, there are also modern structures that you can visit and enjoy. One of these modern structures is the L’Oceanografic or the Aquarium in Valencia, Spain, which opened on February 14 of 2003. Here are the 10 things that you should know about this particular Aquarium.

The design of the structure was made by the architect Felix Candela. He also had some help from Carlos Lazaro and Alberto Domingo who are both structural engineers. The whole area is divided into 10 great sections which usually are referring to the different marine areas. Aside from these sections, there are also restaurants and shops that you can go to in order to eat or buy souvenirs. There are also offices in this place, such as the Education and Research building. The water that are present in the aquarium is pumped from the La Malva-Rosa beach. The necessary requirements for this scenario has been passed.

The sections that you can visit include the Upper Shore, the Mid Shore, the Touching Pool and others. Aside from that, there are also exhibitions of various marine animals such as the Arctic exhibitions where walruses and beluga whales are present, the Atlantic exhibitions which stars Humboldt penguins, the Islands where you can see several colonies of Patagonian sea lions, and the exhibition of seals that take place in the Temperate and Tropical section.

There are many types of marine animals that can be found in the Aquarium. The total number of animals that are present in the place is about 45,000. Such animals belong to about 500 various kinds species. These species include beluga whales, sharks, dolphins, penguins, walruses, sea lions, sea turtles, fish, reptiles, and even fish, among others. The nine underwater towers in the Aquarium are the habitats of these animals.

If you want to just relax, you can go to the Dolphinarium Exhibition where you can look at some dolphins perform activities that showcase their intelligence and abilities. The seating capacity of the said dolphinarium is about 2,210 individuals. There is also a pool where you can find mules dolphins. The exhibition starts at various times so you have to check with the Information Desk with regards to the timetable.

There is also an underwater auditorium which resembles the Red Sea. This area is a large room with a roof that takes the shape of a pilgrim shell. The seating capacity of the Red Sea Underwater Auditorium is about 440 people. Aside from just being able to sit there, you can also watch how the animals that live inside the auditorium are fed by several divers.

There is also an underwater restaurant where you can eat a wide variety of foods, especially the delicacies of Valencia, when you feel hungry from all the sights that you have visited within the complex. The shape of the roof of this building got its inspiration from a lily. This restaurant has two floors. A grand aquarium surrounds the lower floor while the upper floor is designed like an island located at the middle of a big lake. Oceans Restaurant and La Jonja Restaurant are also open for service.

The prices of the tickets for admission to the Aquarium varies depending on the age and number of individuals. Ticket prices for adults are 27.90 euros while those reduced tickets are 21 euros. The prices for school groups as well as adult groups are 12.55 euros and 18.65 euros, respectively. There is also a 15% discount that can be applied to individual adult fee for those who have a youth and student card.

Reduced tickets are bought for children who are 4 up to 12 years of age. Children aged 0 to 3 years can avail of free admission. A reduced ticket can also be brought by a person over 65 years or a retiree or a disabled as long as supporting documents have been presented. For a school group ticket, a minimum of 15 regulated education students should be present. As for the adult group ticket, the group should have a minimum of 20 persons.

The Aquarium in Valencia or L’Oceanografic does not only provide you with entertainment or leisure. It also allows you to learn and discover the marine life. It makes one realize how beautiful it is to conserve biodiversity not only on land but also in different bodies of water.