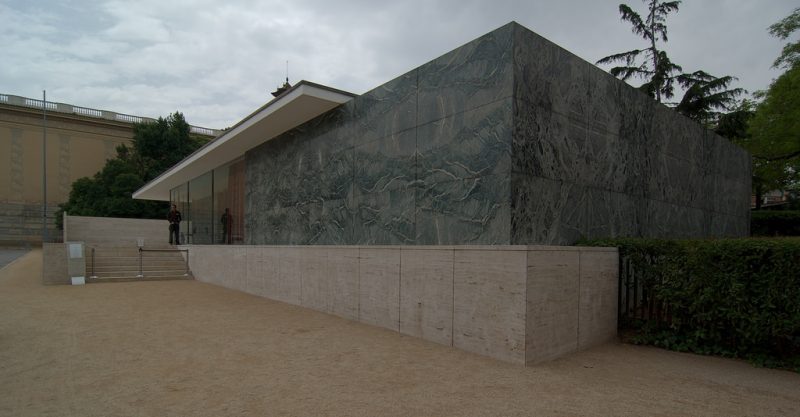 Source: Ben Miller
If you have never heard of Barcelona pavilion, this should be your primary reason for visiting Barcelona. Barcelona pavilion is a founding symbol or modern architecture, for many, it is the most important building in Barcelona. If you could see it like the person who saw it when it was constructed in 1929; the building was completely unique and started a new architectural movement. Here I will take you through the things you need to know about the museum.

1. History of the Pavilion

When visiting the pavilion, what you will witness is a reconstructed building not the original. The building was rebuilt so scrupulously to a point of interest in itself. It was first constructed because of the Barcelona’s International Exposition in 1929. It was an exposition to showcase examples of architecture from around the globe. The Barcelona chair is the only furniture in the building which was to be the thrones for king and queen of Spain. The other object is the sculpture by George Kolbe also called ‘Morning’. The building was dismantled in 1930 at the end of the exposition and its parts shipped to Germany to be used in other buildings.

Over time the architectural world realized how influential the pavilion was and it was reconstructed in 1980 by the Barcelona city council. The reconstruction began in 1983 and it completed in 1986. 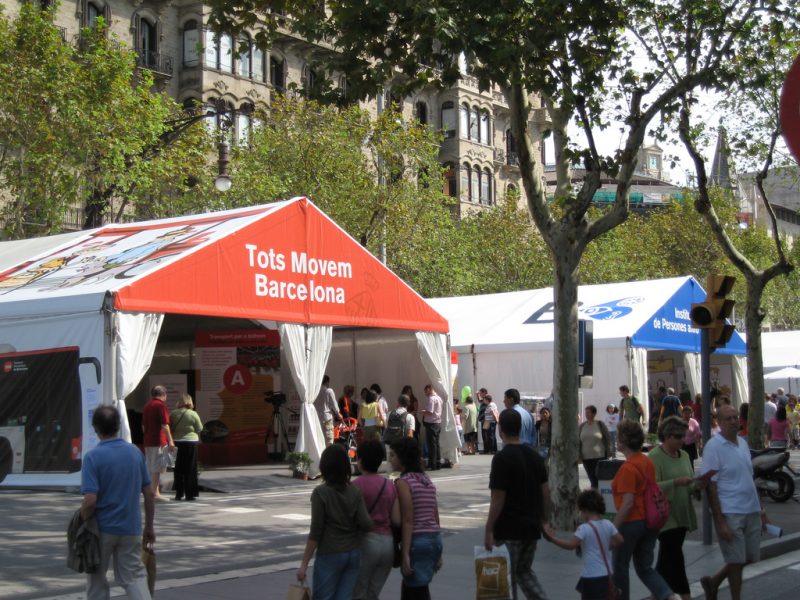 The 1929 Barcelona Universal Exposition also known as 1929 Expo was the second world fair held in Barcelona, the first one was in 1988. It took place in Barcelona, Catalonia, Spain from 20 May 1929 to 15 January 1930. Twenty European nations contributed private organizations from the United States and Japan also contributed as well as Latin American countries.

The exposition was a great deal for urban development and became a testing ground for new architectural styles developed in the early 20 century. 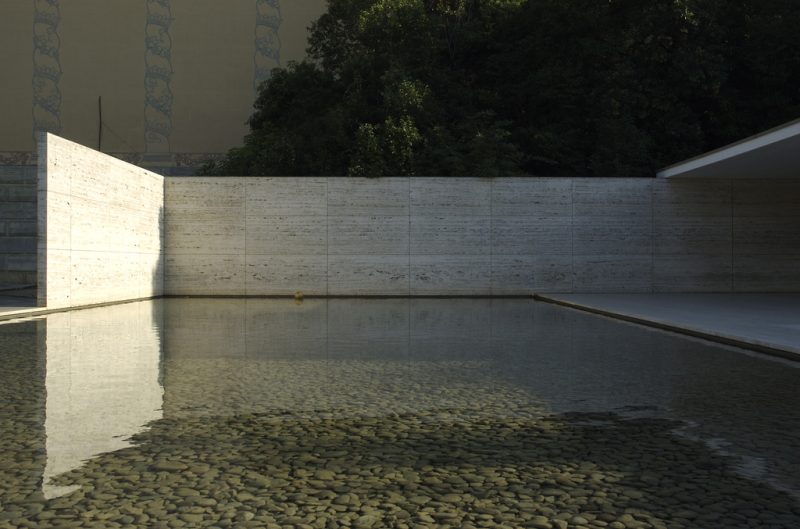 The design was an absolute distinction between structure and enclosure; a standard framework of cruciform steel columns distributed by freely spaced planes. However, the construction was more of a mixture of styles, some of the planes acted a support. The building rests on a southern U-shaped enclosure of travertine that helps in forming a service annex and a big water basin. The floor slabs project out and over the pool while connecting inside and out. There is another U-shaped wall on the opposite side of the site. 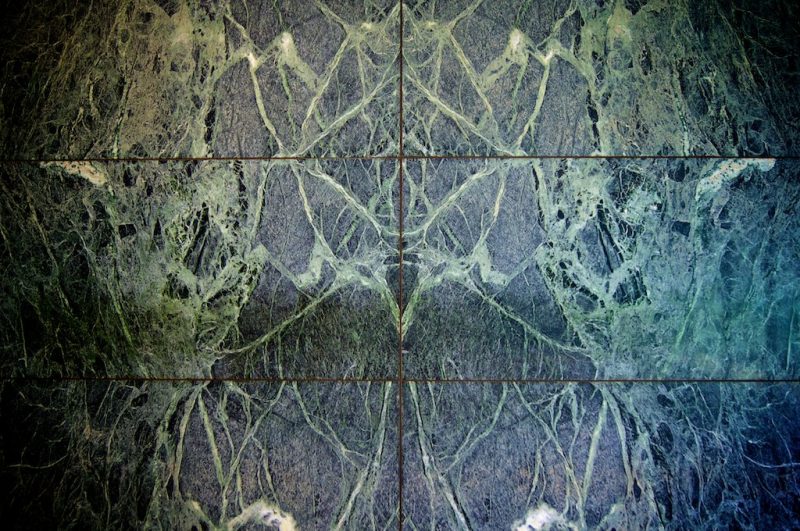 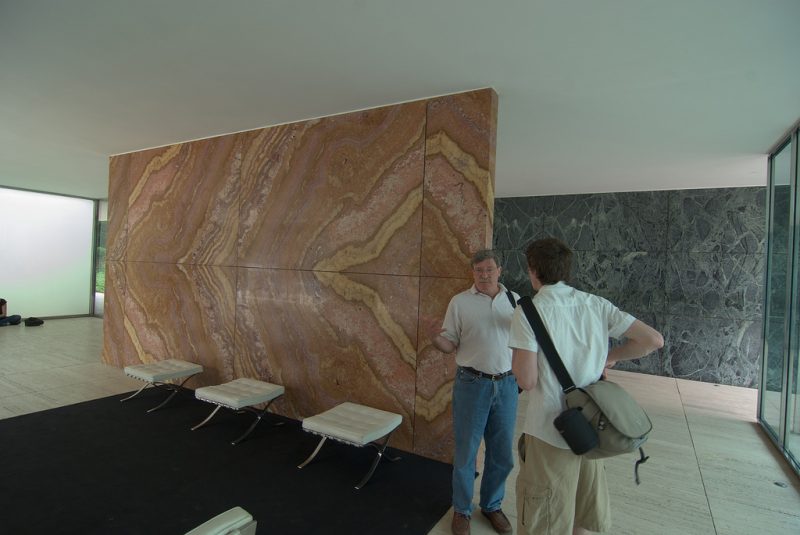 After the Exhibition was closed, the pavilion was demolished in 1930. And with time it became a key point reference not only in Ludwig Mies van der Rohe’s own profession but also in entire 20th-century architecture. Due to the reputation of the pavilion, thoughts turned into action and reconstruction began. Architects like Ignasi de sola-Morales, Fernando Ramos, and Cristian Cirici were designated by Oriol Bohigas who was the head of the Urban Planning Department for the Barcelona City Council in 1980 to start the project. The project began in 1983 and the new pavilion was opened at its original site in 1986.

A foundation was set up when the town council of Barcelona saw fit to reconstruct the pavilion. This non-profit foundation is still in existence promoting architecture. Its main activity is to hold biannual Awards ceremonies for the European Union award for modern Architecture. Those who are selected or nominated give lectures at the Pedrera. 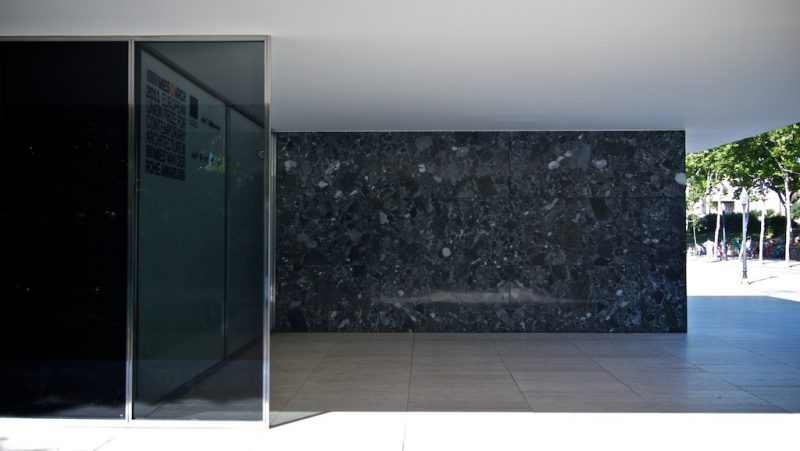 Since the reconstruction of the pavilion, the Ludwig Miea van der Rohe Foundation invited lead architects to temporarily adjust the pavilion. This installation and adjustments were called “interventions” have made the pavilion an opener of debate on architectural ideas and practices. Some of the alterations done are; the addition of spiral acrylic interior walls, refilling of the pools with coffee and milk, revealing of the basement and removing of the glass doors. 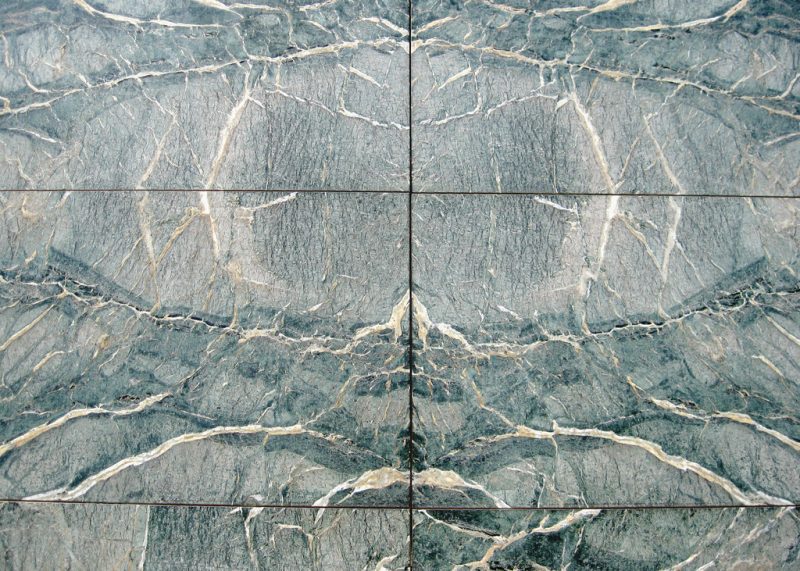 Glass, steel, Roman travertine, ancient green marble, Alpine marble and golden onyx were used to reconstruct the pavilion. They contained the same characteristics and originality as the ones used by Ludwig in 1929. His use of materials lay more on modernity expressed through the knowledge of geometry, the accuracy of the pieces and the precision of their arrangement. 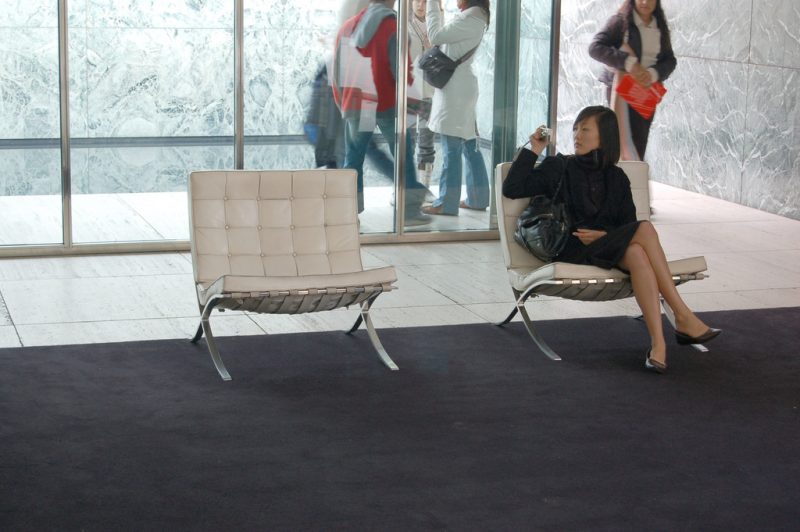 A chair was designed by Ludwig Miea van der Rohe specifically for the pavilion. It is made of the leather upholstered metallic profile. As time goes by the chair has become an icon of modern design in that the Barcelona chair is still being manufactured and marketed today. 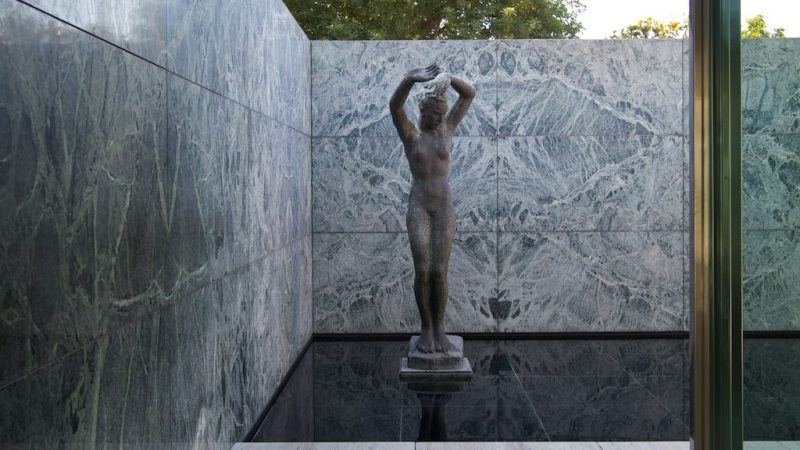 The sculpture is a bronze duplicate of the piece called Dawn by George Kolbe. The sculpture is skillfully placed at the end of the small pond. It is reflected not only in the water but also in the marble glass creating a multiplied sensation in the space.

Temporary exhibitions are organized inside the pavilion by the Ludwig Mies Van Der Rohe. The building is not only used as a gallery for simple exhibitions. Artists are requested by the foundation to pitch ideas in which the pavilion is connected to art. These exhibitions change from time to time. Always check their website for what’s new.

The pavilion offers a good viewpoint to other main attraction buildings in Spain. The Poble Espanyol is an architectural museum in, Barcelona, Spain. It was also built for the 1929 Barcelona Internationa Exposition to exhibit architecture and the culture of Spain. The museum has exhibits on present-day art, houses, streets, theater, parks, school, restaurants and artisan workshops.

15. How to get to the Mies Van Der Rohe Pavilion

The pavilion is located on the right side of Barcelona’s Palace. Take the Metro to Espanya. After alighting the Metro, go up the wide Avenida Reina Maria Cristina towards the palace. Turn right and head to Avenida Marques de Comillas and the pavilion is right in front of you, just opposite the Caixa Forum. The bus stop could be found outside the pavilion.

15 Facts to Know about Barcelona

15 Things to Know about Barcelona Cathedral