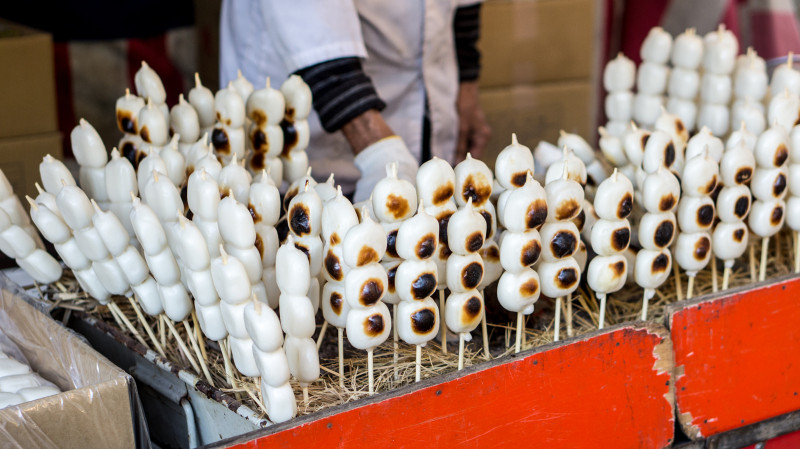 Japan is the heaven for foodies. And the good part is that you don’t have to go to a high class restaurant to enjoy something delicious. Amazing food can be found everywhere…on the street! Yes, this is an article about the wonders of Japanese street food. We’ve made a list of 20 street foods you just have to try!

Soba are thin buckwheat noodles usually served cold with a dipping sauce or as “yakisoba”, which means “fried soba”. For yakisoba, the noodles are fried next to other ingredients like pork pieces, chicken, onions, cabbage, julienned carrots and flavored with a sweet-salty sauce. It is then served with garnishes such as fish flakes, seaweed flakes, sesame seeds or Japanese style pickled ginger. 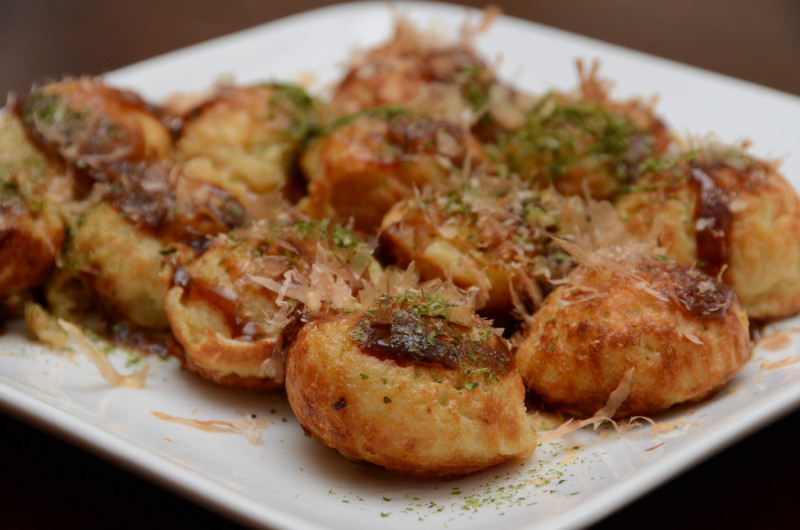 Takoyaki means “fried octopus” and refers to bite size octopus pieces that are battered and then fried in a special pan with round indentations. The snacks are then served with a special sauce (similar to Worcestershire sauce), mayonnaise, seaweed flakes and dried bonito fish flakes. The dish originates from the Kansai area and is particularly popular in Osaka. 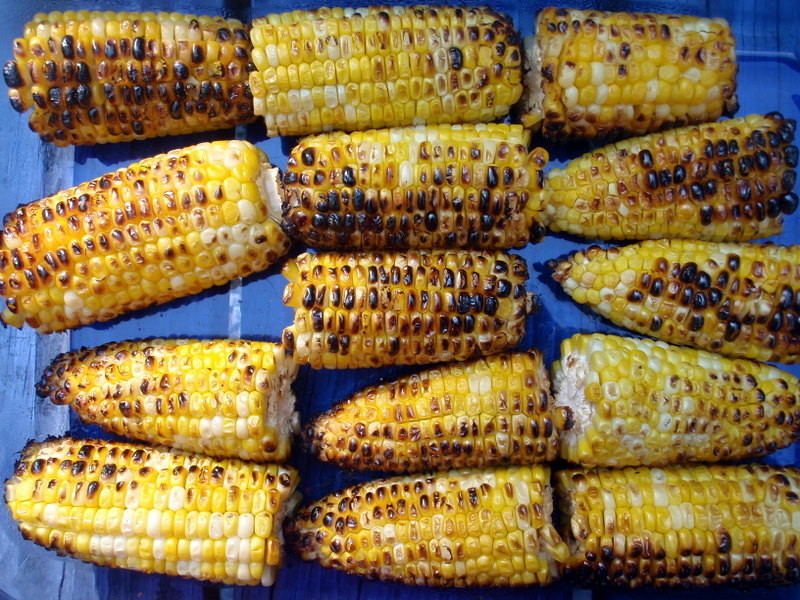 Grilled corn, called “tomorokoshi” in Japanese is an extremely loved street food, always present at summer festivals. The cob is simply grilled over fire and then brushed with a sauce made from mirin and soy sauce. The contrast between the mirin’s sweetness and the soy sauce’s saltiness gives the corn a special flavor.

Ikayaki is a popular street food that refers to grilled squid brushed with soy sauce. The squid can be fully grilled or just parts of it, like the tentacles or sliced rings from its body. Grilled tentacles on sticks are especially popular during festivals. Osaka has a special type of Ikayaki, where the squid is prepared like a pancake. Chopped squid, flour dough and Worcestershire sauce are combined and pressed together. 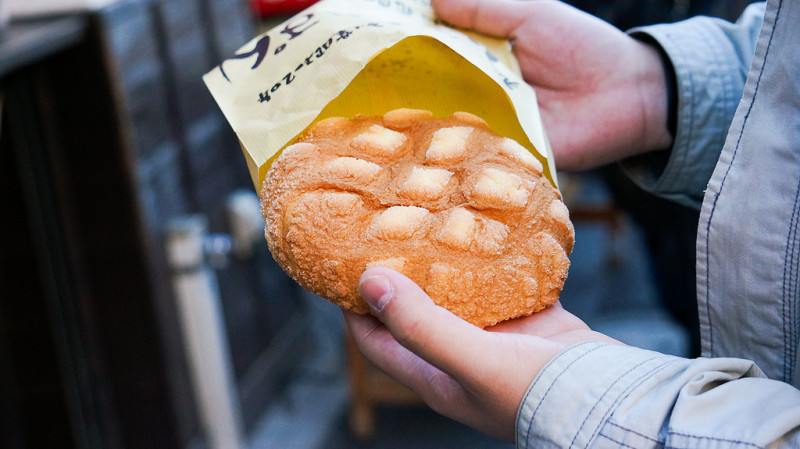 Melonpan is a type of sweet bread which doesn’t necessarily contain melon, but is called so because their appearance is melon-like. The bread has a crispy layer on the outside while soft and fluffy inside. The most popular melonpan is the simple one, but other ingredients can be added, like chocolate, custard, caramel, etc. Little shops selling these flavorful buns can be found everywhere near tourist areas.

Wattame means “cotton candy” in Japanese. Extremely popular with kids, the cotton candy you can find in Japan is not always like the one you know from back home. And we’re not talking only about the taste. Some stalls are have transformed cotton candy making into an art, meaning that this simple sugar dessert is made into various shapes, like flowers, stars, hearts, birds or animals.

Yakiimo are baked sweet potatoes, most often sold in little cars or bicycle trailers on the street. The sellers would drive slowly while screaming “yakiimo~!”, but you don’t have to hear the screams to know that sweet potatoes are being sold in the area – the delicious smell will fill the whole neighborhood! 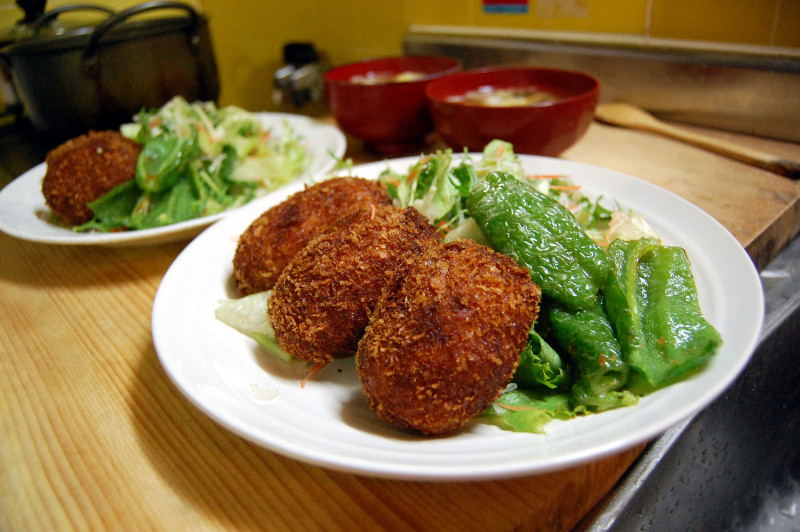 Korokke, meaning “croquettes” are small deep fried patties made from chopped meat, vegetables or seafood with mashed potatoes, flour and milk. The mixture is then flattened and dipped in flour, beaten eggs and Japanese style breadcrumbs. It is often served as a topping over noodles such as ramen and soba, but also eaten as it is. It is a delicious, easy to eat food that can be enjoyed everywhere.

Nikuman are pork filled flour buns that are steamed in a special bamboo basket. The bread part of the buns is soft and tender. The filling is made from minced pork meat and chopped vegetables that are seasoned with different kinds of sauces, such as oyster sauce. Originating from China, it was adapted to fit Japanese people’s tastes. They taste the best when freshly taken out of the steamer.

Dango refers to a sweet dumpling dessert made from rice flour, just like mochi. Three or four dango pieces are usually put on a skewer and served this way. There are different varieties that are eaten depending on the season. Types of dango include ingredients such as red bean paste, green tea, chestnut paste, sweet soy sauce, etc. 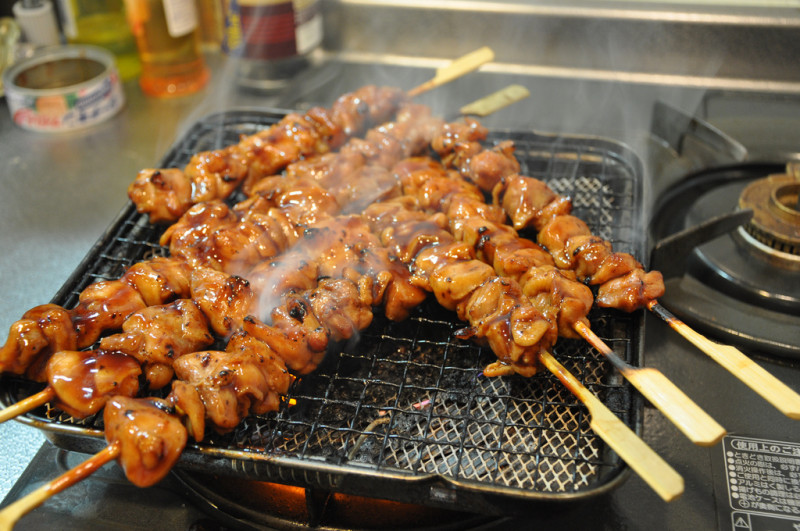 Yakitori are chicken skewers that are grilled over charcoal. Various parts of the chicken can be used for yakitori: the breast, the thighs, the skin and even the cartilages. Sometimes onion pieces are also added to the skewer. There are two types of chicken skewers: seasoned with salt or basted with a sweet-salty sauce made from mirin, soy sauce and sugar. 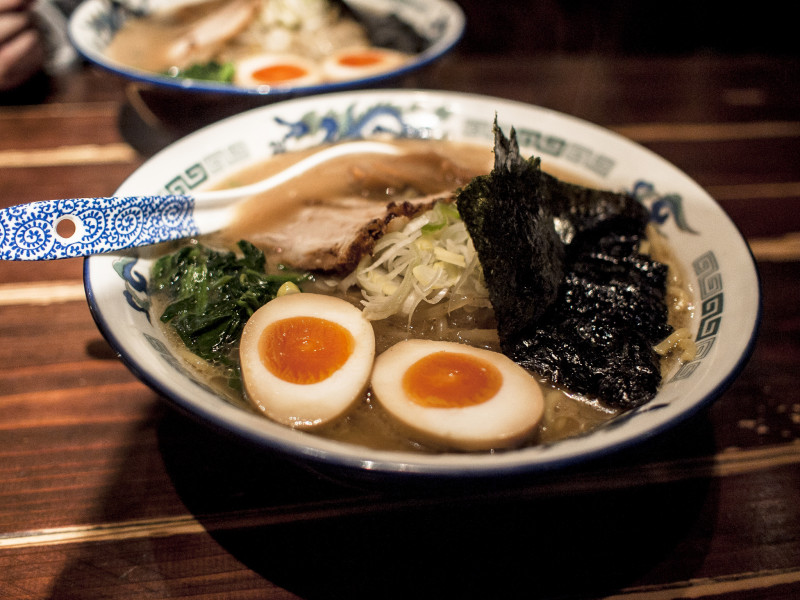 Ramen are wheat noodles served in a hot soup, with toppings such as pork slices, green onions or seaweed. The dish is of Chinese origin, but was modified thorough the centuries to fit the taste of the Japanese. The most popular kind of ramen is shoyu ramen  ( soy sauce flavored ramen ). Most of the regions in Japan have their own varieties of ramen, like tonkotsu ramen in the Kyushu area and miso ramen in Hokkaido. 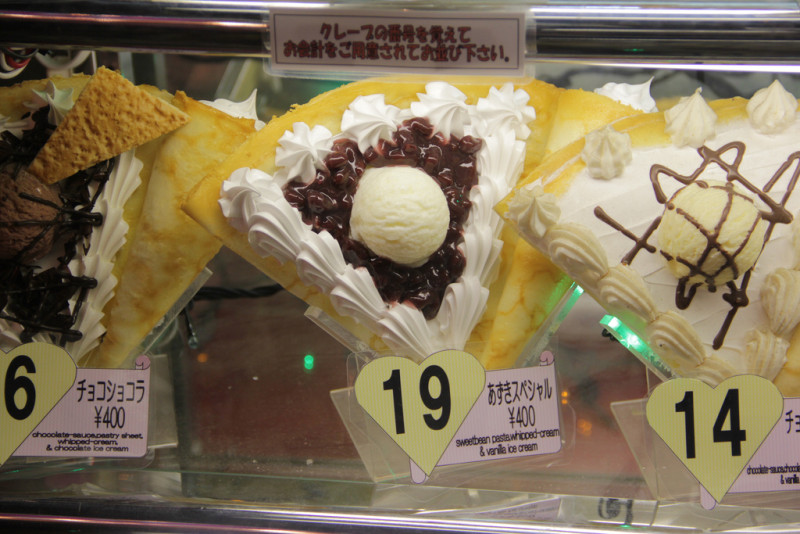 Crepes became a popular street food in Japan recently. The dish was borrowed from France and modified in various ways. The most delicious crepes are said to be sold in Harajuku, Tokyo. Takeshita Street has quite a few shops that sell crepes with a variety of fillings: azuki beans, strawberries, green tea, banana, mochi, nutella, chocolate, whipped cream and others. 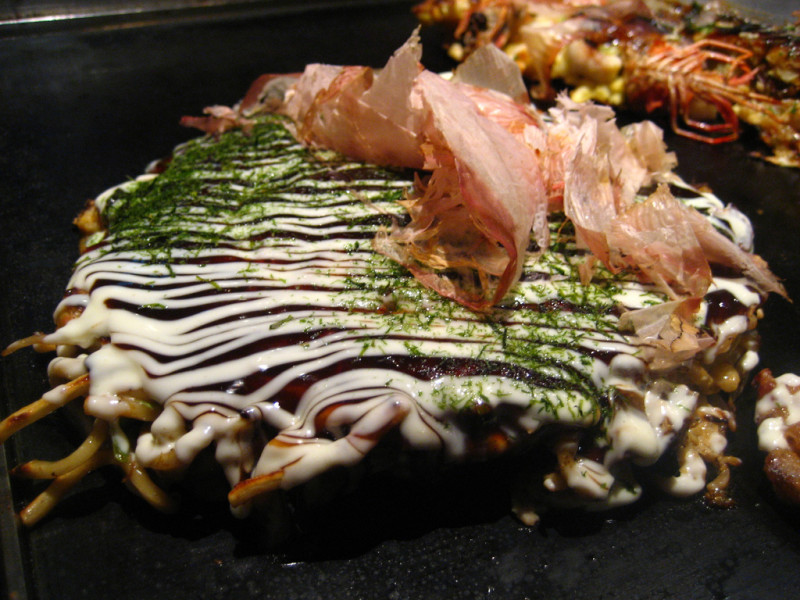 Okonomiyaki is a flavorful Japanese style pancake that can be made from different ingredients, most often cabbage, pickled ginger, potatoes, seafood and meat which are added to a batter made from flour and eggs. The pancake is then fried and topped with mayonnaise, a special okonomiyaki sauce, chopped green onions, bonito flakes and more ginger pickles. It is very popular in Osaka, which is why is called “Osaka’s soul food”. 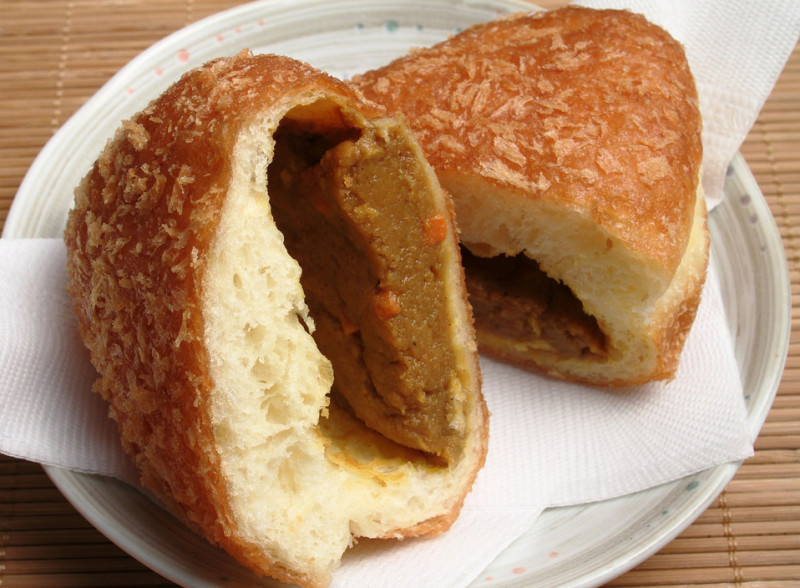 Japanese people like to make small savory breads with all kinds of fillings. One of these is the so called curry bread. A mixture of curry, meat, onions and carrots is wrapped in dough, coated in panko (Japanese style breadcrumbs) and then deep fried or sometimes baked. It is a very fulfilling meal that can be easily eaten anywhere, often found in convenience stores and bakeries. 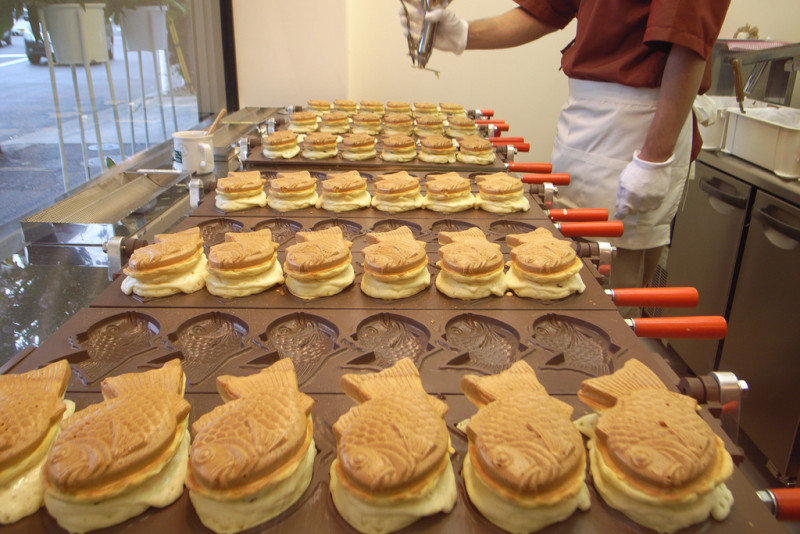 Taiyaki are fish shaped sweet cakes that are often filled with red bean paste. Other fillings include custard, chocolate, vanilla, sweet potato or cheese. Some shops even started making salty taiyaki filled with okonomiyaki or sausage meat. The cakes are made with usual pancake batter that is poured into a special pan that has fish shaped moulds. The filling is then added and the cakes are cooked until golden brown. 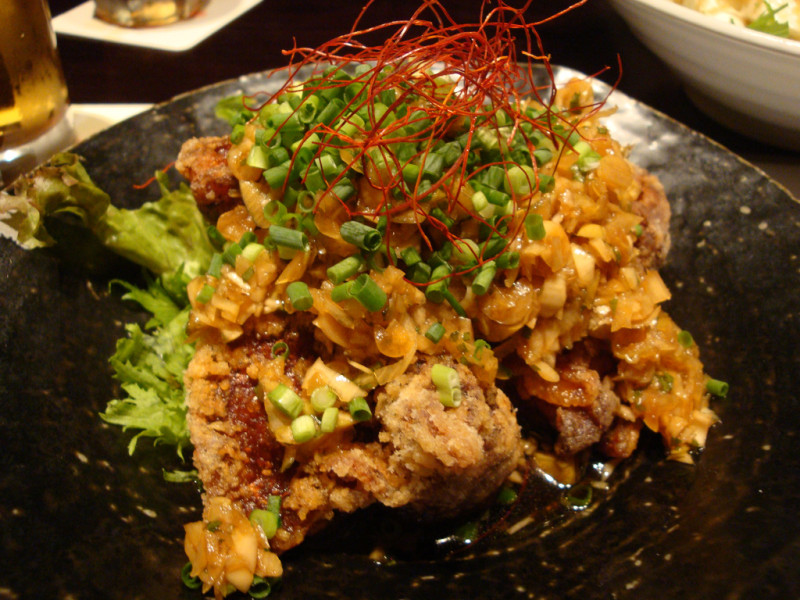 Karaage refers to deep fried chicken thigh. The chicken is first marinated, then dipped in a light coat of flour or corn starch and fried. The exterior becomes crunchy while the chicken inside is soft and chewy. It is a very popular street food that is always sold at any Japanese festival.  The karaage pieces are put into plastic cups and people can eat them while walking and visiting other attractions. 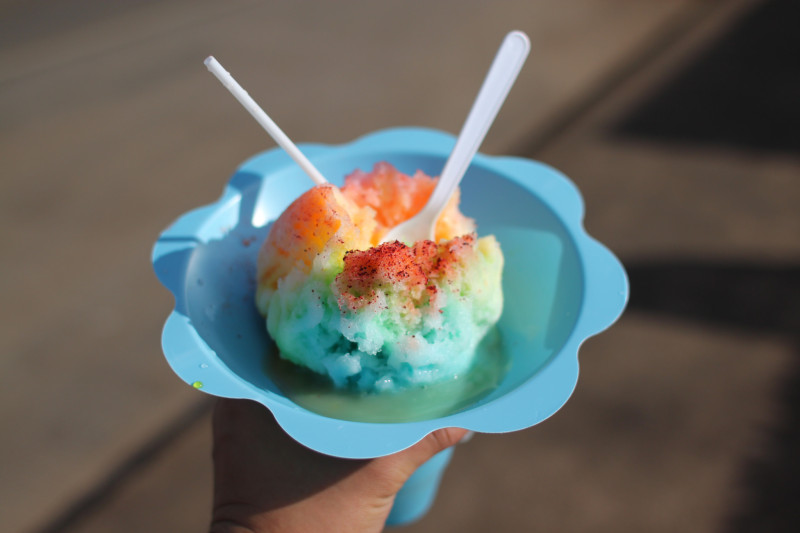 Kakigoori means “shaved ice” and is of course very popular on hot summer days. The ice is crumbled using a special machine or sometimes by hand, and then condensed or evaporated milk is poured over to make the consistency fluffier. Flavorful syrups are added after: cherry, banana, lemon, strawberry, grape, or melon. Some shops add more than one syrup for a colorful effect. Some stores also add ice cream or red bean paste.

Another street food that is popular during summer is represented by cucumbers. As simple and unattractive as it may seem, the Japanese believe that eating cucumbers help you cool down. The cucumbers are impaled with a stick and then miso paste is smeared on them. The result is delicious! 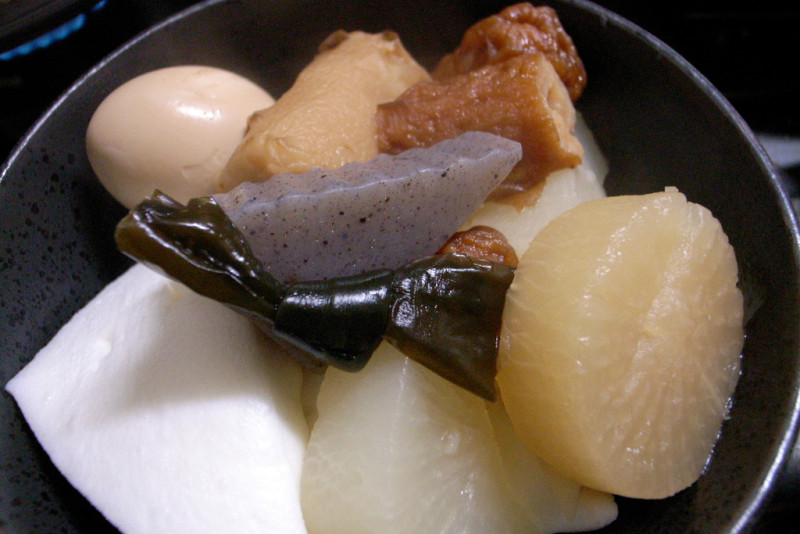 Oden is a traditional winter dish. It consists of several ingredients like boiled eggs, potatoes, tofu, daikon radish, konnyaku and fishcakes boiled in a flavorful borth made from fish stock, mirin and soy sauce. The ingredients and flavors often vary by the region. You can find oden at street food stands, boiling in big recipients. The seller will put your desired ingredients into a plastic bowl and you can let it warm you up! Enjoy these delicious Japanese street foods!

30 Things to Buy in Osaka