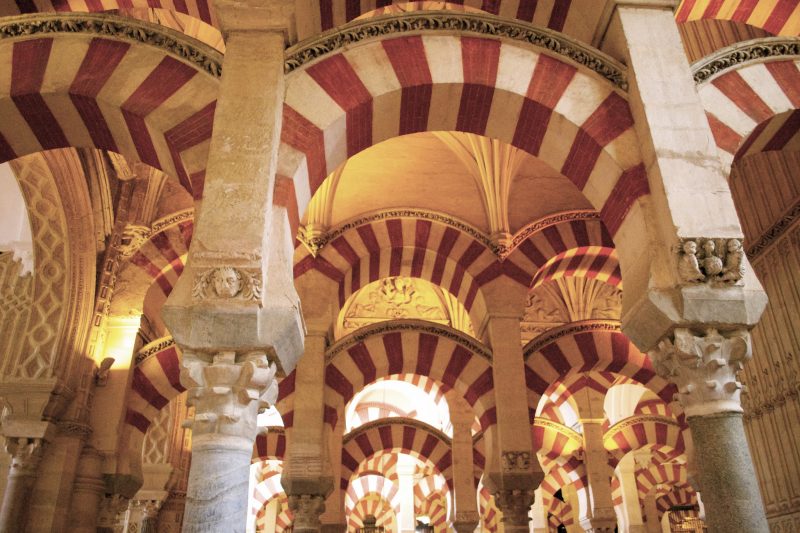 Cordoba Mosque or Mezquita Cathedral is commonly the main reason tourist come to Cordoba. The amazing setting of Cordoba lands makes it a perfect place to see the mosque-cathedral. Basically, it is a mosque inside a Cathedral.

Cordoba Mosque in Spanish is Mezquita-Catedral de Cordoba. The mosque is also known as Cathedral of Our Lady of the Assumption. It has a unique design, infrastructure and deep history that has made the mosque-cathedral a famous destination for tourists.

2. It is one of the oldest structures from 8th Century

The mosque-cathedral has been expanded for over 200 years but then the authenticity of the place still remains intact. The cathedral was really a Catholic church until the exiled Umayyad prince AdbalRahman decided to raise an amazing mosque in which he offered to buy the church and the plot.

3. Historians believed it has been the temple of Roman God, Janus

Many historians believed that the mosque-cathedral has been the temple of the Roman God, Janus. That during the time of christ Cordoba was one of the few Roman cities in which the Muslims invader hordes did not demolish which they think that is was previously called Visigothic Cordoba.

4. The famous and unique Mosque-Cathedral has never been imitated

The mosque-cathedral has a unique dimensions, style and interior elevation which is being reported that a lot has tried to imitate it but no one has been successful at it yet. The whole structure is just so detailed, unique, bold and is a very artistic creation.

5.  Most important and most accomplished monument of all the Western Islamic World

The mosque-cathedral is so unique and sacred that it is considered to be the most important and most accomplished monument in Moorish architecture. Considering the fact that it has been stood up since the 8th Century and no one has ever successfully imitated the structure.

6. The mosque-cathedral has two different areas

The mosque-cathedral has two different areas. One is the courtyard or “arcade sahn” where construction by Abd al-Rahman III is present and the other one is the “haram” which is the praying hall. The whole site is divided into 5 different areas depending on the expansion part.

7. The structure is an amazing creation for both Muslims and Christians

What makes the whole structure amazing is that it is a proof of unity between Christian and Moorish culture considering the fact that both religions preserved the place up until now. It is surely a great experience to be able to see it in person.

If I were you, I would never hesitate to visit this place. Experiencing or seeing a structure from thousands of years ago is quite amazing, and I would love that. Hoping to see you there!

5 Things To Know About Cordoba Airport

Top 15 Hostels to Stay in Cordova