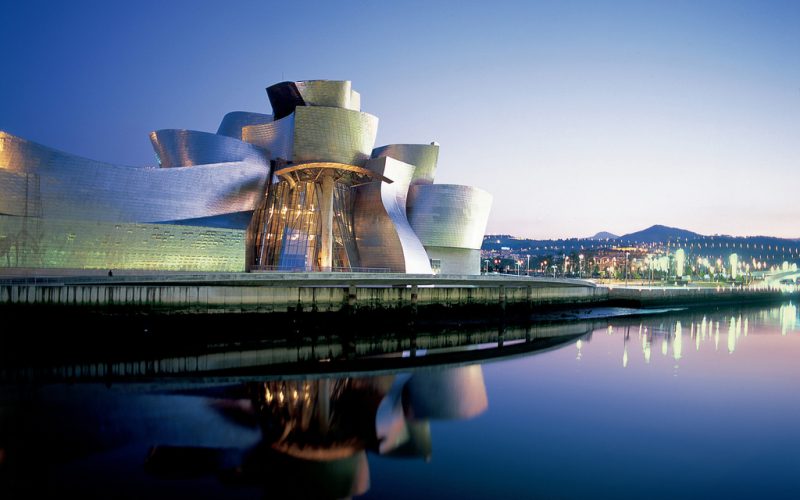 Hailed by expert architects as “one of the most important works completed since 1980”, Spain’s shimmering Bilbao Guggenheim museum is easily one of the country’s most iconic buildings. The building is a tourist attraction in its own right and houses permanent and temporary exhibitions of Spanish and international contemporary art.

The Bilbao Guggenheim Museum is located in central Bilbao, Spain. The building is situated alongside the Nervion River which runs through the centre of the city out to the Cantabrian Sea.

Hailed by expert architects in the 2010 World Architecture Survey as “one of the most important works completed since 1980”, Spain’s shimmering Bilbao Guggenheim museum is easily one of the country’s most iconic buildings. The museum was designed by architect Frank Ghery and is easily one of Bilbao’s most recognised buildings. The building is an example of Deconstructivism, an architectural style characterised by non-rectilinear shapes which distort traditional elements of architecture.

The museum is owned by the Solomon R Guggenheim Foundation and has transformed Bilbao’s port area in to one of the city’s primary sources of income. The Bilbao government paid for the museum’s construction but the museum itself is managed by the Guggenheim Foundation. The Foundation also owns several other museums in New York, Venice and Abu Dhabi and is dedicated to promoting the understanding and appreciation of art.

The museum offers free guided tours to groups of 8 – 20 people. To join a tour sign up at the information desk half an hour before the tour start time.  Tours are held in English, Spanish and Basque.

The museum offers a variety of suggested routes to make the most of your time at the museum from the express 45 minute route to the 5 hour full day at the museum.  The routes cater to different interests. For details of the different routes visit the Guggenheim Museum’s website. 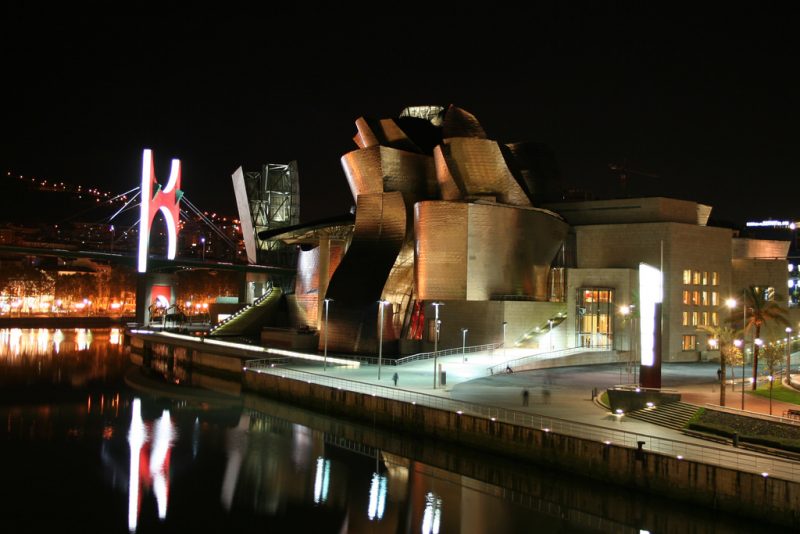 One Friday each month is dedicated to Art After Dark. Visitors can see the museum exhibitions from 10pm to 1am while listening to the music of Spain’s best DJs.

The art at the Guggenheim Bilbao rotates with 5 exhibitions at a time lasting an average of 6 months each. Current exhibitions include Andy Warhol, Lousie Bourgeois and Eija-Liisa Ahtila. Upcoming exhibits include Samuel Taylor-Johnson, Francis Bacon and Albert Oehlen.

The museum is located in the city centre and is easily accessible by public transport.  The museum does not have parking for visitors but there is metered street parking close by as well as underground parking in the nearby Plaza Pio Baroja or Plaza Euskadi car parks.

10 Things to Know about Bilbao Basket

20 Things to Do in Bilbao