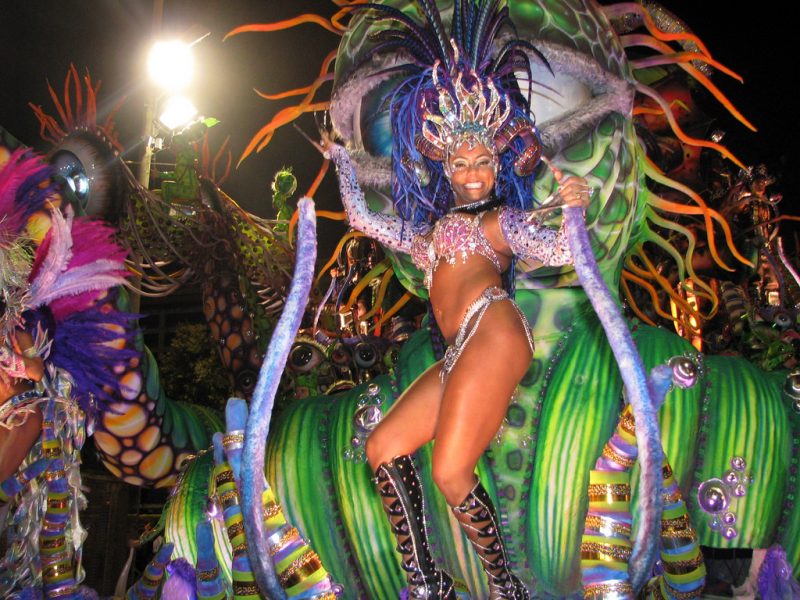 Brazil is famed for its vibrant celebrations that are filled with pomp and color. The exotic dance styles, the beautiful costumes, and the warmth that Brazil has to offer is what lures the throng of tourists that go to Brazil, year in, year out. If you are looking for a fantastic time, then Brazil is the place to be. For music lovers, dancers and the lovers of art alike, this is the place to have intriguing observations and experiences. Art in the form of music and dance is in great abundance here. When asked about Brazil dance, what comes to your mind? Most of you will only think of the sublime Samba Dance. Well, here are some fascinating facts about Brazil Dance. 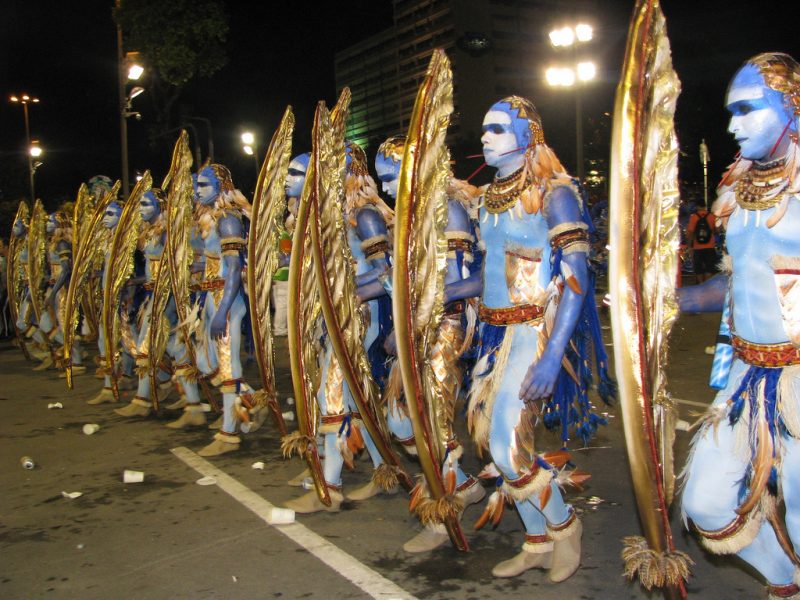 The Brazilian Dance styles are a result of an integration of various cultures and influences. Going down memory lane, you will recall that Brazil was inhabited by people of diverse origins who were brought together by different circumstances. The substantial presence of different cultures led to the coming together of the traditions to bring forth a harmonized and polished Brazil Dance. The influences came from Africa, Portugal, and Amerindians. This is why you will find that it has been difficult to trace back the origin of a particular dance to a specific culture. This integration of cultures made the dance more acceptable to the Brazilians, and that is why you find the dances familiar to diversified cultures that are present in Brazil.

2. It’s not All About Samba 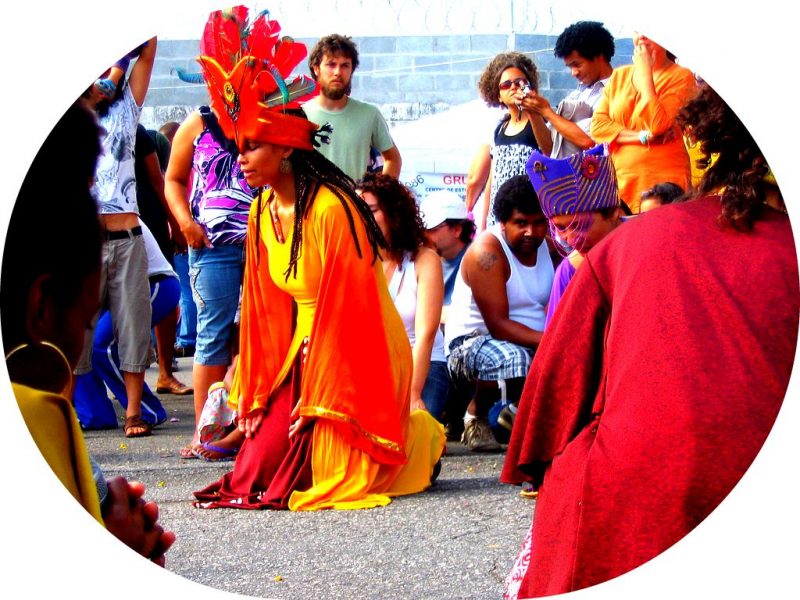 The Samba Dance is a favorite of many. This is what comes first to your mind when you think of Brazil Dance. But there are many genres of dance in Brazil. Each has its unique characteristics, choreography, and allure. Samba is known for its ‘sensual’ nature and is fast spreading and being adopted by the rest of the world. There is the Capoeira Dance, which has some features of martial arts. It involves kicking moves, punches, and sweeps. It is a riveting dance to watch. You will be captivated by the swiftness and agility of the dancers.Bumba Meu Boi is a theatrical dance that tells a tale of a bull that is brought back to life by some magical drums. This is just but to mention a few of the exciting Brazil Dance styles that are there.

3. Use of Musical Instruments 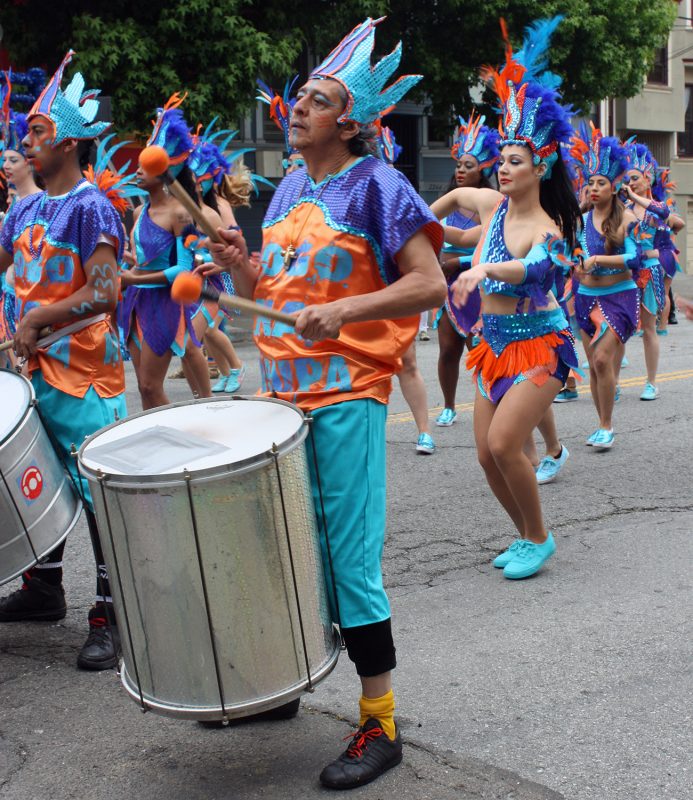 We dance to a beat. The Brazil Dance is also accompanied by music. They use various musical instruments that give the dance life and vivaciousness that is characteristic of Brazil Dance. The tools used is the drum; this is used in may dance styles. There is the use of the Tambourine. This is mainly used in Samba de Roda, which is majorly a dance by women. The guitar is also used at times in some dances and the cavaquinho too. The incorporation of modern musical instruments is an indicator of the evolution that the Brazil dance has gone through over the years. This is also one of the reasons why it has been a bit hard to accredit the styles to a particular culture. 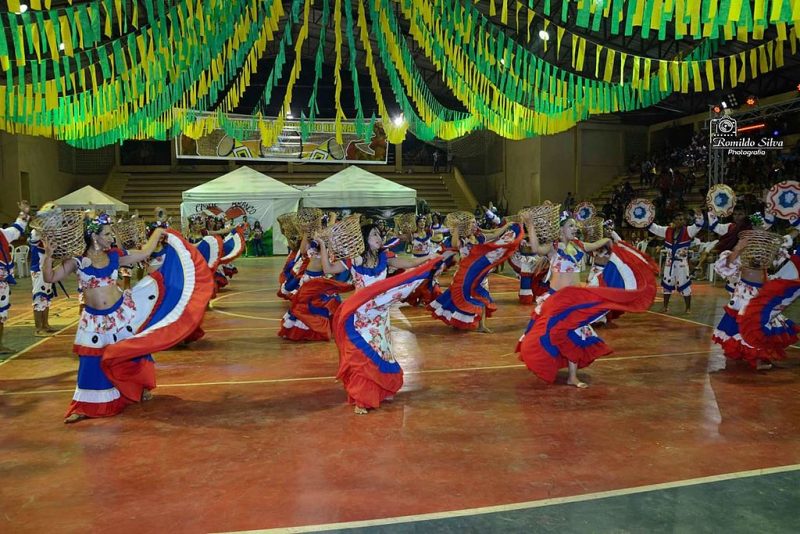 You can’t argue with that. The dance styles have unique characteristics that distinguish one from the rest. Most of the dances involve the feet and the hips. Movement is coordinated in a way to match the rhythm of the music. The choreography ranges from simple to complicated steps. It requires flexibility and ability to synchronize your steps and body movement. They each tell a story and thus speak to the observer. In the Carimbo Dance, women woo men to the dance floor with their systematic steps and a swish of the skirt or handkerchief. Samba dance, on the other hand, is about the lady falling into step with her male counterpart. If you happen to watch a Maculele dance, you will be thrilled by the ease at which the dancers strike their sticks in harmony while at the same time, dancing to the rhythm of the music played. 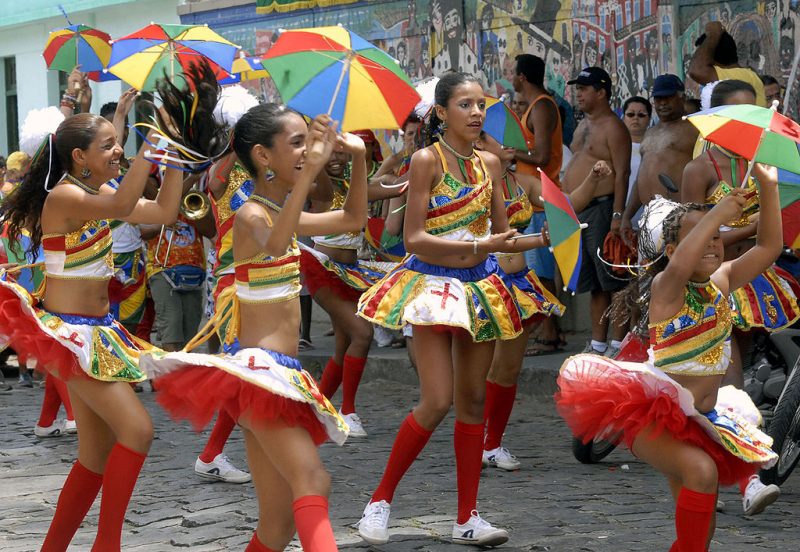 The color is an essential feature of the costumes worn by the dancers. This is used to bring life to the dance together with the music. I mean, you would follow a dance where the dancers are donned in some dull colors. It loses the luster in the dance. If the carnivals were made up of dancers in mundane colors, it wouldn’t have been an epic experience for anyone. The bright and beautiful colors are what bring energy to the dance moves. A flash of color here and there makes it all fascinating. Different costumes are worn in the various dance styles. The Frevo dance which a typical carnival dance is characterized by dancers in flashy colors. The dance requires a lot of energy as it progresses at a slow pace to frenzied movements. 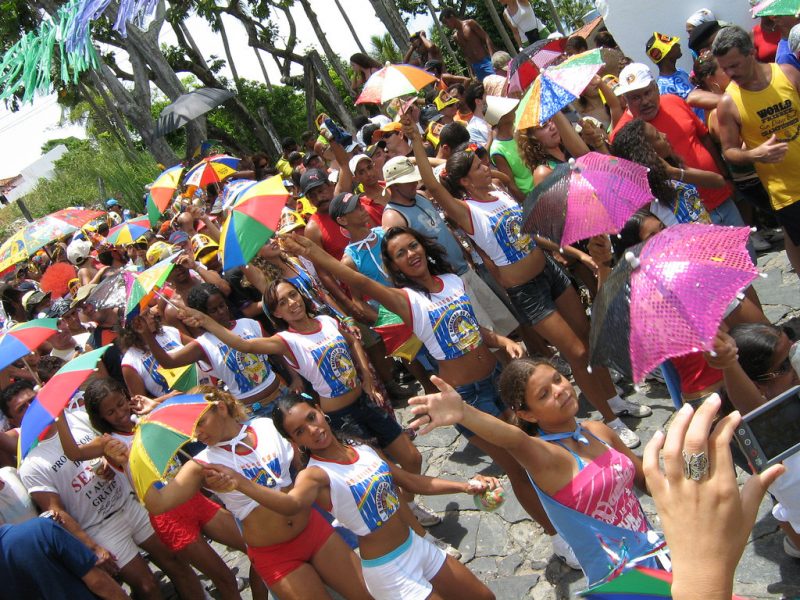 Many of the dance styles are inclusive, in that, there’s room for the audience to be part of the dance. In Samba de Roda, the audience sings and claps to the rhythm. Ciranda is also another style where the audience forms a circle the dancers, while moving in slowly repeated motions. This is a great opportunity for you to be part of the dance. All you have to do is fall in line with the rest of the circle members, imitating their steps. It is a real fun experience as you get to live the different dance styles of the Brazil Dance. You may also be called into the circle to be one of the main spectacles of the dance. 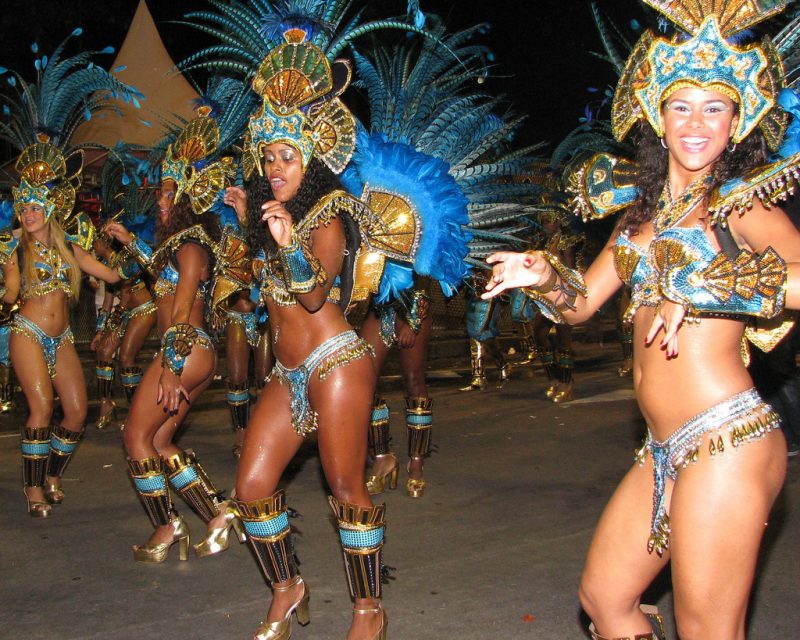 The Carnival is popular dance event in Brazil that you don’t want to miss out. It is always held for a six days, and forty days before Lent. It is a nationwide event that takes places for the whole 24hrs in a day. The main dance is the Samba dance with the dancers dressed in bright colors and different costumes to represent the diversity of the Brazilian nation. They parade through the streets, singing and dancing. It is a colorful and breathtaking scene to behold. Depending on your location, you may get the chance to be part of the parade, especially those who will be in minor towns. Everyone is in a celebratory mood at the Carnival and looking for some real time. Time to have fun. 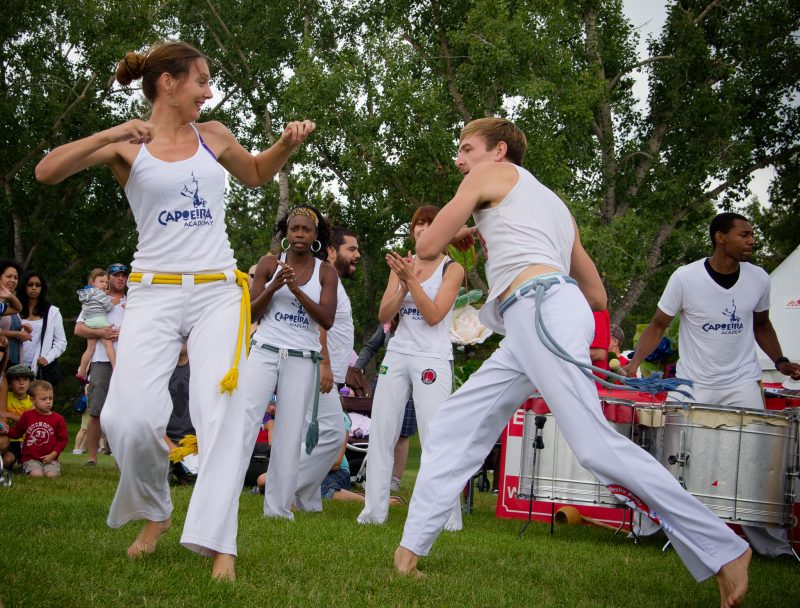 The Capoeira dance is identified by its martial art movements. It was practiced by those of the African origin during the slavery period. It was their way of resisting slavery and preparing themselves for freedom. It requires power and agility to move around. It is considered as a sport in Brazil and has been incorporated into their school curriculum as a way to inculcated citizenship in them. It is a great form of a game, secondary to soccer. Well, we all know Brazil for its soccer. Martial arts emphasizes on discipline, and that is why it has been accepted in the society. This influence is also spreading to the rest of the world. 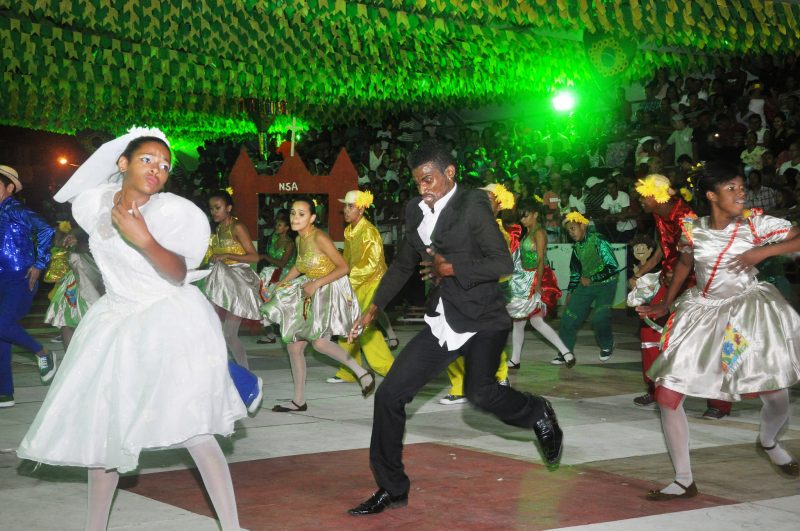 This is a festivity that has Spanish and Portuguese influences. It takes place in the month of June, and it involves, eating, drinking and lots of dancing. The primary focus of this great party is the Quadrilha Dance. This is a dance that includes the joining of a couple into one. It is a theatrical dance that tells a tale and at the same time, and it may be a wedding ceremony. Many couples take advantage of this time to get married. It is a dance that involves duos, male and female as they role play a wedding ceremony. They may at times reverse roles, in that, the women dress as men and vice versa.

Due to its famed dance, i.e., the Samba dance, there are schools opened specifically to teach dancing. The most common of these schools are the Samba Schools where one is taught the moves and the rhythm of the dance. Well, you don’t need any qualifications to get into one of the schools. All that is required is the passion and the urge to learn. The schools take part in the Carnival event as they compete to outshine the other. You could attend one and learn some of the moves. Brazil Dance is one that appeals to people of different origin and backgrounds. It’s time to get your groove on and put on those dancing shoes.