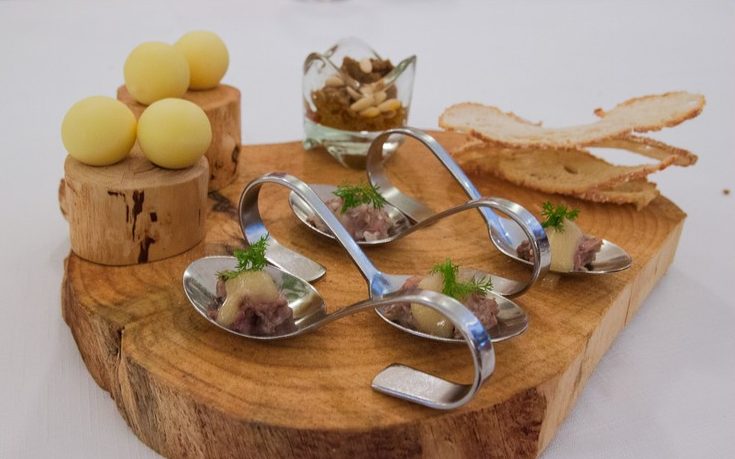 Located in the center of the mainland Spain, Castilla La Mancha and its sophisticated cuisine are a well-appreciated discovery for the traveler. Manchego cuisine, or Castilian-Manchego cuisine, refers to a great variety of traditional yet simple dishes and specialties of the region prepared using the most elementary and seasoned ingredients such as meat, bread and vegetables and accompanied by a wide assortment of region’s finest cheese and desserts. 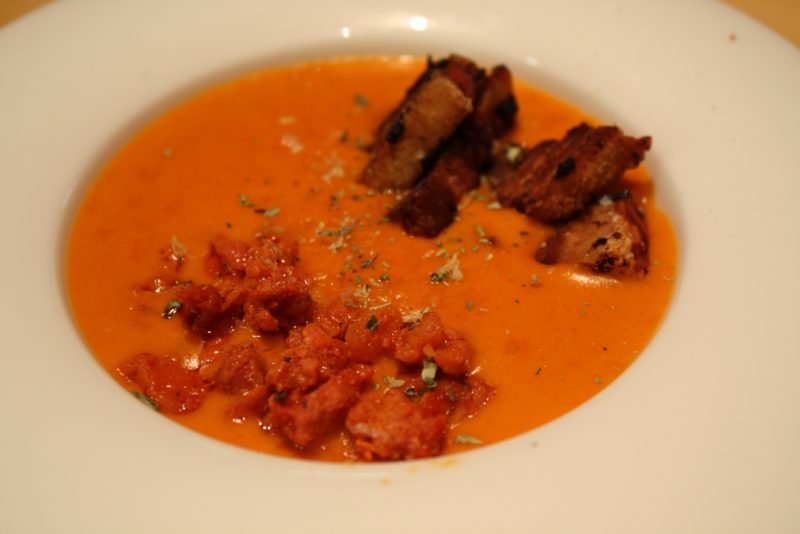 Gachas is a local traditional staple typical in the region of La Mancha, although different variants of this humble dish are served in other Spanish regions. Originally a food of the shepherds and the country people, consumed usually in the cold winter days, gachas are now widely consumed as a people’s favorite winter staple. 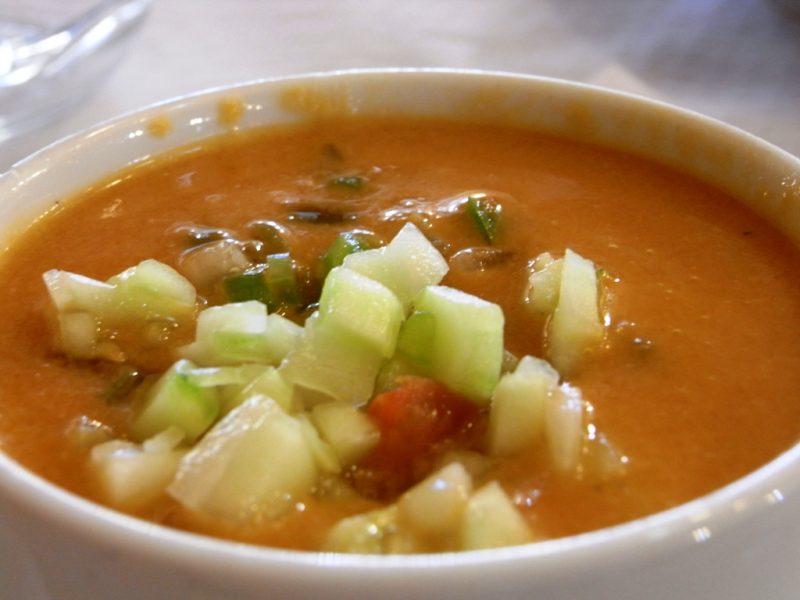 It may share its name with Spain’s infamous cold soup gazpacho which is usually consumed during the summer months, but this one here is a hearty, meat stew served on a loaf of bread and enjoyed with unleavened bread cakes. The only probable relation between the two is the bread used, but without the tomato. While gazpacho is originally from Andalusia, the Manchego version originates in La Mancha. 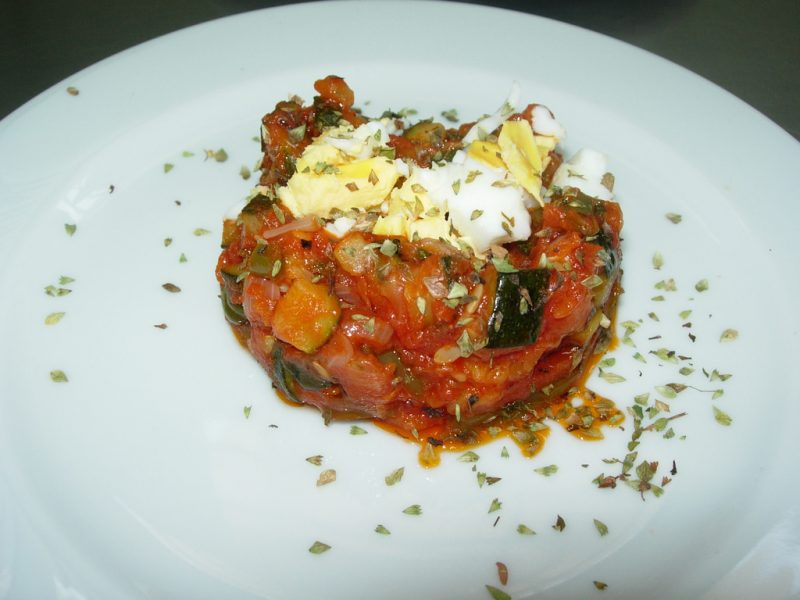 This Spanish ball pepper stew is quite similar to the much popular ratatouille and features eggplants, peppers, onions, tomatoes, garlic and olive oil. It is usually served warm to accompany a main dish or cold as a starter or with a fried egg and bread. Pisto can also be used as a filling for empanadillas, sandwiches, savory crepes, or little fluffy pastry pies. 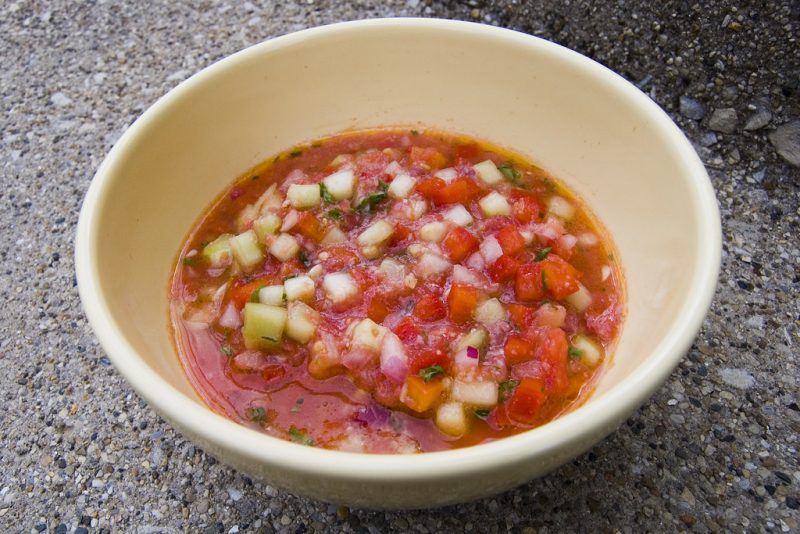 This simple salad is made of tomato, onion and cucumber, and pairs well with many seasoned ingredients or sometimes served as an accompaniment with tuna. The salad may as well considered as another form of the popular cold soup, gazpacho. The vegetables are beautifully placed on a small plate with the fine-sliced pieces of tuna on the top, and a little olive oil for the final touch.

A traditional dish typical of the region of La Mancha, atascaburras literally means ‘something that block’s the donkey’s way’, but don’t let the name fool you. It is basically mashed potatoes with cod, eggs, and walnuts. This rich recipe recalls the classic French dish known as the brandade, but without the milk and is authentically Spanish. It can also be served as a main course as it is rich in proteins. It’s a popular meal among the shepherds of the region, consumed in an attempt to beat the cold winter months. 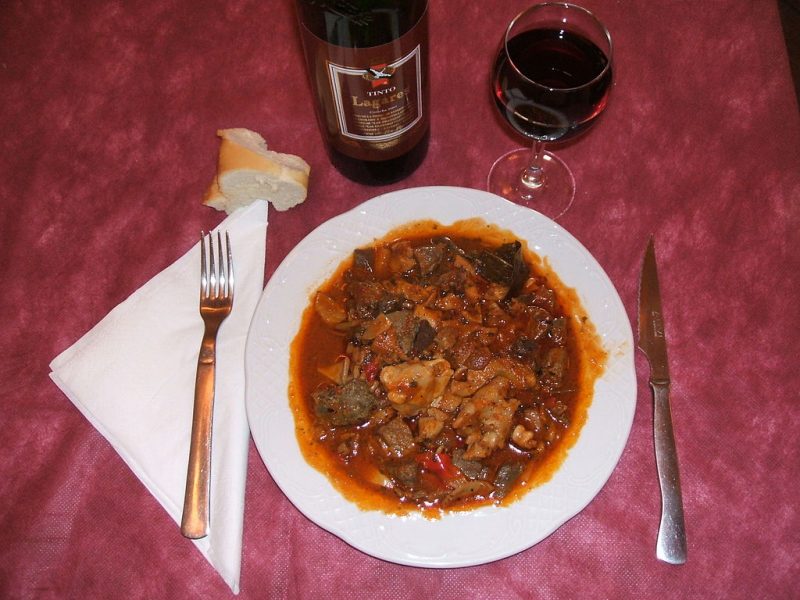 This is a medieval Spanish recipe which is believed to have originated as a meal for the shepherds. It’s originally a thick stew made using lamb meat, breadcrumb sauce, blood sausage, garlic, spices and olive oil. In some variants, blood is used as a seasoning, and like every other inherited dish, it varies according to the region.

Yet another well-known dish of the region is the carcamusa, a traditional recipe of the Spanish cuisine and a specialty of Toledo, often served as a bar snack, and made from seasonal veggies and pork stewed with fresh tomatoes and bay leaves. It is best served hot in a traditional earthenware plate accompanied by finely sliced pieces of bread.

This is undoubtedly the most singular dish of La Mancha and is quite different from other cod preparations in the Spanish cuisine. Although delicious, it requires professional hands, but well worth the time. It contains filleted salt cod and the vegetables used in the process are grilled over a charcoal fire, and the salt here, unlike other Spanish recipes, is kept in the running water until the salt completely washes off from the surface.

The Morteruelo of Cuenca is a rich Spanish delicacy typical of the region of Castilla-La Mancha that does not seem to lack the detail, thanks to the selection of carefully hand-picked seasoned ingredients and the natural products that goes into the making of this fine cuisine. Different variations of this recipe exist in the many regions, but the one thing that they all have in common is the slow cooking process of the meats with an addition of torta, a form of sweet, crispy flatbreads.

These light and fluffy bunuelos will actually melt in your mouth and make for a fine afternoon snack or dessert. Bunuelos are traditional pastries served in almost every Spanish region to celebrate All Saints Day. These lightly fried dough balls, dusted with powdered sugar or filled with pastry cream, are enough to sweeten your day.

7 Accommodations to Stay in La Palma

25 Things to Do in Tenerife

10 Restaurants to Go in Benalmadena