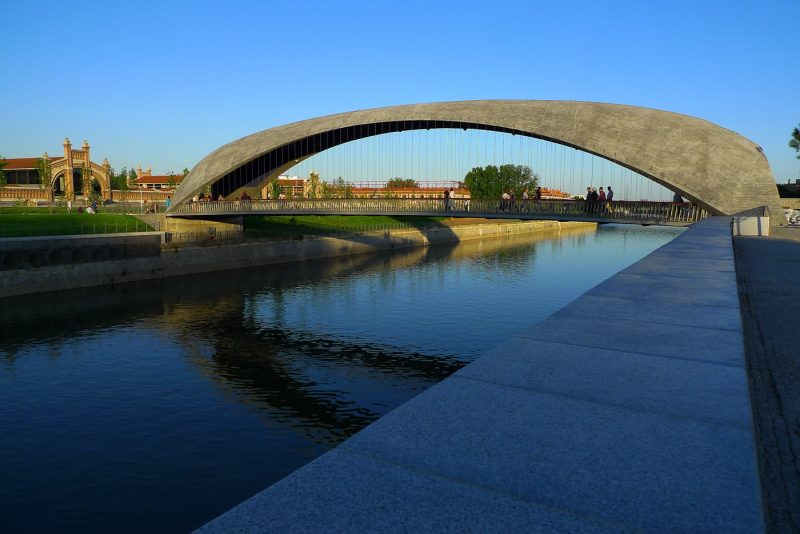 Madrid is famous all over the world for several things; however, the river is not one of them – though this opinion may be changing. Since 2011, Madrid Rio Park runs along the Manzanares River and becomes one of the different ways tourists are the Spanish interest today. If you’re visiting Madrid, you should come to Rio Park to see its urban beach, nature, and recreation areas on both sides of the river.

1. The Park in Madrid, Spain

Madrid Rio or Madrid River is a linear park that lies along the bank of the Manzanares River, in the heart of Madrid. This parkland lasts 10 kilometers and covers 649 hectares in six districts, including Usera, Carabanchel, Latina, Arganzuela, Centro and Moncloa-Aravaca. It plays an important role of the city and consists several sports facilities, nature, cultural interest, and an urban beach.

2. A Link to Green Spaces in the City

Discover Madrid Rio Park, which runs along the banks of the Manzanares River and take a nice walk. pic.twitter.com/DL0QqaPoux

Madrid Rio Park supports a link to several green spaces of the city. To the north, Rio Park connects to the Senda Real and the Green Ring, which is a road for the E7 trail and cyclists. To the south, Rio Park goes straight to the Enrique Tierno Galvan Park, the Linear Park of Manzanares River, an extensive green zone for the cycle routes and paths for runners and pedestrians.

Rio Park is a perfect place for strolling and cycling. It has 30 kilometers of paths for pedestrians and cyclists; the roads linking to Anillo Verde is a type of bike beltway and surrounds the capital; the paths from the north surround the mountains for cycling. In the south, the roads reach all the way to Getafe.
Besides that, Rio Park supports playgrounds for several sports facilities, such as tennis courts, soccer fields, a skate playground, a rock climbing wall, a BMX circuit and more.

4. A Large Area of Cultural and Environmental Interest

Rio Park is a great land of cultural, leisure, sporting, and environment interest. The theme park Faunia is a zoo and natural history museum combined. Its goal is educating and entertaining for children. It includes eight ecosystems from the tropical rain forest to the polar region and consists over 1500 animals.

5. The Park of the Manzanares River

Did you know Madrid has a river? Rio Manzanares. #Madrid #Spain #BeautifulSpain pic.twitter.com/YROXlO5c78

The Manzanares River flowing from the north to the south through a valley in the west of the city. In the past, it was the most important aquifer of Madrid, however, because of the standstill, it was never attractive. Today, a lot are changing since Madrid Rio Park was opened publicly in 2011. The park becomes one of the most beautiful green intervention in Europe in the last few decades and also the Manzanares river is attracting a huge of tourist every year.

Madrid is an attractive tourist destination, but it’s not a perfect place for visitors since you must take a long drive to the closest beach. Madrid Rio Pak has tried to change this inconvenience. An urban beach was built, which includes three artificial shallow ponds and spots surrounding them for people to relax. This beach is only opened in the summer for escaping the heat in the capital. Madrid Rio is one of the best urban parks in Spain. Its possibilities are endless. If you’re staying in Madrid, you must go to see this park for a relaxing day. You will be pleasingly surprised.

10 Unique Foods to Try in Madrid

10 Things to Know about Madrid Zoo

15 Accommodations to Stay in Madrid