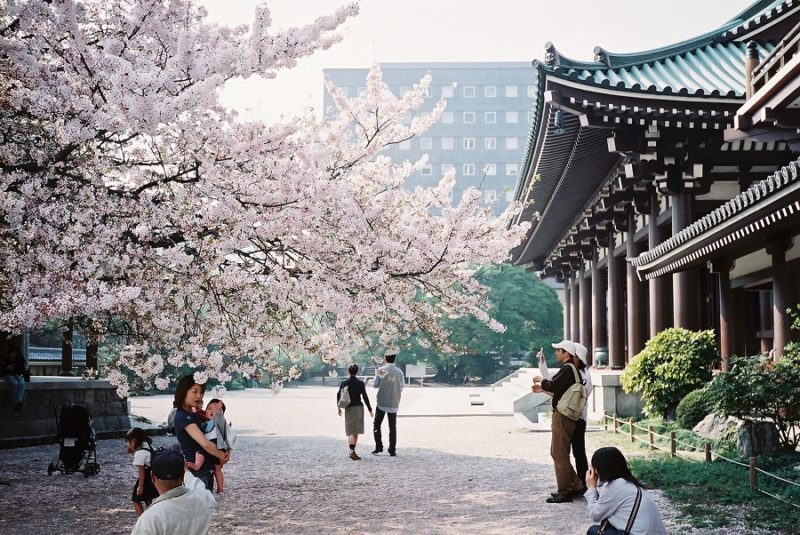 Located in the eastern part of Fukuoka City, Hakata is a ward of the said place with a size of 31.5 square kilometers. The area is made up of low-level grounds along the Mikasa River. At the northern west part, you can see the Hakata Bay, which currently has and ferry terminals.

Fukuoka’s major attraction is at the Fukuoka Asian Art Museum, which usually invite many artists from different countries in Asia to exhibit their artworks. An activity regularly performed by the organizers of the museum is the “Fukuoka Ajia Bijutsukan”. There are also a lot of workshops for the public who are interested in the arts.

Hakata is well known for being the prime producers of earthenware dolls or the Hakata-ningyo. These dolls are created by the clay commonly seen near the city. These dolls are usually molded into a human-like shape, by using fire to glaze the exterior and then painted with specially made for clay paints.

A beautiful and spirited summertime city festival with men running on the streets while carrying 1 ton of float on their shoulders. They usually do this as fast as they could. For tourists, it’s always an awesome and heartwarming sight to see a lot of men pulling all their energy so they can carry the heavy floats. This captivates the hearts of the visitors, spectators, and locals, who reaches as much a million people.

Often described as having a lot of festive dancing in the squares, it is one of Japan’s biggest citizens’ festival, celebrated throughout the past 800 years. The participants are usually wearing uniquely designed costumes as they walk in a parade through the streets of Hakata. You can see them clapping their shamoji spoons and then dancing in different parts of the town.

The “Hakata-ori” is a traditional Japanese weaving custom brought by merchants from China, into the region Hakata in Japan. It is set of weaving techniques from as far back as the 13th century. The Hakata weaving is comprised of the “hira-ori”, plain weave detailed beautiful designs; as well as the “mon-ori”, a twilled ribbed fabric with fine delicate patterns

The Tamaseseri is held in Hakata, Fukuoka, with half-naked guys running after a “lucky 8-kg ball” while being doused with cold water. The men only wear loincloths for the competition for the 8-kg treasure ball called “takara-no-tama”, which is 30-cm in diameter. It is said that this can bring great fortune for he man who can lift it over their head.

The Canal City Hakata is a big amusement and buying complex located in Fukuoka in Japan. It is called “city within the city,” because it has many attractions that include stores, diners, cafes, food stalls, restaurants, theater house, arcade center, hotels and the “canal” which flow through the complex. The place is commercial success and tourist destination in the city.

An important part of the economy of Hakata is the cruise ship tourism in Hakata port. Most of the visitors come from mainland China, with the great influx of tourist in 2010. More than 90 cruise ships came to Hakata in 2014. The port has since expanded and developed to recognize the tourism potential.

A popular nightspot destination in the river banks of Hakata River and Naka River, it has many different entertainment facilities, bars, restaurants, and nightclubs. Located in Fukuoka City in Japan, Nakasu means ‘island in the center (middle)’ in English translation, which describes Nakasu positioned between the two rivers. There are more than 3,500 establishments in the area, attracting more than 60,000 people every day.

Your visit to Hakata will not be complete if you don’t try ‘Mentaiko’, a marinated cod and pollock roe commonly served in Japanese dishes. It is said that the Mentaiko came from Korea, as brought by Toshio Kawahara who was born in Pusan Korea during the Japanese occupation. Mentaiko can be bought in shops in airports and train stations. The Mentaiko is best eaten along with Japanese rice balls while also having sake.

The Hakata ramen is a special variety of ramen that is commonly prepared in the region of Hakata. This dish has a milkier, rich, tonkatsu pork-bone broth, with somewhat non-curly and stronger noodles. It often has distinct toppings like crushed garlic, ginger, hot pickled mustard greens and sesame seeds. The ingredients are sometimes served on the tables of customers for them to mix.

The Motsunabe cuisine is a Japanese hot pot variety comprised of pork or beef stripe. It has a stew from the gut slices of different meat. This dish is prepared in a conventional cooking pot or sometimes in a Japanese pot called nabe. When the food is cooked, it is poured with pork offal, beef broth or soup.

If you like to have some sports action, you can visit the Level 5 Stadium, which is originally called the Hakatanomori Football Stadium. On March 1, 2008, it was renamed as the Level 5 Stadium. This sports complex is located in Hakata ward in Fukuoka City and the home stadium for the Avispa Fukuoka Football Club.

If you like to have a relaxing and meditative time in Hakata, you can visit the Rakusui-en Garden, a facility in the city of Hakata in Fukuoka. This place was created in 1906 for a merchant named Shimozawa Zenemon Chikamasa. It was renovated in 1995 and added four tea ceremony rooms.

The Shōfuku-ji Rinzai temple is situated in Hakata. This shrine in Fukuoka was created by Eisai, with the help of Minamoto no Yoritomo in honor of Ankokuzan. The construction of the Rinzai temple was successfully finished in 1195. The Shōfuku-ji is considered as one of he oldest Zen temples in Japan.

Hakata is somewhat raised and sometimes called Higashihirao. Just nearby the ward is the Fukuoka Airport, with the Hakata Station letting you reach the downtown Nakasu. Enjoy your entertainment and the main dining overseeing the Naka River. There are a lot more of sightseeing places and business establishments in Hakata.

7 Foods to Try in Fukuoka

7 Hakata Ramen to Eat in Fukuoka

10 Hotels You Must Stay in Fukuoka