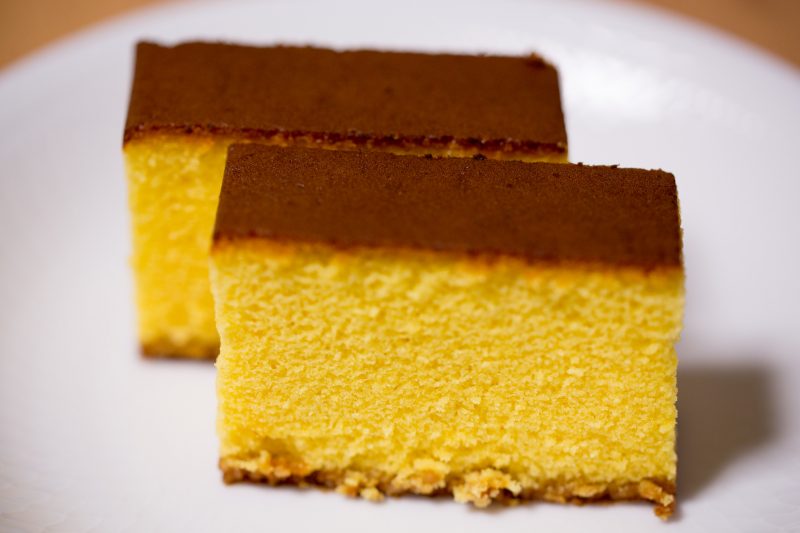 Castella is an old-fashioned Japanese confectionery and one of the delicious sponge cakes made from bread flour, eggs, sugar and starch syrup, but without butter. It’s moister than the traditional sponge cakes, with a slightly subtle texture that appeals greatly to the locals and visitors alike. Castella have been around for more than 400 years, and the Japanese have subsequently mastered the art of making the perfect castella. This delicious sponge cake is ideal for a desert session and most of the times, served during afternoon tea.

The castella was brought to Japan by the Portuguese missionaries in the 16th century. During the Edo Period, a special port was established in the Nagasaki Prefecture, called Dejima. This was then the only port in Japan open to foreign trade and commerce. The Portuguese have brought many unusual things such as tobacco, guns and pumpkins at the end of the Muromachi Period. The cake was able to help the sailors who were out on sea for months, as it could be stored for a long period of time.

Castella was originally introduced by the Portuguese missionaries, but further developed by the people of Nagasaki over years to better suit the Japanese palate. This fluffy desert is now a well-known souvenir of Nagasaki, served throughout the world in many variations. The Nagasaki Castella is a much refined and exotic version of the original castella.

Castella cakes are a favorite of Japanese people and tourists alike. There are a broad range of variations available for castella, with the same ingredients being used in each recipe, but with slightly different measurements. The key to making a successful castella is in the beating of eggs. The cake is most often flavored with honey, and unlike most of the cakes in Japan, this one’s made with bread flour. This is available in all kinds from mass-produced packaged foods to high-end gourmet labels.

Japan has its fair share of fine street food, and food culture in Japan has evolved tremendously over time with influences from all around the world. The Japanese are among the most enthusiastic, when it comes street food, where locals and visitors from overseas flock to over weekend for a rather exotic culinary experience. One such popular street food is the baby castella, a bite-sized version of the castella cake, with fillings inside.

Traditionally, the castella cake is baked slowly in a bottomless wooden frame to create the smooth fluffy texture for the sponge. The normal baking tin is believed to be too hot for the recipe. Some of them make their own paper boxes wrapped in layers of aluminum foils. Just 4 ingredients are used in the making of this cake – flour, eggs, sugar and honey. Matcha or cocoa powder can also be used as the substitute for honey. The important part is to beat the eggs.