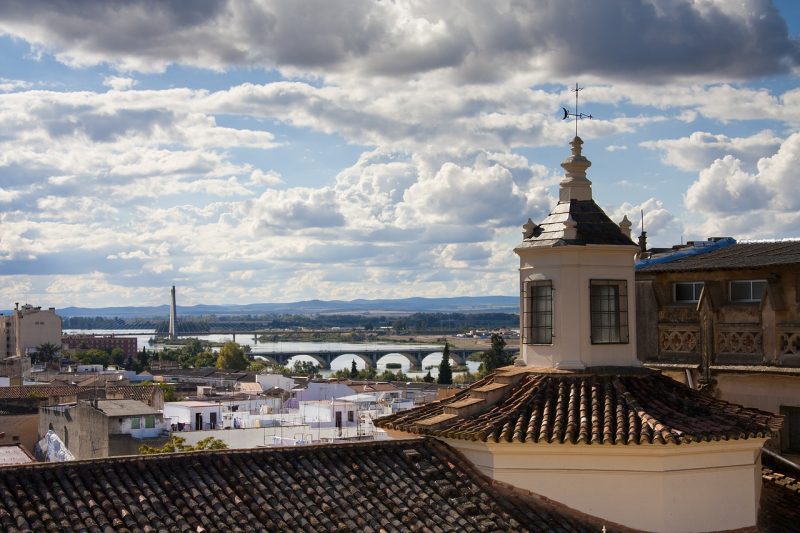 Beautifully studded with Moorish and medieval architecture, Badajoz is the largest province in Spain and the capital of the Province of Badajoz located on the left bank of the Guadiana River. Because of its central location, all the different cultures throughout the history of Spain share their influence over Badajoz, making it a significant cultural center. The Alcazaba is definitely the most prominent structure in the city which attests to the Moorish culture and there is a dozen of other notable landmarks that better describe the city.

1. The Alcazaba of Badajoz 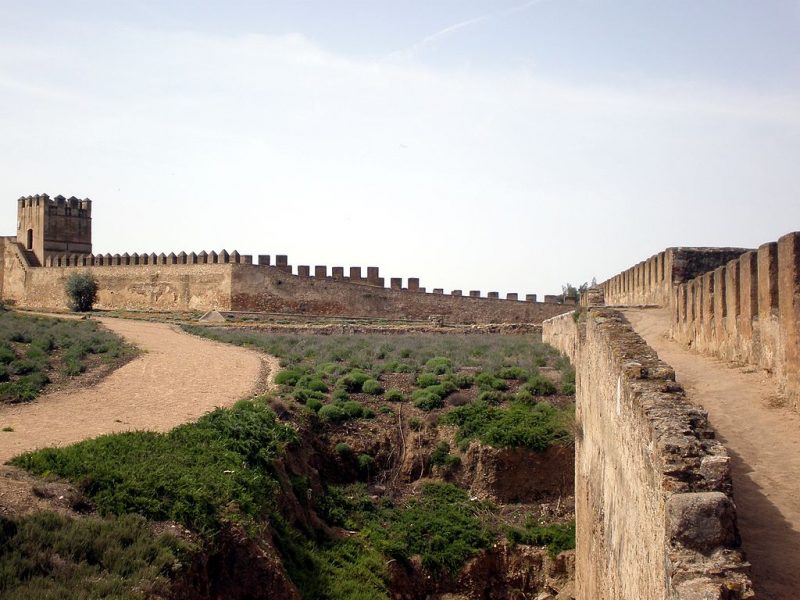 This is the most notable structure in the city of Badajoz which shares some influence with the ancient Moorish culture. Alcazaba is one of the best preserved Arab fortifications in the entire Spain guarded by an impressive watchtower known as the Espantaperros Tower. Inside the castle is the Palace of the Dukes of La Roca which is now home to the popular Provincial Archaeological Museum. 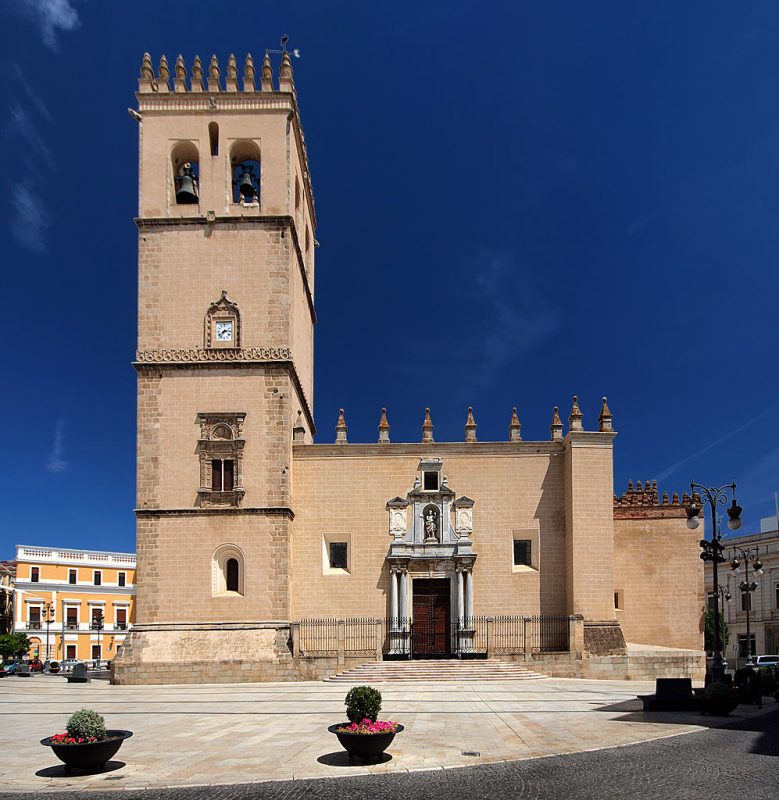 This 13th-century Badajoz Cathedral is a Roman Catholic church which resembles an ancient fortification from the outside with strong walls and bastions to keep it safe from the continuous wars in the city. Three of the cathedral windows are uniquely built in a perfect blend of Gothic, Renaissance, and Plateresque style. The façade itself is quite unique with one marble portal that was built in 1619.

Work of the renowned architects Jose Selgas and Lucia Cano, this is the congressional palace of Badajoz which houses the City Hall with the remains of the original City Hall still in ruins. The current building dates back to 1852 and the clock was a significant addition in 1889. The municipal architect, Rodolfo Martinez restructured the building in 1937 with a modern touch.

An exact replica of the Giralda in Seville, the La Giralda of Badajoz is a regionalist style building located near the Plaza de la Soledad which was built centuries ago. It is beautifully decorated with ceramic tiles and wonderful metal work with the symbol of Mercury embossed on it as the symbol of commerce. It is now a prominent landmark of the city. 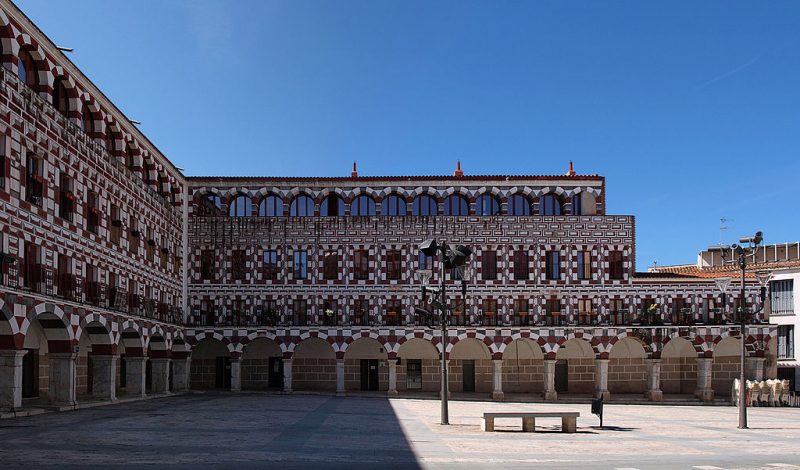 This is a wonderful central square in the heart of the city next to the Torre del Espantaperros and the Alcazaba. Markets were held under its arches in the Middle Ages and it also served as a prime venue for meetings and celebrations of all kinds. 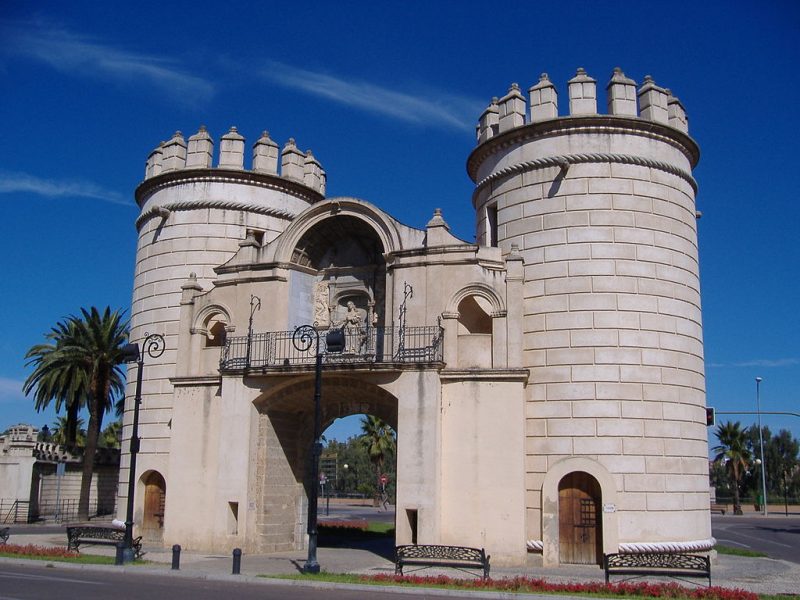 Two cylindrical towers and a commemorative arch flank the entrance door of the centuries-old Puerta de Palmas with a semi-circular façade decorated with the medallions of the shield of Emperor Charles V shield. Once a prison, the twin towers now serve as an entrance point to the city.

Located in the historic heart of the city, the Royal Monastery of Santa Ana is the headquarters of the Order of St. Clare in Badajoz founded by Ms. Leonor de Vega i Figueroa in 1518 under the jurisdiction of the Franciscan Province of San Miguel. Queen Anne of Austria, the wife of Felipe II, lived here in the city and buried in the convent until her remains moved to the El Escorial. The monastery went through a major restructuring in the 18th century and the original structure partly remains.

The Provincial Museum of Fine Arts is the premier gallery of Badajoz set in two palatial 19th-century homes right next to the Plaza de la Soledad. It displays more than 1,400 pieces of paintings and sculptures, engravings, and drawings, representing over 350 artists such as Luis de Morales, Zurbaran, Caravaggio, along with Flemish painters such as Felipe Checa, Eugenio Hermoso, Francisco de Goya, Pablo Picasso, and more.

The MEIAC is conveniently located on the site of the former prison of Badajoz which was built in the mid-1950s on the grounds of a former military fortification, known as the Fort of Pardaleras. The museum holds a significant collection of artworks by the renowned Spanish, Portuguese and Latin American artists.

The Fair of San Juan is a week-long celebration within the city walls that transformed the city into street markets. The fun begins at the morning in the heart of the city as the people parade in the streets enjoying beers and wines and move to the spectacular fairgrounds in the evening. Thousands of lights illuminate the grounds packed with stalls and shops selling all kinds of fancy stuff.

10 Things To Do in Caceres:Spain

10 Restaurants to Go in Nerja