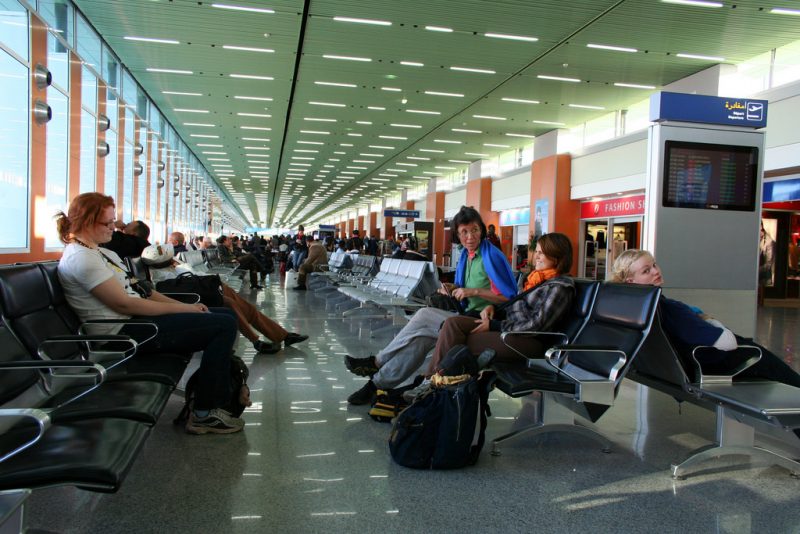 The famous French term for Casablanca airport is Aéroport international Mohammed V. and the Arabic term for the airport is Muhammad al-Khamis ad-Dowaly. The airport is named after the late Sultan Mohammed V of Morocco.

2. It is the busiest airport in Morocco

There are a thirty-three of airports in Morocco three of them are military airports yet Casablanca International Airport is the busiest of all with approximately 8 million passengers passing through the airport each year which is why they are currently expanding the airport to cater more passengers.

3. It is the largest airport in Morocco

Casablanca International Airport is the largest airport in Morocco and because of that, it has a network of approximately 100 destinations by 23 airlines and they are still expanding it today which makes them the best airport in Morocco. Africa is the continent with the most connections in this airport as well.

4. There are three terminals in the airport

Casablanca Mohammed V international airport has three terminals. Terminal one is still being renovated and expanded to triple its capacity from 7 million to 23 million passengers, while all international flights being operated by Royal Air Marroc is in Terminal 2 and Terminal 3 is so small that is not used very often.

Casablanca Mohammed V international airport is the hub for Royal Air Marroc, Air Arabia Maroc, Ram Express, and Jet fairly. There are 23 airlines with routes to and from this airport with approximately 100 destinations including Jeddah, Agadir, Dubai and Paris and Marrakech.

You can get to and from the airport by train, taxi, and a car hire. There is an airport served train with a frequency of 1 per hour and the station is located in the basement of Terminal 1 and the taxi rank is just located on Level 0 of Terminal 1.

Royal Air Marroc is the dominant airline in Casablanca Mohammed V international airport which serves 65% of the passengers in this airport that having Terminal 2 is especially for their international flights because of all the airlines operating in the airport they have the most incoming and outgoing flights to different places all over the world.

8. The busiest months are August and September

August and September are the busiest months in Casablanca Mohammed V international airport because of the school holidays and people would usually come and go to this place especially tourist or locals because Morocco is much more lively during these months.

Casablanca Mohammed V international airport is a very convenient airport that has facilities such as the post office, bank, foreign exchange, restaurants, cafeterias, bars, VIP lounge, Pharmacy, Duty Free shop, Travel Agencies, Tourist help desk and so much more that you won’t need to go out if you need something.

Casablanca Mohammed V international airport was originally built by the United States on 1943 during the World War II not as a passenger airport but as an auxiliary airfield for Casablanca’s Anfa Airport. The aiport began to be the stop over of en route aircrafts  Port Lyautey Airfield, and to Marrakech Airport that has the route of  Cairo–Dakar.

Since Casablanca Mohammed V international airport was not yet a passenger airport its first name was Berrechid Airfield during the World War II until the late 1950’s where they changed it into it’s present name as it was closed and reopened for some reasons.

12. Airport was closed and reopened as Nouasseur Air Base

On the early 1950’s the airport was closed because the military no longer used it but then reopened as Nouasseur Air Base and was used by States Air Force as staging area for B-47 Stratojet bombers that is pointed at the Soviet Union. Even today most locals still refer the airport as “Nouaceur”.

14. There is a VIP service membership

15. There are a lot of restaurants and cafes

If you feel like you need to grab something to eat or drink, there are a lot of restaurants and cafeterias inside the airport for you to choose from with a variety of food range from fast food to asian foods and so much more making it easier for you not go outside and find a good restaurant.

15 Things to Know about Morocco Mall

10 Accommodations to Stay in Casablanca