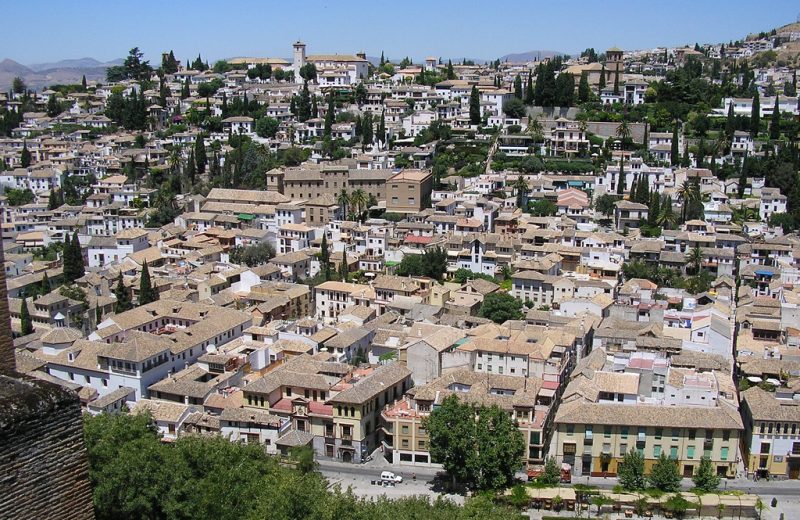 Source: Nigel’s Europe And Beyond

Granada, is a picturesque city, the capital of Granada province, located at the foot of Sierra Navada mountains, at an elevation of 738 metres above sea level. It is at the junction of four rivers the Beiro, the Darro, the Geniland the Monachil.  the city is home to various architectural beauties. Here are 10 accommodations to stay in Granada:

This is a historic luxurious 5 star hotel in an ancient building, dating back to the 16th-centuryThe hotel includes upscale rooms having wood floors, arched windows, ornate rooms and mosaic tile bathrooms. The hotel also offers free WiFi, flat screen TVs, and mini fridges. It is also full of amenities like breakfast buffet, terrace restaurant with the most delicious andulasian cuisine. It is easily accessible being only 1.8 km away from the Moorish Alhambra complex.

An unassuming yet beautiful hotel which is a seven minute walk from the Royal Chapel of Granada, is a straightforward building. It offers en suite bathrooms, free WiFi, a lobby, lounge, and computers for guest use. The top floor café also offers a picturesque view of the city. The best of amenities include free stay for children under the age of 12. This is one low budget 3 star hotel set on a bustling street of the city.

Another historically constructed, ancient building set on a cobbled street, this boutique hotel is in the Albayzin district at the foot of Alhambra palace complex. The rooms are individually decorated and some of them feature terracotta tiled floors, dark wood furniture, and original artworks. The hotel provides free WiFi, TVs and upgraded rooms provide balconies and views of Alhambra. The hotel also has a bar, a lobby, a 68 ft mural, a courtyard and a library.

An ancient, 16th century built charming hotel features an Andulasian inner courtyard. The hotel offers simple rooms with wood floors and exposed beams and antique furnishings. The amenities include free WiFi, TVs and minibars. Some upgraded features include living area with sofas and views of Albayzin quarter, also with rustic décor. The hotel provides breakfast buffet and parking area with fees for both. There are also casual lounges with TVs and a fireplace that add to the home like feeling of this wonderful accommodation.

An early 20th century creation, resembling the Moorish fortress, the hotel is known for its Mediterranean and Moorish culture décor. The rooms out here are airy, elegant with views of the Alhambra Palace or rooftops of the Granada city. The suites have separate living rooms, and a lounge in the lobby. The restaurant in the building serves international and regional cuisine and has the best panoramic views and a terrace too.

This is a modern and classy hotel with ease of access since it is located at the heart of the city of Granada. The conservative style of this hotel is adored by the many guests. The rooms are private and feature flat screen TVs, free WiFi and minibars. Some of the upgraded and refurbished rooms also have private terraces and picturesque views of the mountains. The international and regional cuisine is served as breakfast buffet in the casual dining area. The hotel also has a fitness center and a bright restaurant.

A posh 19th century palace in a striking modern building, Hotel Hospes Palacio de Los Patos is an easily accessible hotel and one of the best accommodations to stay in Granada. The rooms are made in a contemporary style and the suites feature free Wifi, flat screen TVs and city/ garden views. The palace interiors are eautifully designed with mosaic tiled floors and ceiling murals. The luxurious suites feature living rooms, opulent bathrooms and balconies with picturesque views. The restaurant has a patio and there are also spa, thermal pool and sauna. It is another must visit in Granada!

An ancient renaissance hotel from the 16th century, Casa Del Capitel Nazarí Hotel S. XVI is easily accessible and bright. The rooms have expose-beam ceilings and tile floors. They also feature free WiFi, flat screen TVs and desks. The picturesque beauty and historical architecture gives the place a different ambience. Also, the delicacies of the cuisines offered by the restaurants are a must try. The breakfast buffet is offered for tea and there is also a café with mosaic tiled floor and comfortable patio.

Hotel Dauro is a classic brick hotel in central Granada. The rooms are sophisticated featuring wood wall accents and beautiful views. The hotel provides free WiFi, flat screen TVs and safes. Some of the rooms are upgraded to have lounge areas and balconies as well. The buffet breakfast is served in the casual dining area. The hotel is laid back in style with bars, lobby lounge spot, comfortable chairs and a business center. This is one of another relaxed accommodation to stay in Granada.

H2 granada is located right next to the Granada bus stop, and is very easily accessible. The rooms are understated and sophisticated. They are styled with parquet floors and provide amenities like free WiFi, flat screen TVs, minibars, desks, and bottled water. The hotel also has a streamlined restaurant offering a casual bar and picturesque views of Alhambra throught the terraces. There is also a business center, fitness center and a steam room.

These were some of the best accommodations to stay in Granada, Spain, the picturesque and ancient city. Chose your favorite, chose the one that suits your vacation and pocket, and get going!!

10 Nightlife to Enjoy In Granada